It’s upsetting that Chapter has had to delay its Experimentica festival till spring next year. In the meantime, those keen for the Avant-Garde, are spoiled with a mini Experimentica, thanks to a collaboration with Artes Mundi.

Greg Wohead has been a familiar face around the Cardiff cultural scene. Whether its disturbing people with his take as the serial killer Ted Bundy, or delighting us with his supposed imaginative tales from a Come Dine with Me episode, he never fails to create theatre which is of worth and intrigue.

Here however is testament to his obsession with an Elvis comeback special of 1968. He claims to have seen it over 100 times since first being witness to it in a hotel room some two years ago. With the notion of repeating past events, this Brechtian dissection of the televised event attempts to contextualise it, only this time as a work of theatre. You don’t have to be a lover of The King to like this, but it could help.

The event was make or break for Elvis, but the adoration seen in his fans is eruptive. In one remarkable moment, a fellow band member notices a piece of lint on Elivis’s cheek. He goes over to inform him,  delicately removes it from his face and then gives it to a frantic audience member. This moment is beyond absurd and repeated innumerable times for us to digest and reconsider. Audience members are asked to play roles in it. The collabortion seen here, is a highlight of the show. Wohead singing Love Me Tender, as this silly lint moment is screened again, (this time in super slow motion)  had me in a bout of hysterics.

Wohead has a charming Texan deadpan that is an unmistakably attributed to him. This work does not justify the 70 minute running time and the metaphysical nature of it could only appeal to a few. I usually don’t share my loves with other people as they usually criticise them. His dance work ended the night with a disjointed flurry, throwing his handkerchief into the audience that an adoring fan shall keep for years to come. Maybe a film work could have work better? Or this is most likely missing the point? 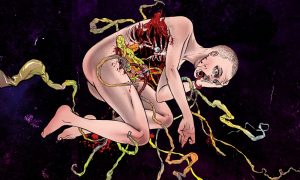 With last years glorious This Is How We Die, Christopher Brett Bailey has slammed toward us another remarkable event: Kissing the Shot Gun Goodnight. Where This Is How We Die was mostly a reading (and what a reading!). Kissing the Shotgun Goodnight is essentially just a concert, with rare smatterings of spoken word. In no way a negative, the effect of the performance left most astonished at the miraculous musical onslaught we had just been a witness to.

The trio of violinist Alicia Jane Turner, George Percy on electric guitar and Bailey also on guitar is pure dynamite and just as explosive. The piece reaches 100 decibels and even is daring enough to go to 120. This must have been what Krakatoa sounded like. As a concert alone the work is enthralling in minimalism, heavy metal, prepared piano corpses (John Cage lives in these moments) and synthesised bliss. Bailey’s writing is a queasy metallic concoction of fever dreams, body horror and vivid erotica.

This is Bailey’s vehicle and he has some great moments: spinning his mic around, a LA a rock band, thrusting his guitar to the speaker to create feedback and his adorable little “thank you” at the very end, are true highlights. The joyus recovery from his work is different for everyone. We were even provided with ear plugs, though I had learnt from last year and I brought my own!

Heaven knows what on earth we will put on next…

Kissing The Shotgun Goodnight tours to the Attenbourgh Centre For Creative Arts, Brighton on 24th November 2016.

An extended performance of Satie’s Vexations take place around Cardiff starting in October till new year, as a fundraiser for OCD UK, with such venues as the Wales Millennium Centre, the Cardiff Masonic Lodge and the YMCA as locations. We also need more musicians, venues, rap artists and artists in all fields to help to complete the piece. Follow #CardiffVexations on social media to see more!

Blackbird @ The Other Room, Porter’s Cardiff