We’ve just had word that Gavin and Stacey will return for a Christmas special. Considering its comedic worth for Wales, it has been emulated many times, with numerous tributes abound. But who would have ever expected opera to mingle with the south Wales drinking scene in such a way?

Look no further than Daisy Evans’ new production and translation of Donizetti’s opera Don Pasquale, now transported to the grimy back street of Cardiff’s nighttime antics. The story of mistaken identity is now made contemporary through the gaze of catfishing, and remarks about class are seen through the gentrifying vein of dining establishments. Whilst this production is set in the Welsh capital, Cardiff is one of the few places it is not actually going on tour. Sat with this audience, who all seemed to be having a great time, does this cheeky reimagining work? This opera lover would wholeheartedly say “yes, butt!”

Loren Elstein’s set impresses with a rather real looking Donner van, with all the trimmings. Evans’ witty new words for the libretto are full of winks to Cardiff, the dialogue now sounding native, only a few of the international singers accents’ betray the local landscape. Andrew Shore is a comedic triumph as the Don, proven by his experience in the role, recording with English National Opera etc. His Welsh/faux Turkish (possibly Greek?) inflections make us roar with laughter, along with his showing off his weightlifting skills. This is his bread and butter, though its refreshing to see him try out a random new interpretation of the role. Norina here is played by Harriet Eyley. I could hardly hear half of what was sung in here first aria, as she whipped out Fifty Shades of Grey (yes, really) atop her mobile juice parlour. As the only female lead, she maintains a quick vocal wit when in disguise, though you would think she was from near Llandudno with an accent like that. 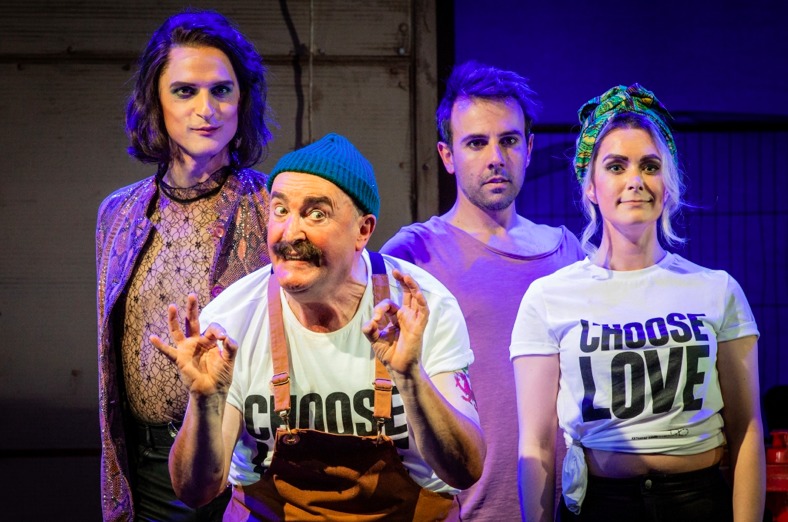 Malatesta here is Quirijn de Lang, clad as a glam rocker as if plucked from Barry Island. Though his accent is decent, it is the including of it into the score which makes his voice sound of a lesser quality than it should be. He is cunning in the role, with a swift, mischievous quality as he tries on the Don for size.

Shout out to Nico Darmanin as Ernesto. A familiar face having been in WNO’s Don Giovanni and Barber of Seville, alongside winning the Overseas Prize Winner of Cardiff Singer of the World back in 2015. Here is a pop star wannabe, brimming with a sexy charm and some great dance moves, though we’ll excuse his rendition of the Floss as just a fleeting fad. Malta should be proud of Nico, who has a belter of a tenor voice, prefect for this repertoire. An absurd cameo also from Bryn Terfel on Skype (as the lawyer to finalise the fake wedding) is one of many highlights.

Vegans also get a lambasting in this show, a satisfying catharsis for anyone who has ever been lectured about meat eating and ethical sourcing of produce. The clever way in which the kebab shop is turned into a pop up vegan joint is very funny, even down to the signage and drastic change in their tables and chairs. This comedy is still funny after 200 years thanks to the bold efforts of this cast and crew, who make the piece a much needed gateway for those unsure to take the opera plunge. This avid opera nut would say “take the plunge now in a minute!”

This is one hazy, inebriated treat, you wont regret in a hurry.

Don Pasquale continues on a tour around Wales & England till 13th July 2019.