It was a riot of a performance (not literally of course), when the new musical based on the early career and music of The Kinks, Sunny Afternoon, arrived at the WMC last night. A momentous occasion especially given that the last time The Kinks were in Cardiff it had actually led to a full-scale riot.

Casual listeners are warned however that if you have turned up expecting some whimsical story woven in between what is essentially a jukebox musical, along the lines of other shows such as We Will Rock You or Mamma Mia, you are in for a rude shock I can tell you.

Not just a jukebox musical like We Will Rock You or Mammia Mia, Sunny Afternoon has a real story behind it.

The story of Sunny Afternoon is the story of the gruelling nature of rock music during the 1960s. A time of great cultural and musical development but a time also of great exploitation of people’s lives and creativity as evidenced by the story of The Kinks and the Davies brothers in particular.

But apart from the music at the heart of this story, there’s the emotional roller-coaster of what it was like for four young London boys from Muswell Hill, who were thrown out into the world of music publishers, contracts, union chiefs, recording producers and irate female fans and made to either sink or swim. 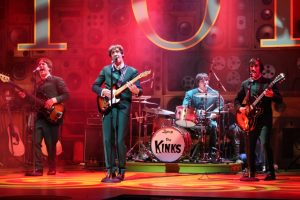 That is not to say that Sunny Afternoon is a misery fest in the style of Les Miserables. The hits are featured heavily in this musical, but with the added bonus of fitting beautifully with The Kinks own story as they were one of the few bands during the Swinging Sixties to document the tolls of the rock star life.

The musical focuses on the early musical career of The Kinks between the years of 1964 and 1967. With the first act focusing on their early days playing as The Ravens before launching the world’s first punk rock/heavy metal record with You Really Got Me which was to start an unprecedented phenomenal run of nearly 20 Top 40 chart hits between 1964 and 1970.

A disastrous American tour leads to turmoil and mental breakdown.

The second act then covers their disastrous 1965 American tour which culminated in The Kinks becoming the only British Invasion act to be banned from playing America, a ban which would last for the rest of the decade and which drove lead singer and songwriter Ray Davies into a mental breakdown.

The Kinks would shrug off this calamity by focusing on writing and recording strictly English records about the life of normal everyday people, recording and releasing the titular track Sunny Afternoon during the summer of 1966 to coincide with England’s World Cup win.

The emotional apex of the musical comes in the latter half of the second act with a cavalcade of emotionally powerful but relatively unknown songs such as Rock ‘n’ Roll Fantasy, A Long Way from Home, Too Much on My Mind and the ever poignant classic Days, revealing the creative and emotional genius of Ray Davies’ music.

The second act builds with one emotional song after another.

The story of Sunny Afternoon culminates with the playing of one of The Kinks most famous songs, Waterloo Sunset, the creative process of which forms the basis for the last scene of the musical. It is a scene that, much like the song itself, evokes such loving devotion and hopeful wonderment from all who behold it.

The audience is then invited by the band members and performers up onto their feet to enjoy a final crashing medley of Lola, All Day and All of the Night and of course You Really Got Me, in a one last hurrah before the shell-shocked audience members must return home with those iconic songs still ringing in their ears. 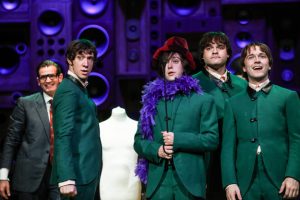 It’s a visually impressive and brilliantly performed musical but there is one slight drawback; that being the drum kit that is played live onstage by performer Andrew Gallo, who plays Kinks’ drummer Mick Avory. Gallo enthrals us with an impressive drum solo but which has the adverse effect of occasionally drowning out the all important lyrics being sung by the other performers.

But apart from that there are no complaints here from this reviewer who thoroughly enjoyed this heart warming and beautifully performed musical that uses so wonderfully the all-impressive music of The Kinks and Ray Davies so well that you won’t want the show to end.

Want to help other young people change the world?