Another hot summer night, another performance to review; only this time, the performer is one of the last great underground artists from the 1960’s who is still alive and working today.

John Cale, born in Garnant in Carmarthenshire, just north of Swansea, started his musical career in New York when he co-founded (with the late Lou Reed) the most influential rock group of all time, after only The Beatles.

Since then, he has collaborated with a plethora of artists, including artists like Terry Riley, Brian Eno, Squeeze, Patti Smith and Nick Drake; in all manner of different musical genres, whether it be drone, baroque pop, avant-garde, electronic art rock or proto-punk.

But, tonight at St. David’s Hall, Cale is not here to play the hits, nor is here to play in the conventional style. He is playing songs from his latest album, M:FANS, which embraces the fashion that many artists (among them Jeff Lynne, Jeff Wayne and Van Morrison) have been indulging in recently: revamping old recordings by re-recording them with new technology.

M:FANS, as it happens, is a re-recording, with electronic beats and synthesised sounds, of Cale’s 1982 album Music: For a New Society. Cale opens his performance with several songs from the new album, among them If You Were Still Around and Close Watch, and continues in similar fashion from there onwards. 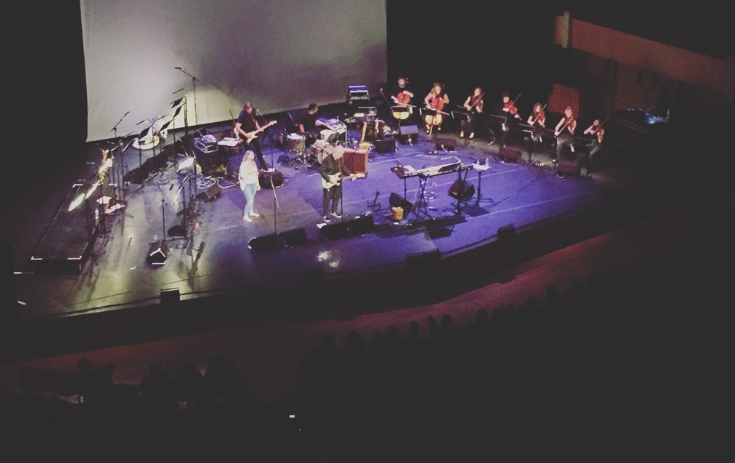 It is only towards the middle of the performance that Cale shows that he is enjoying himself. With the backing of a string quartet, a horn section and the in-house choir at St. David’s Hall, he performs some upbeat and brilliantly articulated versions of some of his better-known songs, among them Ship of Fools and I Wanna Talk 2 U.

There are, of course, a few surprises in store for the audience, some hotly anticipated, whilst others perhaps bringing forth some apprehension. Among the more cheerful surprises were the arrivals of Michael Sheen (to perform a spoken-word version of the Dylan Thomas poem And Death Shall Have No Dominion) and Charlotte Church.

Other surprises included heavily rearranged and reformatted versions of some of Cale’s better songs, which included The Velvet Underground classic, Sunday Morning and a somewhat perturbing version of Style It Takes from Cale’s collaborative album, Songs for Drella from 1992 with Lou Reed.

Throughout his entire performance, Cale showed himself time and time again, by sticking true to form, what he was and always has been: an underground artist. He is an artist who does not stick to any conventional rules when it comes to either recording music or performing it for that matter, which, in some ways, can be a positive thing, especially for those who don’t mind a little volume for volume’s sake.