The theme of secret languages is much more apparent on Experimentica’s second day. Beginning with performance artist anti-cool and her first documentary work Plena Rondo – Leaving Language was a wonderful way to start things off. The film details her love of the created language Esperanto and how much of it could be digested in a 60 day period.

It’s an infectious piece, as you begin to feel a love for the language and you realise there are more speakers globally than expected. It’s certainly the most nerdy created language not taken from a work of media (Klingon and Na’vi etc). In a post show talk the audience questioned the near cult like appearance of speakers and their conferences. The ending footage of burning flags of numerous countries with the Esperanto flag proudly remaining was considered inflammatory (no pun intended). The fact of why a language would also require a flag was also raised (again, no puns). Though as an audience we questioned, we were never kurt or harmful towards the film nor the language itself. In short: more people should speaker Esperanto! 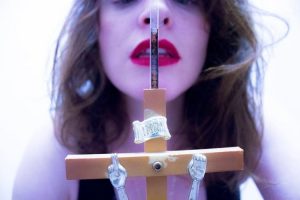 Tickets for Rachael Helena Walsh’s show were like gold dust, having been fully booked for days. Lingering around the box office, I was lucky enough to grab a last minute ticket and jogged to the Studio. In Catholic Guilt, lies a beautiful and incredibly personal work of theatre about all the trapping of growing up Catholic in Ireland. As a performer, Rachael is approachable and never shies away from deeply troubling topics.

The work at times lingers in the awful truth of child abuse in the church and our hope that nothing bad did happen to Rachael as a child. Her A to Z of what it means to be Catholic is witty, filled with insight and is a swell ice breaker to begin the show with. Candles, jugs and a bathtub dominate the space as plastic wrapping drapes the far side of the studio. Her extended confessional scene with a strobe light behind the plastic and the ominous sound work is a memorable and triggering highlight.

Using her own testimony and that of others who experienced abuse, we hear the horrifying events that occurred in the church and those involved in keeping these events secret for who knows how long. Where the show falters (only slightly) is Rachael torturing us with home video of her as a girl at one of these laborious ceremonies. It simply goes on too long, almost doubling the billed length of the show. Aside from this, it was a brilliant piece of theatre.

Ending the day was The Man Stands Alone in the Vortex by Tim Bromage. The penny dropped during this performance as I finally realised that Tim uses Jim Dahl as a theatre name. The character of Jim has been part of Experimentica and madeinroath in the past, but what would we see different from Tim this time round?

This strange cocktail of Twin Peaks, Midsummer Murders, crooner karaoke, disguises and magic is a heady mix which I usually find fairly convoluted. The murder story is less than interesting, even through Tim’s deadpan and attentive delivery. Reviews from the past speak of my disdain for magic (theatre itself is the true magic form). Even with some WTF moments, the tricks shall always have a logic and revelling quality to them, even if we are not able to know exactly how they are done.

There is more secret language to speak and listen to.

Review: Focus on Messiaen: Between Heaven & the Clouds Day #3 @ RWCMD