The WOW Women’s Film Club is a film club based in Cardiff spearheaded by local artist, Rabab Ghazoul and a small collective of dedicated workers and volunteers to do pop-up film screenings. 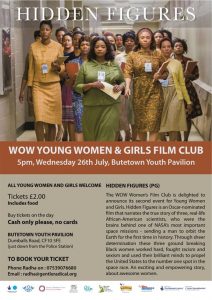 The club has been running for nearly 12 years and provide accessible film screenings across the city of Cardiff in both well known and older venues such as Butetown Pavilion and Riverside Warehouse.

Ever been too skint for the cinema? No worries – the most these screenings will set you back is roughly five pounds, and that usually also includes food. Plus, there are concession rates available for people who are unemployed, or only working part time. Tickets are free for asylum seekers and refugees and most screenings include a creche to ensure that everyone is able to come.

A huge number of films have been shown by WOW Women’s Film Club over the years, including the hard-hitting documentary The Hard Stop, The Black Power Mixtape and the profoundly powerful Academy-Award nominated Mustang.

As part of an initiative to increase youth participation, the film club have been organising specialist film showings aimed at young people aged under 25 years old. Radha Patel, the WOW Women’s Film Club co-ordinator, “WOW Film Club provides affordable and accessible film screenings of the best of independent and international cinema for young people and creates safe environments for them to raise their voices, explore their agency and talk about issues that are important to them”.

The next showing is aimed exclusively at young women and it’ll be a showing of the award-winning Hidden Figures on Wednesday 26th July at Butetown Pavilion.

The film is about African American mathematicians working at NASA during the space race between the USA and Russia. Hidden Figures was nominated for three Oscars last year, made over 230 million dollars worldwide boasting a cast of Octavia Spencer, Janelle Monáe and Taraji P Henson and supporting roles from actors such as Mahershala Ali (who won best actor at the Oscars this year). Tickets are £2, and that includes pizza, too. I mean, at that price, it would be rude not to?

For more information on the WOW Film Club or to get involved with the youth screenings, why not like their page on Facebook or contact Radha on radha@gentleradical.org

Things to do for Halloween in lockdown