“It began as a mistake”

Bukowski was a drunk. He was a godforsaken drunk who according to him, led a meaningless existence. Yet this does not explain our fascination with his words, nor the sorrow we feel when we realise we relate to his writing a lot more than we probably should. The funny thing about Bukowski and his literary genius is that he didn’t really have any.

What he did have is a heck of a lot of experience and a certain aptitude at seeing people for what they were, which in turn is a lot more valuable to a writer than an extended thesaurus.

What exactly is the book about? Quite simply put, it is a commentary on the mediocre ‘hand to mouth existence’ of Henry Chinaski, the literary version of Bukowski over a 17/18 year time period. He works a repetitive job at the Post Office, paying for his alcoholism, betting, womanising and any other toxic past time somebody of his calibre would be involved in. His excuse of a life has the same comedic value as a room full of people laughing at the terrible circumstances of another.

‘Relentlessly jokey’ said the Observer, hitting the nail on the head.

The entire experience of reading Post Office can be likened to the sarcastic and even nihilistic jokes one might make while living in the gutter of modern life itself, rolling cigarettes from week old newspaper found on the pavement and stolen soggy tobacco. The characters come and they go as the please, with little or no significant reaction from Chinaski. He works day in day out in the Post Office where it would seem all humanity goes to die. Humdrum indeed. 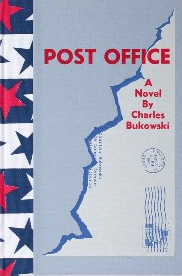 “I wasn’t much of a petty thief. I wanted the whole world or nothing.”

Before reading Post Office I hadn’t had much exposure to Bukowski. Sure, I had read some of his poems in the past, assuming he was just another low life poet who put his woes to paper. Then I was lent a copy of his debut novel from a special friend. What followed was a self-inflicted isolation of roughly 5 or 6 hours as I sat in my bed with the curtains shut and read that book cover to cover. I laughed. I most likely cried a little too. It’s difficult not to. He wrote with that classic astuteness only found within American literature, such as the likes of Richard Yates (only Post Office is considerably more vulgar than Revolutionary Road). Some chapters shocked me, while some touched me on an intimate level. I understood by the end of the book why he was considered such a colossal legend. He spoke from the heart, from a dark space which reflected not only his life, but the lives of many who had been sapped dry by the maddening routine of adult life. Even if you don’t relate, what it will do is educate you.

This book is undoubtedly very messed up, mirroring the writer itself, yet Henry Chinaski is one of the most entertaining while altogether self-destructive character I have had the pleasure to read about. Not for the faint hearted but I believe everybody should read it. If not for self-discovery, then the chuckles and smiles you will undoubtedly have over this seedy seedy little book. Additionally, Bukowski has many other notable works which feature his alter ego, such as Women, Pulp, Factotum, Ham on Rye and several others.

“In the morning it was morning and I was still alive.