After waiting for four years since the first instalment of Injustice (Gods Among Us) was released, I was lucky enough to get my hands on an early promotional copy of Injustice 2. This time there is some really cool customisation that makes the online aspect of the game and levelling up your favourite characters more rewarding and personal. The story is an epic cinematic experience with a good balance of ‘movies’ and game play, there are plenty of single player, multiplayer and online options to keep everyone satisfied and a we see the return of many fan favourites as well as some new characters to play.

There has been a serious upgrade in terms of customisation since Injustice: Gods Among Us. In the first game the most you were able to do was unlock a few complete outfits for each character with was, to put it simply, pretty underwhelming. However, with Injustice 2, as you progress through the various game play modes, you unlock unique colour schemes and pieces of clothing, armour and capes etc, for each character. The different items are assigned certain levels which is a good intensive to level up your favourite characters as each item has certain boosters from health and defence to strength and ability 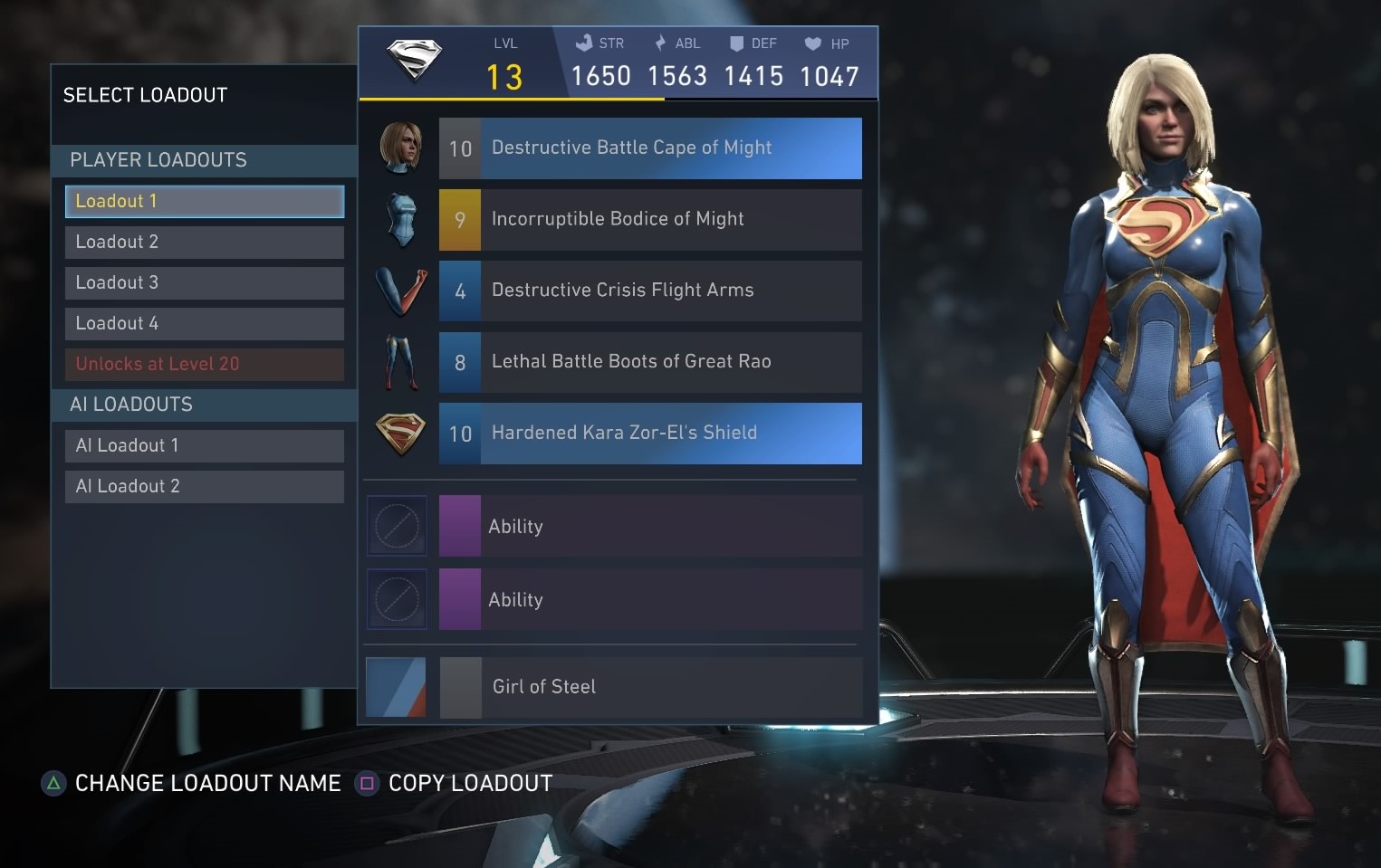 There is also another new feature in the Brother Eye Vault in the main menu. Throughout the game you will be rewarded with Mother Boxes: “Mother Boxes are fictional devices in Jack Kirby’s Fourth World setting in the DC Universe. Mother Boxes have an affinity for the Source and are believed to draw their power from it. In that sense, they can be seen as a computer that links man to God. To the New Gods, they are common appliances (used much like a PDA or smartphone on Earth), insofar as a sentient device can be called an “appliance”.

Mother Boxes are basically loot crates that you can obtain gear, abilities and colour schemes from for you characters. You can gain bronze, silver, gold, platnum and diamond boxes by doing any of the following:

The story mode in Injustice 2 is basically like watching a really good, extended movie with interactive elements to break up the scenes. The story it’s is very immersive and I enjoy the fact that Superman is one of the bad guys and you get to beat him up multiple times. You get the chance to play as almost 30 different characters throughout the story too. For a closer look at what to expect, check out the Injustice 2: Story Trailer below!

As I’ve already covered, there is the main Story Mode option, however there are severl other options perfect for all gaming styles.

If you’ve ever played a fighter game like this before (Tekkan, Mortal Kombat etc) then the game play will come easy to you. However, if you are new to this particular genre or not that confident in your skills yet you are able to choose your own difficulty setting and play through the tutorial which teaches you, not only the basics, but also combos and other more advanced moves. You are also able to choose the practice mode to perfect your different moves before moving on to playing against other players or the story mode. One thing that is really good about this game is the way you are able to play at your own speed and take as long as you need to get your moves mastered. It really is a great game for beginners and more experianced gamers alike.

There are almost 30 different playable characters in the game so I can’t really write about all of them so I have picked out my personal favorites to play as. When it comes to the guys, Aquaman, Black Adam and The Flash are my go to guys. My fighting style makes these particular characters perfect for me and really strong against other opponents. Plus, Black Adam is seriously one of the most underrated characters, he is pretty cool. Shazam!

As for female characters, there are only 7 to choose from. Still not quite enough female representation in my opinion and there was no appearnce from Hawkgirl, Killer Frost or Raven this time. However, we are treated to Black Canary in Injustice 2, who is one of my favorite characters along with Wonder Woman and Harley Quinn. The other female characters you are able to play as are Supergirl, Cheetah, Poison Ivy and Catwoman.

I have to say, whilst this isn’t usually the genre of game I play, I do have a softspot of this series (along with Tekkan) and I’m definitley going to continue to play the series as long as it is produced for us. As a kid, and still to this day, I’ve always loved comic books, so it’s great getting a game that involves so many of my favorite characters that I can play with and now even customise.

If you are a fan of the DC Universe and fighting games I think it’s a no brainer. Definitley check it out! I know for a fact the next few weeks, my life will be taken up by this game and I’m not mad about it at all.

Special thanks to thinkjam.com for supplying the review copy.

Review – Grease: It truly is electrifying