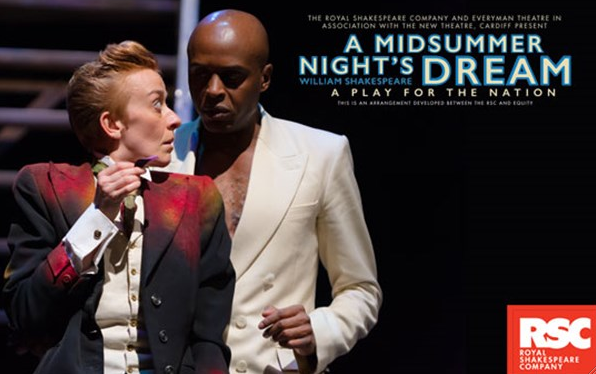 Cover photo for a A Midsummer Night’s Dream.

One would hope that students studying all the classics in school get the opportunity to see at least one of them live on stage. For me, Shakespeare’s Dream is one of his funniest texts, with much to express about love, misunderstandings and the human condition. Everyone should see it live.

This Royal Shakespeare Company (RSC) staging is alive with a snappy set, brimming with manic musicians, fragments of an aged theatre and even a grand piano bower for Queen Titania. Although the production doesn’t appear new in many ways (several costumes are stylish yet unimaginative), it does retain a charm all of its own. There were occasions when, in the lead cast, some of the lines would become mush in the whole spectacle of the show’s venture. The words are the most important part, but the trimmings of a staging should only ever complement them.

Also, huge respect for our local troupe of Everyman actors, who have collaborated with the RSC in bringing this to Cardiff. In each city to which the show tours, a local troupe of actors play The Mechanicals. Here, the Everyman lot get the lion’s share of the funniest moments in the show (Act V a highpoint). These Mechanicals are also performers, with keen eyes in staging their interpretation of the ancient tale of The Tragedy of Pyramus and Thisbe. Each one of our actors had the right type of humour, a panache that excels any “amateur” billing. 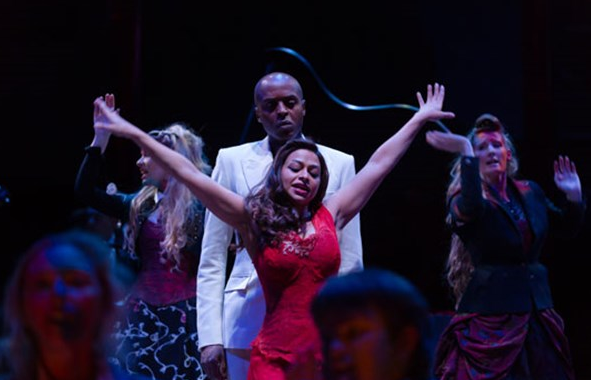 Steven Smith was a lovely Bottom, heartfelt and hilarious, and his transformation to an ass was a highlight. Philip Jones, as Snout, played with much eagerness and wit, and was in this need of a larger role. Henry Nott excelled as timid Snug, who, in his take on Lion, was determined and apologetic in these roles. He had some amusing moments in this, including his arrival as the keen beast in a costume with an absurd main and silly tail had many a titter from us.

As Starveling, Paul Fanning was a calmer sort in this merry troupe, feeble and kurt as Moon Shine. Welsh wildcard, Cari Barley was Quince, putting on a showy voice that grated after some time. Her maintaining of these divas kept laughter going, but a line of Welsh in the last act felt crowbarred in and not really required (applause justified). Lastly, Flute by Ricky Valentine had a merry time in a dress for his darling Thisbe scenes, fleshing out all sorts of over-the-top hammy moments these men of machines would often attempt.

The lead actors were mostly appealing: Ayesha Dharker was a biting Titania, putting up with no guff from her king, yet in incredulity for Bottom during her love drug influences. Lucy Ellinson was a Broadway dress Puck, the fairy trickster who attempts to sort out the humans and their love woes, only making it worse by misinterpreting which Athenian was which. She was whimsy and cunning in the role, but you feel as if it’s all been done before. Ben Goffe got one the largest laughs of the night, playing an excitable Mustardseed, who slaps the legs of another character and insults them with “Dwarf!” in a scene that he’s not even in. I wondered if they would play around with this and his stature. It was predicable but still bemusing. 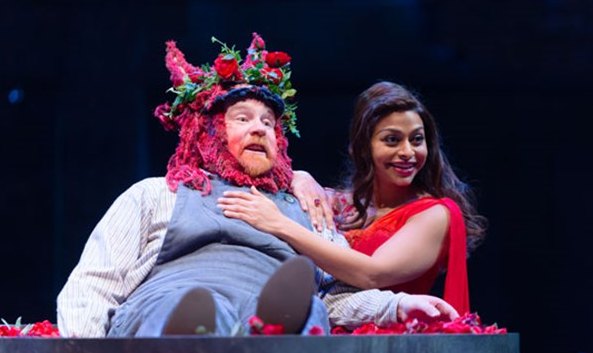 A fresh-faced Jack Holden is Lysander, a sort of naive young lad with delivery like Steven Merchant (much less Bristolian but just as dry). Chris Nayak is a factual Demetrius; these two actors displaying some great physical comedy in their fights scenes of love. Hermia was taken on by Mercy Ojelade with an attention to detail, really bringing out her words and pity from the audience. Huge praise for Laura Riseborough and her marvellous depiction of Helena. She lives the role, with an acute eye and stellar delivery, never rushing. Jokes about her height also fall well from the script.

Sam Kenyon’s score for the show chimed with a lively jazz attack and was a welcome addition to the scene changes and songs that feature in the text. The direction of both Erica Whyman and Simmon Futty should also be applauded, as well as the commitment of Everyman and the fab pupils of Rumney Primary School, all having credit-worthy roles with the RSC.

More collaborations like this can only be a good thing.

Watch the BBC’s take on A Midsummer Night’s Dream on iPlayer.

Philip Jones will star in Weeping Tudor Productions’ new video pieces as Erik Satie, part of the composer’s 150th birthday this year. To premier at Chapter Arts Centre this winter.