Ceri Dupree has carved out a name for himself in the world of drag performance. From rubbing shoulders with the late, great Danny La Rue to actually playing the man himself in the 2014 TV series Cilla, performing on cruise ships all over the world, to delighting audiences throughout the Christmas season in pantomimes year after year; Dupree has proved himself to be a giant in the industry. A couple of years ago, he celebrated his 30th year in show-biz, but since then the star has shown no signs of slowing down and now his one-man show returns to the New Theatre.

does many things well but subtle is not one of them. Stepping onstage in an outlandish concoction of diamanté and feathers, the star starts the show with a bang, giving the audience a taste of his versatile yet powerful vocal ability which remains constant throughout the evening, regardless of who he is impersonating. From Dolly Parton to Shirley Bassey, he uses his voice to tremendous effect, bringing an extra dimension to each lady. 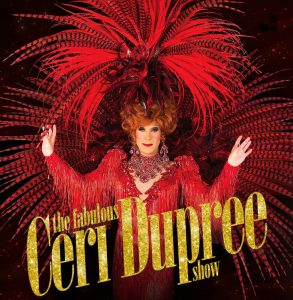 There are plenty of women he brings to life who don’t sing however, and Dupree uses this opportunity to show off his filthy and in-yer-face style of comedy and if someone dares to interrupt, well he simply uses that as an opportunity to show off his razor-sharp wit. Dupree has brought his command of the stage to a mastery over the decades and it’s a true joy to watch him play with audience, never a moment where he loses control; always aware of exactly of what he’s doing and just how this will add to the spectacle.


It can be hard for many performers to keep their shows fresh and entertaining after 30 years but this isn’t a problem that Dupree seems to have and throughout the evening, he masterfully blends the crowds’ old favourites such as Dame Edna Everage and Zsa Zsa Gabor with new additions such as Gladys Pugh (Ruth Madoc’s character from 80s TV show Hi-de-Hi!), Bjork and Joan Rivers.

Those of you who have seen one of Dupree’s shows before may recognise a couple of the jokes, but Dupree’s delivery is so on point, and the jokes so well-designed, that you can’t bring yourself to care – you’re too busy laughing. There’s also plenty of new material for you to sink your teeth into, all snappily delivered.


Dupree invests a lot in his costumes and it pays off enormously. Regardless of who he’s impersonating, the outfit is always on point; whether it’s a silver spandex cutaway surrounded by a goldfish bowl (Lady Gaga) or tight-black leather boots with chains around the chest (Cher), it’s safe to say that the woman in question is always instantly recognisable and definitely entertainingly exaggerated. At one point, Dupree walked on in a headpiece so outrageously high and feathered, it’s a surprise it stayed on throughout the original musical number.


Ceri has in recent years expressed concern over the reliability of audiences in the days of live-streaming, YouTube, 999 channels on TV and a general dependency on digital media; but from the audience at the theatre, it might seem his fear is misplaced. Almost every seat in filled, an audience ready to laugh, confident in the abilities of a veteran drag performer who has performed all over the world. Dupree combines spectacular outfits with hilarious routines and clever impersonations, culminating in a laugh-out-loud show that’s definitely NOT family-friendly.

Review: Estrons – You Say I’m Too Much, I Say You’re Not Enough