REVIEW: Escape The Scaffold @ The Other Room

Have you ever chatted to someone gorgeous at a party, and they’ve expressed a super niche and acute interest in 17th Century Russia, or estuary fishing or some other subject you know precisely zilch about? And, because they are just so beautiful, you’ve nodded, and stumbled through a confusing conversation that went way over your head just so you can look at them some more? 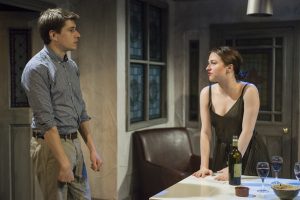 Yes? That is almost exactly what watching Escape the Scaffold is like. It’s beautiful to behold, but intense, and deeply confusing.

I can’t offer you a plot synopsis, because I’m afraid I’m a little unsure of the story, even after focus grouping with other theatre-goers in the interval. But I can tell you it’s shocking, absorbing and lightening fast. Comedic yet eerie. Pin sharp then poetic at the drop of a hat.

Otherwise? There’s some murder, a love triangle, a brief trip down the dystopian rabbit hole, crossing and double crossing and a chicken dinner. But I couldn’t really pinpoint a narrative; just beautiful scattered set pieces.

It is a testament to the skill of the three actors, and the directors and designers, that a show with no discernible storyline was so gripping. Charles Reston was a coiled spring as Marcus. Trieve Blackwood-Cambridge (with a name made for acting) was all long limbed insouciance as activist Aaron. His snaps between silliness and impassioned speeches were oddly charming. Rosie Sheehy’s Grace was an enigma wrapped in a puzzle, twitching hands and smokey eyes and glimmers of something dark under her flirty, combative surface. The dual character scenes were full of tension, all loaded pauses. Scenes with all three characters raced through speedy dialogue, rattling between arguments and in-jokes like machine gun fire.

The set merits special mention-three parts painted ply and ten parts voodoo magic. There were so many entrances, secret pockets, linked corridors, that I was left astounded as to how that actor ended up there, in a new costume, after leaving from the other side of the stage a mere ten seconds ago. Scene changes were choreographed with a balletic, dreamlike quality, that became jagged and sharp as the crescendo drew near. 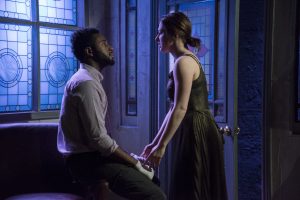 Ultimately, the failing of Escape the Scaffold is that it’s a play without a point. It’s beautiful to look at, and seems to be trying to say something, somehow, but I’m unsure what. Grand speeches by characters feel irrelevant and worn, striving but failing to land a killer blow on a social evil somewhere between armchair activism, racist politicians and the messy collision of youthful idealism against cold-hearted capitalism in the years after uni finishes.As a result, there were points where speeches meandered into the kind of self indulgence that wouldn’t be out of place on your annoying mate’s facebook wall. (If you’re annoying mate also had a creative writing degree and a love of the thesaurus)

If you want a crystal clear narrative or a story that tangibly says something – this isn’t the show for you.  But if you want to spend 2 hours looking at something gorgeous, while being pleasantly confused- you can’t go far wrong.