One leaning tower which, possibly, should have fallen down years ago. One huge sound stage, big speakers to boom out electronic acoustics. I must admit, I was a little worried that this concert might shake the foundations of Caerphilly’s finest Castle a little too much.

My fears were unfounded. In fact this may have been the most pleasant concert I have been to. Too often I find myself struggling to hear lyrics over booming music, and whilst this was the case during some of Boy Azooga’s set, by the time we got to PSB the dust had settled. 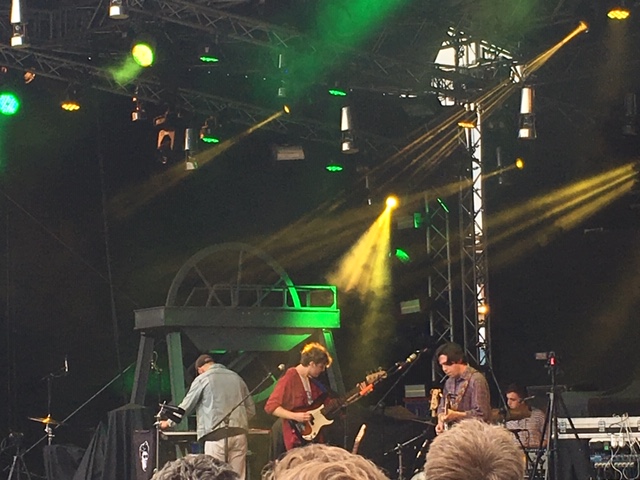 We showed up a little early, scouting for familiar faces in the crowd- which at first was quite thin but filled out quick. A young guy in a red jacket was strolling in with some mates and I said to my date for the evening- that there is Boy Azooga. I was only joking.

Imagine the look on my face when, in fact, our red jacketed chum appeared on stage half an hour later. I had pointed to the frontman of Boy Azooga, Davey Newington. 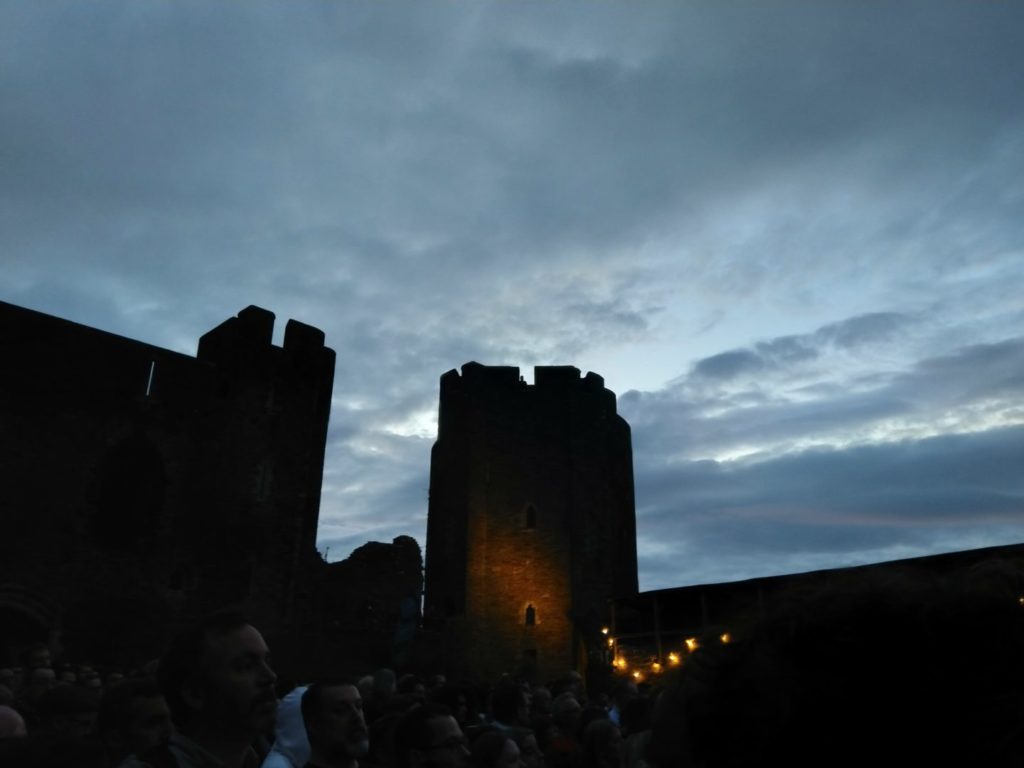 Full credit to Davey and his band – they have been keeping up a very fast paced schedule. Le Pub in Newport Friday night, followed by this concert on Saturday. We spoke to an Orchard staffer who told us they were getting a 1am Eurostar for a 9am soundcheck in Berlin on Sunday morning. G’wan the lads.

I must admit I wasn’t impressed at first with Boy Azooga. But by the time they got to “No one wants to admit that their time is running out…” I was kicked into thinking about my own life and death and that of everyone around me, like a musical Mass. After that, I was a convert, and I think the crowd were too. 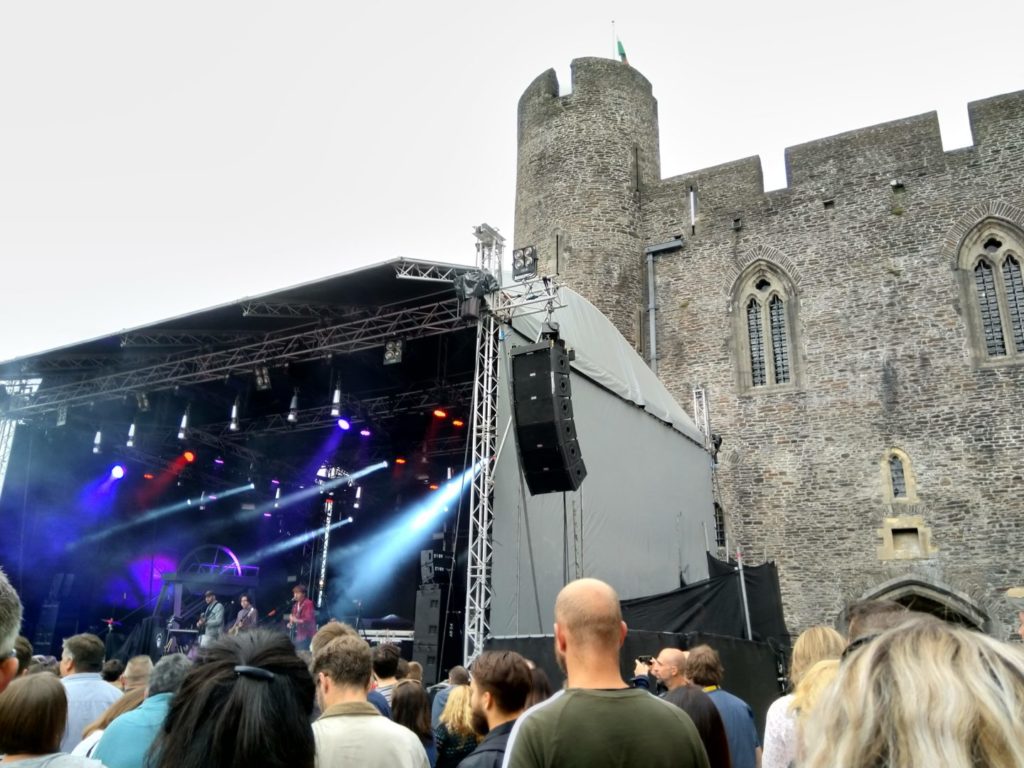 Public Service Broadcasting’s oeuvre, meanwhile, was perfect for this unusually majestic venue, a bastion of Welsh history. They focused a great deal of the Every Valley album in the show, thanking the crowd as they always do for a warm return to South Wales. (The album was recorded at our sister project, EVI- read all about it here.)

A very Sprout-relevant opening followed, with PSB playing People Will Always Need Coal as a large replica colliery wheel span at the side of the stage and miners’ lamps dropped down slowly, ominously, from the stage ceiling. This song features video and audio from a National Coal Board recruiting video, which encouraged lads as young as 15 to go into the mining industry. It seems a little strange and otherworldly by today’s standards- such is the point of PSB’s music.

“I believe in the future- it is wonderful because it stands on what has been achieved.”
-Korolev

PSB segued into some older material- Go! of course had everyone chanting and raising a pointed finger. Korolev then strikes a positive note as the graphics flashed by on the constantly-on video screen behind the band. The narrative suggested a return to Every Valley soon enough- and sure enough, they followed beautiful Korolev with “I believe, in Progress.” The whole setlist is here.

As Progress led to They Gave Me A Lamp and the feminist anthem Mother of the Village, I started to feel as if I was barely in the castle at all, as if I was looking back at all my ancestors going back generations and whether they’d be proud of what our society is like now, whether they’d be pleased with their great-great-grandchildren’s place within it.

The raucous Spitfire warmed us up for, I guessed, All Out, and I was right. All Out– an angry rock anthem with videos of clashes between policemen and striking miners- had the crowd in a frenzied state. A group of young women to my left even started a chant of “F**k Thatcher!” The lady in front of me started telling me about her life in Ponty as a young girl during the strikes and the effect they had on the community. She had even seen Arthur Scargill give a speech in person there.

The lights dimmed for Welsh-spoken-word You And Me, with a female singer joining the band and all their electronic arsenal. I’d say a few tears arrived in the crowd as night had fallen after the electrifying energy of All Out had dissipated. What a show! But they weren’t done yet!

A Welsh flag came out on stage- and PSB’s leading man is in a Welsh footy shirt, which the crowd adored. And then out come the spacesuits! I knew there was something missing from the Newport concert last year and this was it- the dancing Cosmonauts. Out came the trumpets, blasting out a beautiful rendition of Calon Lan, just because they could. Welsh patriotism levels now outranking that of the Grand Slam 2019 winning team, the crowd started an oggy oggy chant. Frontman J. Willgoose broke it up in his posh London accent: “We’re going to be here all night, aren’t we.” 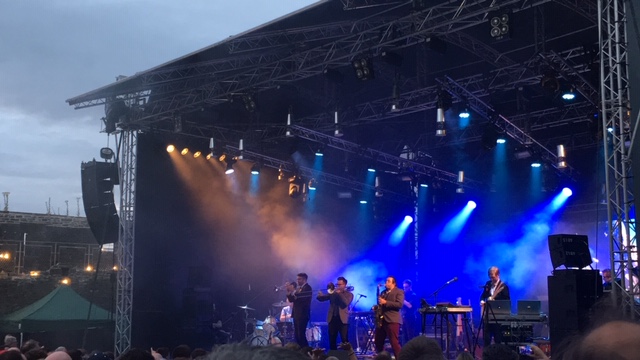 Whispers had been building throughout the crowd, but the band finally confirmed it. They left the stage for the final time to be replaced by Ebbw Vale’s Beaufort Male Voice Choir. They were of course here to sing Take Me Home, and you bet I sang along too, as did most people. But the crowd bayed for more as curfew went by the wayside. We got the national anthem out of them, and people started shouting for Max Boyce’s Hymns and Arias (the real national anthem, obviously). But all good things must come to an end.

Orchard will be holding more concerts in Caerphilly Castle soon, as these were such a success. Keep an eye out on their website.

One Week On: UK Elections Results & What They Mean For Us