Disability is rarely spoken of, therefore imagine the climate in the 1960s. With it’s hugely varied opinions and viewpoints; though civil rights we’re rampant at this time for people of race, LGBT and other minorities, who really put the disabled voice across back then?

A Day in the Death of Joe Egg by Peter Nichols, was almost the play that never was. Had its original run in Glasgow not gotten to print in the English version of the Guardian, we may never have known of it. Thankfully some Scottish reviews were full of praise, making it a vital piece of British theatre, concerning disability and being a carer.

Brian and Sheila care everyday for their daughter Joe, who has cerebral palsy. To escape the suffering of their situation, they address the audience with great meta delight. Telling us of the things that could have happened, they highlight the catalogue of incompetent medical services seen at the time. So much is thrust upon Joe: the expectation that she will overcome her condition, the fantasies in which her parents, in many respects, use against her and the belief that she can do more than it appears. It’s full of teary moments; especially when you feel this could be any parent today going through the same thing, only they don’t have an audience to deliver their stories. Nichols is never afraid to shy away from an uncomfortable moment or create tension that can be involved with disability; and it’s relationships with families.

In the perfect role, Brian Smith is his namesake, a flippant, witty teacher (his monologue at the start is convincingly real), who jokes about his plight and is the definition of passive aggressive. Brian’s merry nature flickers into play when his imagination and memory mingle to stage his own account of what went down when Joe was born. Lorna Pritchard is Sheila, an intense role as Joe’s main carer. Although her telling of events may alter slightly, her account may be more favourable. Lorna tackles the role with a mighty enthusiasm and it works wonders. Both leads pull this off very well.

Abbie Leigh-Edwards as Joe, has a lot demanded of her. She must maintain the effects of the condition in her character without any respite. Everytime she was on stage, it respectfully felt as if she had the condition, such was her authenticity. Supporting actors were mixed. 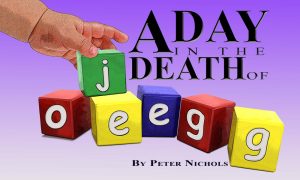 Helen Power as Brian’s mother, Grace: the west country, friendly sort who only loses it when she bickers with Sheila. As Freddie, Darren Freebury-Jones must not force a posh accent so much as it affects his true delivery of the lines. His partner Pam, here played by Elin Haf Edwards is a character role which does have an important reveal: most characters are honoured with their own monologues and Pam’s is perhaps the most shocking of its time. Her lack of sympathy and her bone idle remarks on the disabled, would leave, in today’s standards, anyone absolutely fuming.

The first part of the show is the truest form of the work. It’s simply the parents and Joe; this works well enough on its own without the addition of the mostly uninteresting characters. The only real note worth highlighting in the second part of the show are Brian’s frenzied attempt to kill Joe by leaving her in the freezing car and his departure, leaving both Joe and Sheila to fend for themselves. It’s a pretty awful ending, leaving the audience muddled over which character was the worst off.

The play still has so much to offer us about disability, giving a voice to those who love and care for those affected.

Everyman Theatre’s next large scale show is The Romans in Britain by Howard Brenton, at Chapter Arts Centre 28th February to 4th March 2017.

An extended performance of Satie’s Vexations take place around Cardiff starting in October till new year, as a fundraiser for OCD UK, with such venues as the Wales Millennium Centre, St. Edward’s Church (of Cardiff), the Cardiff Masonic Lodge and the YMCA as locations. We also need more musicians, venues, rap artists and artists in all fields to help to complete the piece. Follow #CardiffVexations on social media to see more!