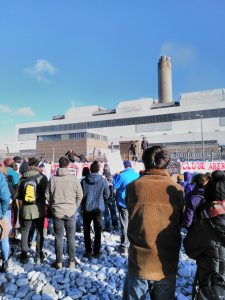 I never thought that something could be slowly draining our lives away right under our noses, that is, until I found out about Aberthaw power station…

Last weekend I attended a protest against Wales’ largest coal-fired power station; along with over 150 people coming from London, Bristol and Cardiff, people who belonged to groups such as the United Valleys Action group, Reclaim the Power, Bristol Rising Tide and the Coal Action group.

The protest consisted of two sections; the first being a gathering on a nearby beach while various people explained what the problem was and what could be a solution, Then secondly there was a march around the perimeter of the power station. This ended in another empowering speech full of shocking facts and a conclusion to the event.

The reasons for the protest at Aberthaw are almost endless and shocking;  in short – it is killing us! Statistics show that the power station emits five times the amount of pollution into the atmosphere than the law allows, making it illegal. The pollution from Aberthaw can cause lung problems such as asthma and can lead to premature deaths. It’s emissions kill 400  people each year and doesn’t just affect Wales; it has an effect on much of south England and Europe too! It is calculated to cost 35000 days of lost work a year in total. So why hasn’t it been closed down ? 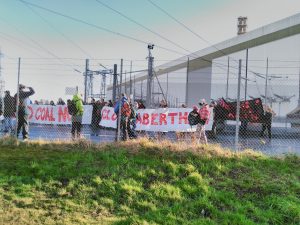 The most appalling fact is that the Welsh Government is aware of the dangers but is not doing anything about it. Aberthaw is not once listed in 3 plans for achievement of EU air quality and the Welsh government has failed to monitor spikes in emissions.

To give a picture of just how bad Aberthaw is, Aberthaw ranks 70 out of 14326 worse polluters in Europe. It emits so much pollution that closing it would be the equivalent of removing every vehicle off the roads of Newport and Cardiff ! It is the third largest point source of toxic nitrogen oxides in Europe. Advocate General Michael Bobek of European court of justice described Aberthaw’ sky-high pollution levels as ‘untenable’. Not only does Aberthaw emit extreme amounts of nitrogen dioxide but it is also one of the UK’s biggest emitters of mercury, 0.6% of the UK’s total emissions. 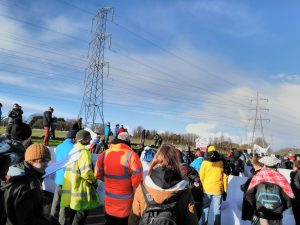 I feel this is an extremely important matter and I encourage you to read the very informative report about Aberthaw on the Friends of the earth website.

Of course we need power but the Welsh government have let the people of the Vale down, gambling our health against a misguided obsession with keeping an outdated legacy fuel going.

Fossil fuels may seem like the easiest and most efficient way to create power, however, making Aberthaw a green energy plant would provide a lot more jobs and be more healthy for the planet. At this point in time, green energy is not a choice, it is a necessity in order to keep living on the planet. Close to the start of the industrial revolution, water mills were used to create steam to power machines, this was sustainable and worked well; perhaps water could again be used to produce more electricity; that’s why projects like the Swansea Bay barrage are so important for the future.

For the sake of all our health, surely Aberthaw must be closed immediately.