No Man’s Land is, hands down, the biggest stage event to come to Cardiff in 2016.

I was not well acquainted with Harold Pinter’s work before turning up to No Man’s Land. I sat myself down with expectations higher than I thought possible, not only from the play overall but also from the acting itself. With British legends, Sirs Ian McKellen and Patrick Stewart, in addition to Owen Teale and Damien Molony, it became obvious that this performance would be of quite a heightened calibre. The notorious duo, known for their outstanding performances on both screen and stage, had the leading roles, so of course I expected a stellar performance. And it was.

Act One began slowly yet grew more and more enjoyable as each glass of brandy was chugged by the characters of Spooner and Hirst. Glass after glass, their tales and conversation became more and more amusing to the audience (as they became more and more intoxicated). The transition from sober to drunk in terms of body language was swift, with the humour of the moment captured perfectly by its eloquent interpretation by McKellen and Stewart. 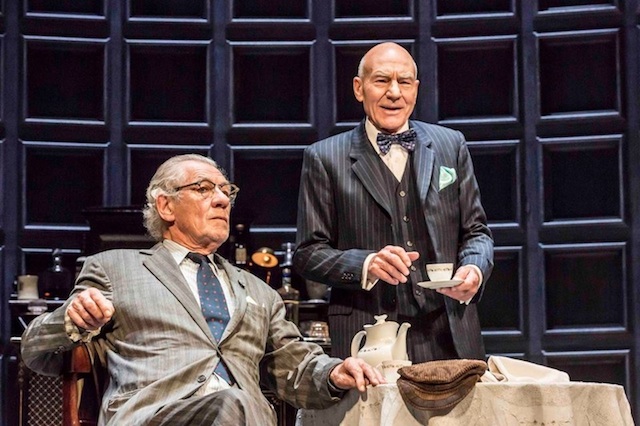 “To your good health”

The play itself is wonderfully written, with profanity used with utmost effect and smutty jokes just subtle enough to raise chuckles but not so much as to shock the audience. Wordplay and long winding roads of sentences were common, showing a glimpse of the ramblings of two old men who appear very different at first sight. Briggs and Foster themselves are characters who deserve their own play just as Rosencrantz and Guildenstern were awarded themselves. One is aggressive and quick-tempered, while Foster plays a young devoted assistant of sorts, proud to service a man such as Hirst.

“I’m beginning to believe you are a scoundrel”

The set was beautiful yet simplistic, with the outside world just lightly peeking through the top, swinging trees and rain adding that touch of extra quality to the show. Costumes were time-appropriate, as I would have imagined; not elaborate yet in keeping with the vibes.

As the play progressed, the acting shone brighter as the themes became dimmer. Spooner and Hirst, who had met in a pub in Hamstead, apparently strangers, realised by the next morning that they were acquainted years ago in university. By Act Two, it was no longer Spooner who spoke in long arduous paragraphs, constantly asking if Hirst was often at Hampstead Heath. The ending focussed on Hirst, providing a sad realisation as it became clear that he may not be as sound of mind as first thought.

The final minutes are calm, collected and slightly surreal.

To which Hirst replied, “I’ll drink to that!”