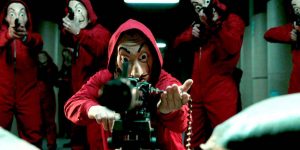 When I started The Money Heist (La casa de Papel), a netflix spanish series, I never thought I would get to the end of the series. Instead, four days later, after a huge binge watching, there were no episodes left. I have to thank only the extreme entertainment of the series, the only point on its favor. Talking about the other aspects, unfortunately it is faulty of a non-existent likelihood and consistency within the plot, often at the edge of the absurd. 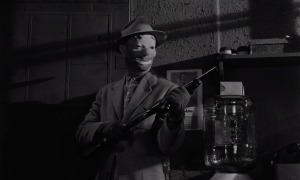 The plot focuses on a robbery at the Madrid State Mint, with the aim of stealing 2400 millions of euros. An infallible plan of which every cause and effect have been studied in detail by the Professor and then by the eight robbers he recruited. Nobody with his real name, just like Tarantino docet, and all with masks, in this case of Salvador Dali, like all the best robbery films.

The series is in fact a game of quotes, as well as obvious metaphors of the narrator of one of the robbers (Tokyo), not to mention a veiled appeal to feminism. And then the fiction. There are more love stories in the time lapse of the robbery than in a canonical Telenovela. Let’s see below what made me say the most: BUT ARE YOU SERIOUS?

Let’s start with two robbers: Tokyo and Rio. Clearly, within an infallible plan there will be guidelines, let’s call them “rules”. These are broken by the two even before implementing the plan. Locked up for six months in an estate near Toledo, to prepare themselves at their best, they had a basic rule: no personal affairs. Being a job, and a robbery of millions and millions of euros, one can understand how the professor did not want futile human feelings to interfere with his perfect plan. Two seconds were enough for Tokyo and Rìo to disobey and fall madly in love, getting at a marriage proposal just the day before the coup. With her refusal, the tension the following day is assured and so goodbye to professionalism.

Not only the thiefs but also the hostages have left me a bit incredulous. Arturito is the leader of the latter. If with the word leader we mean the one who believes himself the hero, who constantly takes the worst possible decisions (tries to stab a robber with rounded-tipped scissors), and because of this he does nothing but make life inside the Mint even more hard than it already is. Arturito, married with children, has an extramarital affair with another hostage, Mònica, who just that morning, before the robbery, had announced she was pregnant. Image of the light of reason, begins her role as an hostage with a bang. After delivering all the phones, deciding to be more clever than the others, she takes a spare phone that Arturo had left in his jacket, being discovered five minutes later by Berlin, the captain of the robbers, earning a death sentence. Fortunately, the hangman of the situation is Denver, one of the robbers team, the best and most reasonable, at least until he meets Mònica and saves her from certain death, hiding her in a Mint vault. Meanwhile, the bad reaction of Arturo to the news of the baby on the way, had convinced Mònica to want to abort. It takes two minutes for Denver to change her mind. Everyone would listen to a criminal, right? Obviously, a love is born between the two, so that Mònica passes to the “dark” side. 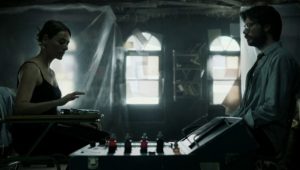 Raquel with the Professor and the truth test

The podium goes to the Professor, undoubtedly. Part of the plan is to approach the Inspector Raquel Murillo, in order to better predict all the police moves. But going forward, a flaw is inevitable. The professor, dictator of the rule “personal relationships are not allowed”, falls in love with her, so much so as to plan a life after the robbery in some beatutiful island. Continuing to lead a double life, a bit like in Breaking Bad, between that of the professor and that of Salva, the man who stole the heart of Inspector Raquel. Clearly, she eventually discovers his identity and instead of arresting him, begins to doubt which the bad and the good guys are, deciding to protect the professor.

I recommend this TV series to everyone, especially if you have time to waste and no longer have TV series to watch. The episodes spin fast and the entertainment is a lot, and the absurdities of the plot can be seen as an inevitable ingredient for the enjoyment of the series.