With Mass Effect: Andromeda, comes BioWare’s latest offering. The action role-playing/third person shooter, is the fourth instalment of the Mass Effect game series and is available on PlayStation 4, Xbox One and Microsoft Windows now.

I think it’s important to point out that while I have played many RPG’s in the past and I am a huge fan of BioWare’s other big game series, Dragon Age, this is actually the first Mass Effect game I have played.

The customisation in ME:A is one of my favourite parts as it is with most RPG’s. One thing I really enjoy is just how in depth it is, even allowing you to customise your twin. As a female myself, I always prefer to play as a female if it’s an option (not bitter about the lack of representation of females in video games or over sexualisation *cough* Lara Croft *cough* from when I was a child). Depending whether you choose to play as a male or female then determines the sex of your twin. As I chose to play as a female I was given a male twin (this comes into play during the story too).

With each new game with customisation features, they seem to get more and more in depth. As with most games like this, you can choose skin colour, hair style and colour, facial features and eye colour along with make-up and even tattoos. One thing I was a little annoyed about is we STILL don’t have the option to customise body shape, size and height. This seems to be a common theme with BioWare’s games as this feature was missing from their latest instalment from the Dragon Age game series too.

I want to say that the customisation options for your character’s face make up for the fact we have no body options yet but I don’t think it quite cuts it, however, it certainly remains one of my favourite character customisations. I was also very happy with the colour dying options so I could give my character her signature purple eyes (I do this with every character I create if possible).

When creating my twin brother, I decided to also give him purple eyes and was very pleasantly surprised when I met my ‘father’ in the game that they took components of each twin to create him which in turn, gave him brilliant purple eyes just like his children.

I love my character!

As I had never played the series before I was expecting to be able to have to option of playing as various alien races, however, you are only able to play as a human in ME:A. I was very disappointed to learn this as another one of my favourite parts of playing RPG’s with customisation options is looking through all of the different races and deciding which to play as (shout out to all the elves out there!).

Overall, whilst there are certainly some issues with the customisation and it’s not as in depth as some other games I play, it’s still very customisable and has some really fun options to choose from to make your character as unique as you want.

As I’ve already touched on the story I won’t go to deep into it. Once you have played through the epilogue you are tasked with becoming the new Pathfinder and it is you job to guide your crew and ship on an adventure across this new galaxy to find suitable places to settle and build new colonisations for the species from the Milky Way and discover exactly what remnant technology is capable of whilst trying to defend yourself from a vicious race of aliens who are intent on extinguishing all life from Andromeda. Watch the trailer below for a little taste of what to expect.

One of my favourite parts of any RPG are the side quests. So many of them get missed by players and it adds to the uniqueness of the game play. You get to learn more about the world you are inhabiting during the story, build strong bonds with your crew and friends and help out the little people. From collecting random things out in the harsh environments of foreign planets, to helping set up a movie night for your crew on your ship, side quests cover everything the main story doesn’t.

The gameplay in ME:A is both very familiar and very unfamiliar to me. As I stated previously, I’m a big fan of BioWare’s other very successful game series, Dragon Age, which implements a lot of very similar mechanics however, parts of it are very different. As I’ve played the Dragon Age games for years I’m very accustomed to that particular style of gameplay so it wasn’t too difficult to pick it up in ME:A, however, some things were very confusing and complicated to me and it just found it very hard to get into.

As a big part of the game is basically a third person shooter, I found this part particularly hard at times as I usually play DPS rogues or healers with dual wield or either a bow and arrow or staff. Being forced to play in third person and using guns, I found this part hard to get along with. There are melee options and biotech to choose from but again, I found the mechanics behind these rather clunky and hard to use and although I’m not big on shooter games, I found myself exclusively using guns throughout the game. Luckily, however, I chose to play the game as casual during my first play through so I could focus more on the story rather than combat so I didn’t run into any particularly difficult situations.

I think over all, if you are a fan of the series and have experience playing RPG’s and shooters, the game play will pretty much come naturally to you as long as you’re not a fussy gamer like me. 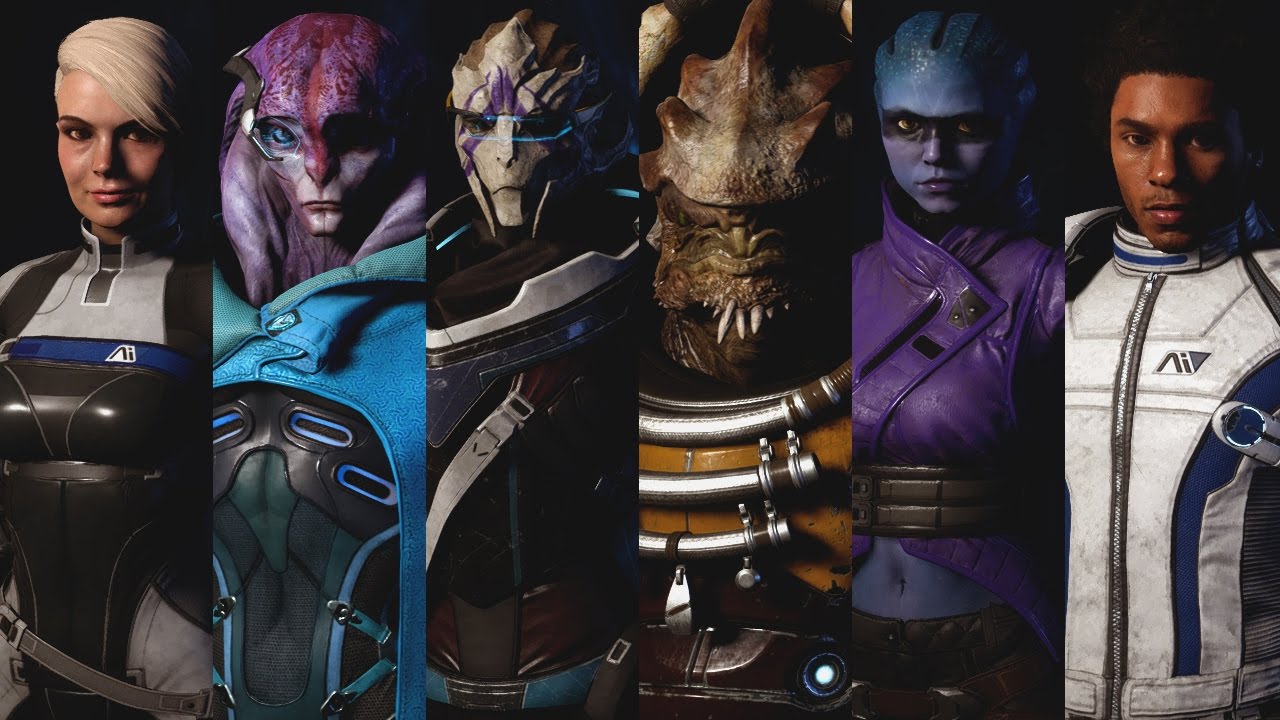 One thing I ALWAYS look forward to with BioWare’s games are the characters and the relationships and romances you can build with them. With each new game we seem to be getting more and more options for dialogue, loyalty missions and who we can choose and a romantic partner.

While both Dragon Age and Mass Effect offer options for everyone, regardless of sexual orientation, I can’t help but notice it geared a lot more towards straight men. I’m happy that, as a lesbian, there are options for me in both games, but they seem a lot more limited and not as varied in character types. We were basically given the same options for both games. In Dragon Age: Inquisition, we have Josephine and Sera and in ME:A Suvi is the new Josephine and PeeBee is the new Sera, having very similar characteristics and attitudes towards things. As I had romanced Sera in DA:I it was unintentionally inevitable that I ended up romancing PeeBee in ME:A, however, I must admit, I’m very happy with how the romance panned out and look forward to future DLC to see if any new options are available like in DA:I.

Yes, you can get ‘busy’ in zero gravity with your alien girlfriend…

I think, overall this game is really good and definitely worth the wait as many people sat in anticipation for the release for months in the lead up to it. My personal preference will always be fantasy MMORPG’s/RPG’s (with the acceptation of the Fallout series), however, I may have been slightly converted by this game and will certainly be buying the next instalment when it comes out. As with most games, especially ones with a big following, there are some very noticeable issues with it but at the end of the day, the story and the charm of flying across a new galaxy in your own space ship kind of outweighs the issues.
Whether you play games for the storyline, combat or anything in between, if you like RPG’s, then I can honestly recommend this game.

New play “Cracked” shows a side of school you rarely see