Politics and voting can be complicated, especially for first-timers. There is so much to think about, so let us break it down.

Here is what each party has said about Brexit and what it means.

If the conservatives get elected, they have proposed that we leave the EU with the current deal that has not yet been approved.

The current deal is understood as:

There will not be a ‘hard border’ between Northern Ireland and the Republic of Ireland. This means that British and Irish citizens will be free to cross the border without any passport controls.

The whole of the UK will leave the EU customs union (the UK will be able to strike deals with other countries in the future.) This would mean mandatory customs checks for every lorry between the UK and EU until a free trade deal is struck. This means that goods that have been imported will need to have further customs checks and could cost more.

Legally, there will be a customs border between Northern Ireland and the Republic of Ireland, but things won’t be checked. Physical checks will only be required on a small proportion of trade and most of the checks would be able to be done at the traders’ premises.

Things will be checked on the border between Great Britain and Ireland. 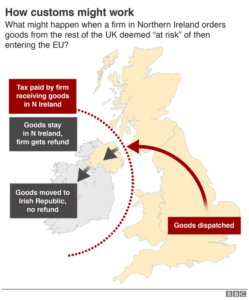 No one is entirely sure what the deal is, as the minor details have not yet been released. This makes Labour’s proposal a difficult one to understand, as we don’t know what the current deal is, how do we know we would want a new one.

They want to renegotiate Johnson’s deal and then put it to another public vote. Leave or remain.

If the result of that vote is to leave, Labour said they will negotiate for the UK to remain in an EU customs union, and retain a single market relationship. This would mean the free movement of goods in and out of the EU. This would also allow the UK to continue trading with the EU without checks but would prevent it from striking its own trade deals with other countries.

Corbyn has pledged to ‘carry out whatever the people decide’ from the public vote.

SNP are Pro-remain, they want the UK to stay a member of the EU and make Scotland independent while staying in the EU. Plaid and Green Party both want to remain in the EU and will have another referendum if they are elected.

Marley says go out and vote in the #GeneralElection2019 . Be like Marley. #dogsatpollingstations pic.twitter.com/Jl9jOVWf0e

The Liberal Democrats are campaigning for a ‘Cancel Brexit’ and are in favour of staying in the EU. If they are elected, they have said that they will revoke article 50, which is the law that ensures the UK leaves the EU.

“We believe that Britain is better off in the EU. That’s why we are fighting to stop Brexit.”

No one is entirely sure what will happen if we leave, but there are parties that want to do it and parties that want to stop it. It’s up to you how you vote, however, it’s important to remember that this election is about more than just Brexit, come back every day to find out what each party is saying about transport, healthcare, tax and more.

FILM REVIEWS: ONE CUT OF THE DEAD & MAKE ME UP