At first, it seems as though the entire film will take the form of an unofficial and tame remake of Casablanca with Pitt and Cotillard trying to remake themselves as more colourful and passionate versions of Bogart and Bergman in wartime French Morocco. There have been many who have commented upon this in a negative way.From it’s opening shot of a blistering sun-rise across a Sahara landscape, the World War Two spy thriller that is Allied, stars Brad Pitt in the role of a Canadian S.O.E officer and RAF flier, Max Vatan. Vatan arrives in French Morocco to meet up with his resistance wife and fellow agent Marianne Beausejour played by the unassailable Marion Cotillard.

I myself have a more open-mind about this. Allied for all it’s shortcomings is what it is. A sometimes cliched love-story set against the backdrop of one of the most brutal struggles in the history of warfare. So in some instances the case might be made that this is a very romantic and inaccurate portrayal of what it was like to be a resistance agent during the Second World War. 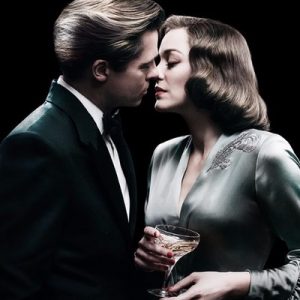 But in this case that is quite the opposite. The agents depicted in this film and the people who run them, whilst being shown to be emotionally fallible at times, are shown to be absolutely without mercy and totally ruthless in their dealings with the enemy.

Aesthetically speaking the film is incredibly accurate with the streets of London decorated with broken shards of glass, shop-windows littered with “Open As Usual” signs and “The Enemy is always listening” posters adorning the walls of Ministry hallways.

In summary whilst Allied might not win any Oscars or became a cult classic, that doesn’t mean that it isn’t a very fine film. Well written, well directed and well-acted by its principal cast members Pitt and Cotillard.

And while it is slightly cliched here and there in terms of its plot Allied is an exemplary spy thriller and much like the previous war films that have come out in recent years, like Fury (also starring Brad Pitt), Anthropoid and the upcoming Hacksaw Ridge, it continues the magnificent trend of work and painstaking research that directors and producers the world over show when making World War II films.