Maybe I have a messed up sense of humour, maybe I just have one to many problems or maybe I’m just a little bit of a psychopath. Either way I absolutely loved Through Looking Glass in all it’s weird glory!

Be warned, this is not a show you should see if you are of a nervous disposition or offend easily. 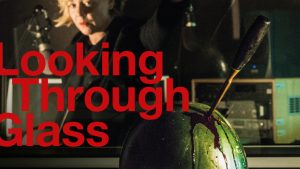 Source The Other Room

Originally I just wanted to write “You have to go and watch this messed up, twisted, bizarre show. I have no words. Just watch it. It is perfectly messed up.” however, I don’t think my editor would appreciate that. So… after wrapping my head around what I had watched, I found some words!

I usually really hate audience participation, with the exception of Rocky Horror (See my review here) but I loved the fact the whole audience was part of the play. We were all interns for a radio play, constantly being demanded to wave to activate light sensors, a couple of guys were asked to help out at the beginning and asked back in the booth to help with some sound effects. The actors came into the audience a few times, interacting with us. It really made you feel like you were part of the world François Pandolfo created.

Each actor was brilliant in their own very different ways. The first thing I noticed when I walked into the room was François Pandolfo standing inside of a glass box, dancing extremely suggestively, occasionally thrusting at the audience. I feel like it made some people slightly uncomfortable but I thrived off of the awkward energy some of the audience were giving off. The more provocative a performance, the better in my opinion.

Eiry Hughes played a wheelchair user and her comic timing was spot on. Of all the actors, she made me laugh the most, absolutely brilliant.

Robert Bowman played a fabulous gay man with wonderful taste in Christmas jumpers! A hilarious actor who had the audience laughing throughout the performance.

Nicola Reynolds played my favourite character – Alison Tittenson. I’ve worked in media in the past and she portrayed a scarily accurate producer/director. She commanded the audience perfectly and her outfit was on point.

With the room being plunged into darkness a few times and some jarring noises and visuals popping up it certainly unnerved a few people. Whilst not all of the humour was relatable or understandable, there were still some moments that were very funny and very weird. There was one amazing moment when the cast started doing a dance routine which may possibly be one of the most bizarre things I’ve seen live.

I only noticed a couple of mistakes during the performance but they were so small it’s very unlikely your average audience member would notice as the actors stayed professional and in character throughout, carrying on seamlessly.

Overall, the play was really good. I can honestly recommend it if you are a fan of things not quite mainstream and a little bit twisted. I wish there were more live shows like Looking Through Glass and I would really enjoy going back to watch it all again. I’m definitely going to be keeping a look-out for anything François Pandolfo writes or any of the actors appear in, in the future.