With the remake of Stephen King’s IT, set to be released in theatres on the 8th of September this year, we’ve just been treated to a first look. I decided to watch the official teaser trailer again and share the new video with you guys, gals and non binary pals! 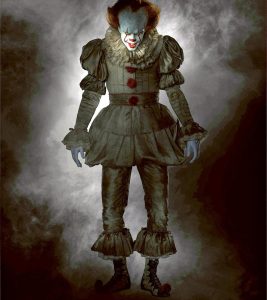 So, without further ado, here’s the official teaser trailer!

While I was never a massive fan of the original film as a kid because I actually found it a little boring and not that scary, I have to say, in comparison to the remake, the original is actually looking a lot better than I remember it to be. Each year, I seem to be getting increasingly bored and frustrated with the horror genre. When I as younger I devoured all the classics from the 80s and 90s and even a few from the early 2000s. However, the offerings we’ve had in recent years just don’t seem to reach the same bar. Maybe we have been desensitised so much that we just don’t find things as scary as we once did. Or maybe we’re just seeing the same stories being churned out again and again disguised with a new characters and settings?

As a fan of classic cinema, I’m always eager to see remakes or spin-offs so I will, of course, be seeing IT in September. As excited as I am, I know I’ll be entering the cinema with dread in my stomach as I wonder in what ways they have ruined a classic, although, I’d love to be proven wrong and end up enjoying the film.

For a closer look at the upcoming film, check out the brand new first look!

What do you think of the trailer and first look? Will you be going to see IT? Are you looking forward to it or annoyed that another classic is being remade? Let us know in the comments!

All images have been sourced from imdb.