Now that the new Harry Potter story, Cursed Child, has been released in script format for us poorer and non London dwelling folk to consume, I’ve had some time to digest it. 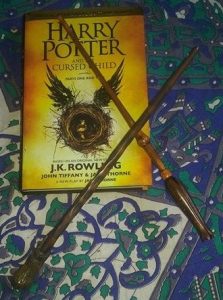 Being a Harry Potter story that’s technically canon, I want to like it, I want to give it a good rating. But I can’t. I feel like I’ve read a story that an over excited 12 year old wrote for English class. Although it was part created by JK, it doesn’t have the same vibe compared to the original books and films. Maybe that’s because it was written to be a play? Maybe I need to see the play in order to give it a fair review? But I still cannot see this as canon.

The good, the bad and the… 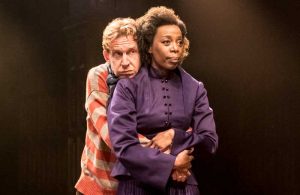 Of course there were some good parts. Ron and Hermione’s relationship is just as soppy and funny as you’d expect it to be. Rose, their daughter, is every bit her mother AND father. She seems to have inherited their best qualities and I wish we had seen more of her. (don’t get me started on the lack of the other kids, Hugo, Teddy, Victorie, Fred II…?). Scorpius became the comic relief I never expected him to be and showed us that, regardless of who your father is, you don’t have to be that same man. Again, I enjoyed the way he was written, making these ‘new’ characters rather likable.

Primarily, being a play, it’s understandable why so many characters were not written in (Shout out to Luna and Neville! What about the rest of the Weasley clan?) but perhaps they could have been referenced? Only giving us a glimpse of Neville’s future when Ginny asks Albus to ‘send their love’ to him at Hogwarts, we already know he is herbology Professor, what about everyone else from Dumbledore’s Army? 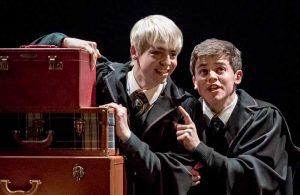 Having last seen Albus on platform 9 1/3 at the end of Deathly Hallows we see him feeling concerned he will be sorted into Slytherin, with Harry reassuring him that it makes no difference where he ends up and that he was named for two headmasters, one a Gryffindor and the other a Slytherin. He meets Scorpius on the Hogwarts Express much like his father met Ron (and then proceeded to bond over sweets) and after they were both sorted into Slytherin they became inseparable best friends.

Their friendship is full of positive aspects with the young men being there for each other throughout family issues and troubling times. However, you get a sense of negativity in the way of  manipulation as well as Albus coming across as a bit of a narcissist. Albus can be seen to take advantage of Scorpius’ good nature and naivety, however they do seem to be back on even footing by the end of the story.

One of the, what I like to think of as ‘WTF moments’ that happened in the story is perhaps the most important plot point. Voldemort had a daughter. With Bellatrix. Can anyone actually imagine Voldemort and Bellatrix having a kid together? I mean, personally, I think I’d rather read a story about Voldemort rasing a child than Harry’s troubled kid, “What do you mean you called the rabbit I gave you Fluffy!? I gave it to you to practise the cruciatus curse! Go to your room! And no chocolate frogs for a week!” Ah, domestic life at the Riddle’s. What a dream. 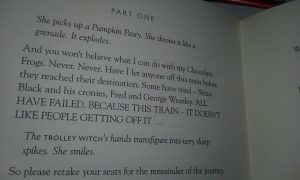 Another slightly WTF moment was the trolley witch. The sweet, kind, old lady helping give children cavities from the moment the Hogwarts Express first came to be 190 years ago. The troubling part? The Trolley Witch is on the roof of the Hogwarts Express when she delivers these lines to Albus and Scorpius. “These hands have made over six million Pumpkin Pasties. I’ve got quite good at them. But what people haven’t noticed about my Pumpkin Pasties is how easily they transform into something else…” (See photo to right)

I mean, what kind of magic is that? Her hands transfigure into sharp spikes? Ok, JK, ok. Seems legit 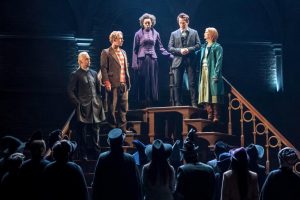 Throughout the books and films of the original stories, the characters pretty much stay true to themselves. That is, with the exception of Harry going slightly off the deep end in Order of the Phoenix when he thinks the world is out to get him. So, it’s very hard to read Harry, Ron, Hermione, Ginny and Draco as the characters we grew up with. When I was reading their lines I read them as new characters because they just did not sound like kids from the original books. At all. Yes, I know that they are all grown up now, have their own kids and have been through new troubles. But you’d think they would retain some of what made them who they were. They really do read like different characters. 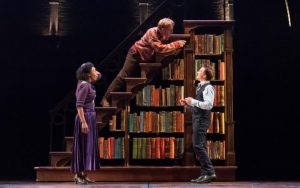 At one point in the story Harry turns around and tells Albus that sometimes he wishes he was not his son. Ok, we have seen Harry be a moody, impulsive person in the past but I don’t think young Harry would ever want his future self to behave in such a way.

Ron has basically become a sidekick in this story and pretty much has the personality of a wet lettuce leaf most of the time. He seems to have taken the roles of Fred and George, becoming obsessed with Jokes and pranks but not with as much ‘oompf’ as the Twins. Hermione on the other hand, has become the Minister for Magic and seems a lot more stern, strict and just not as fun as she once was.

Ginny doesn’t really bring much to the table, just like in the movies (Book Ginny FTW). Mostly she is there for Harry to vent about his dreams and problems. We don’t get to see her be her own woman like we once did. Draco, has become a lot more withdrawn. Although, his wife is very ill and does eventually pass away over the course of the story, so he has his reasons. But again, he just doesn’t seem like the young man we once knew, no part of his personality seems present anymore.

Obviously, as I said before, they have all grown up. But to not have any of your more prominent traits is worrying. You would have thought they’d become happier, and more carefree, with Voldemort gone and no longer oppressing them. Maybe they have just succumbed to the stresses of adult life in the wizarding world ? Forgotten that life can be a lot worse?

If you read this as a comedy then it’s a good read. If you take it seriously as a Harry Potter story then it’s a let down. I think JK Rowling had a good thing going with the 7 books and Pottermore, it’s all we needed. Creating more stories like a whole play or book is not good for the fandom or the magical world she created. But that’s just my opinion! What do you think? Canon or not? Did it feel like a Harry Potter story? Will it change the way you will read the original books? Let us know in the comments!

Images writer’s own or from the official Harry Potter and the Cursed Child Facebook page.

It’s free and quick to comment below, but we recommend signing up with your email or as a guest to keep usernames Sprouty and anonymous (and never post personal details!).

Why the Millennium Walkway Graffiti Wall Should be Kept Up

Rapper Ray Tee gets the gold at Cardiff’s Got Talent