In a few days, a new independent British film Burning Men will be screening in cinemas around the UK.

BURNING MEN is an original mix of road movie, buddy movie and psychological thriller. It is also a story of relationship dilemmas as Ray finds himself torn between his best friend Don, and fellow traveller Susie. It’s both a fun and often unsettling adventure, full of colourful characters and packed with great music. 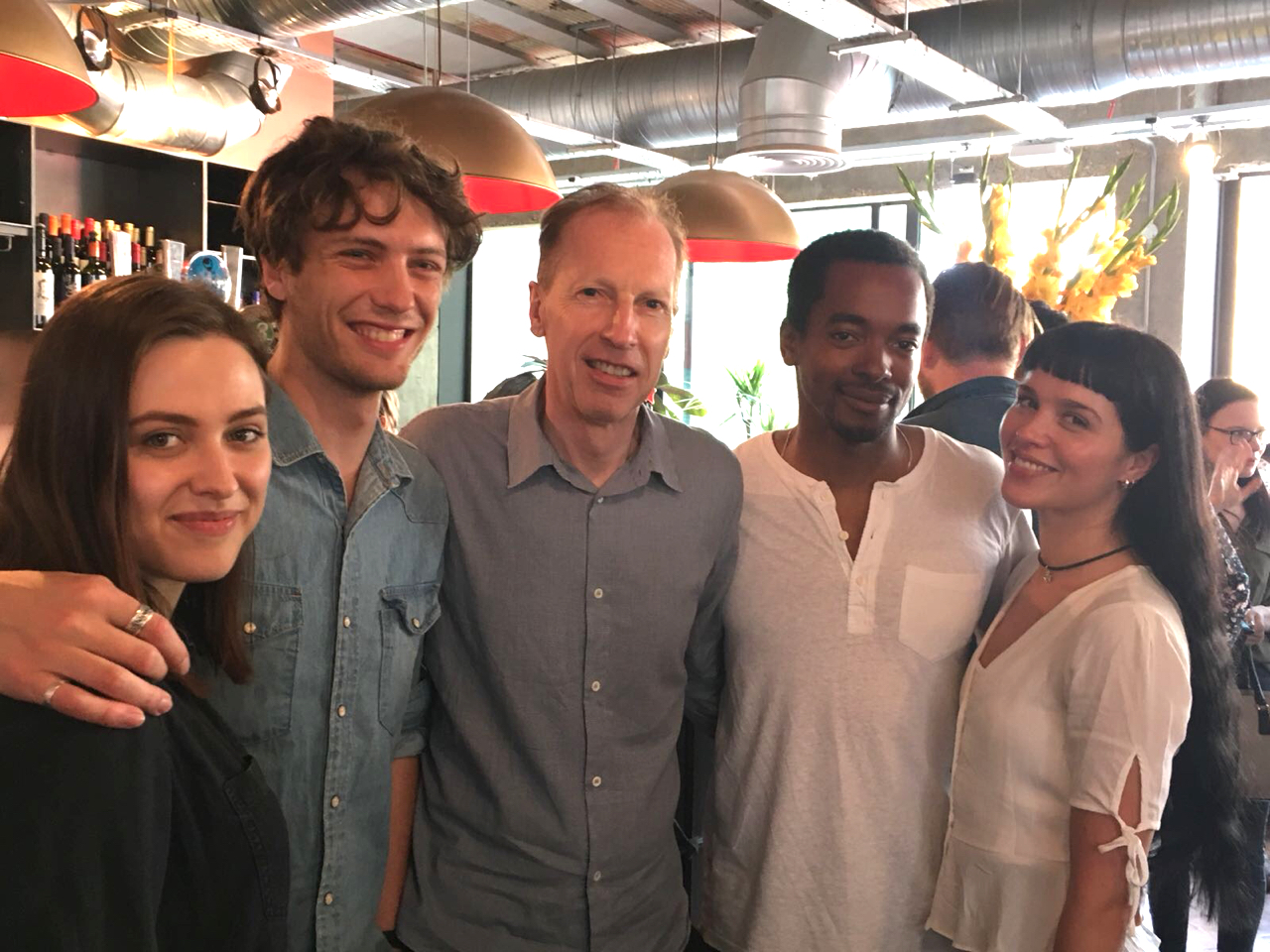 Could you, in your own words, summarise Burning Men?

Yes. So, Burning Men is a road trip movie along the east coast of the UK. It’s about two young lads [Ray and Don] who are in a band together and they decide to up sticks and sell their record collection in order to get plane tickets to Memphis [Tennessee]. On their travels, they stumble across my character, Susie, who kind of shakes things up a bit for them. Also, they discover a disc with potential, sort of mystical, meanings and end up on massive adventure, basically.

It’s a nice adventure. Your character Susie, could you tell me more about her role in the film?

She appears in the first half of the film. They [the boys] stumble upon a gig in Great Yarmouth and she ends up being a kind of gatecrasher to the road trip. She throws the boys’ friendship into some doubt, but it changes the dynamic of the group. A little bit mysterious, there’s some ambiguity around Susie and what she’s really wanting from this situation. She seemingly quickly trusts the boys, she’s very quick seemingly to want to be on board with the journey and the adventure. A little bit of a wild one. A little bit of a trusting one. She changes a lot for the boys. 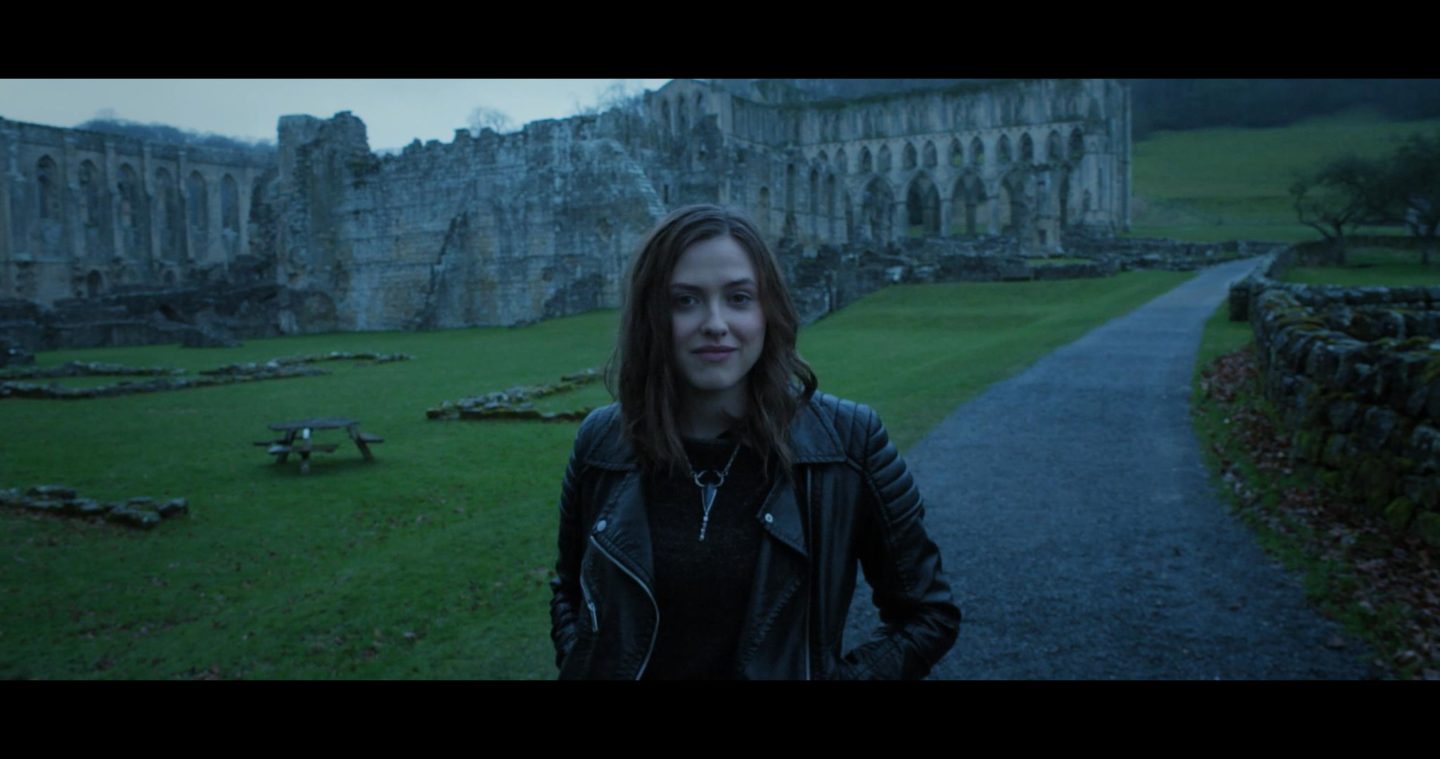 Yeah, it almost seems that Susie was destined to find the boys and help them with the journey in a way….

That’s definitely something I felt when I first read about her and we first started working. I feel like there is something a little bit otherworldly to Susie. She’s definitely into astrology and, you know, the kind of cosmic side of the world. I kind of felt like she almost knew that something like this would come to her in life. It’s almost like she was waiting for them. So, when she meets them, it’s like an instinctive decision for her that that’s where she’s supposed to be – that’s what she’s supposed to be doing. Yeah, you’re right, it’s like she’s meant to meet them and help them. A very fateful meeting.

A lot of the film is shot in point of view, which isn’t usually done. How did you find that filming method?

Pretty much all the film is purely point of view – there’s a few wide shots. At first, it was a real learning curve for the whole cast. It was totally alien and quite kind of bizarre in a way. To stare down the lens like that is quite, you feel quite vulnerable. You haven’t got a lot coming back at you, so you really have to engage the imagination. And, I guess, just be trusting. We had to trust Jeremy [the director] and just go for it. We found at first, whenever anybody was speaking that we’d automatically want to find their eyes. So, our cameraman would stand in for each character. We’d block a scene, and then each character would be replaced by the camera as we shot, and the actor would stand behind the camera to feed lines. We found little tricks along the way that helped us out- such as we couldn’t look at the actors if we were behind the camera. If it was our character’s POV, we’d have to kind of hide to feed the lines because as soon as you look around the camera and you’re visible, the actor will automatically want to find you, rather than stare down the lens. By the end of the shoot, we really were so used to it. To the point where, the next thing I worked, I found myself accidentally looking at the camera, which was quite embarrassing.

I thought it was an interesting technique, especially for a feature film. It’s something you would expect on a kind of low budget TV show, but it really worked. Especially when it was interlaced with the wide shots of the landscape. It worked well.

Yeah. I’m glad you like that. I’m really surprised at how quickly you do buy into the POV generally. I think a few minutes into the film and I had forgotten about it pretty much. It makes it more immersive, the technique, and it does create an energy for the film.
In that same vein, how this film is unique in a way. 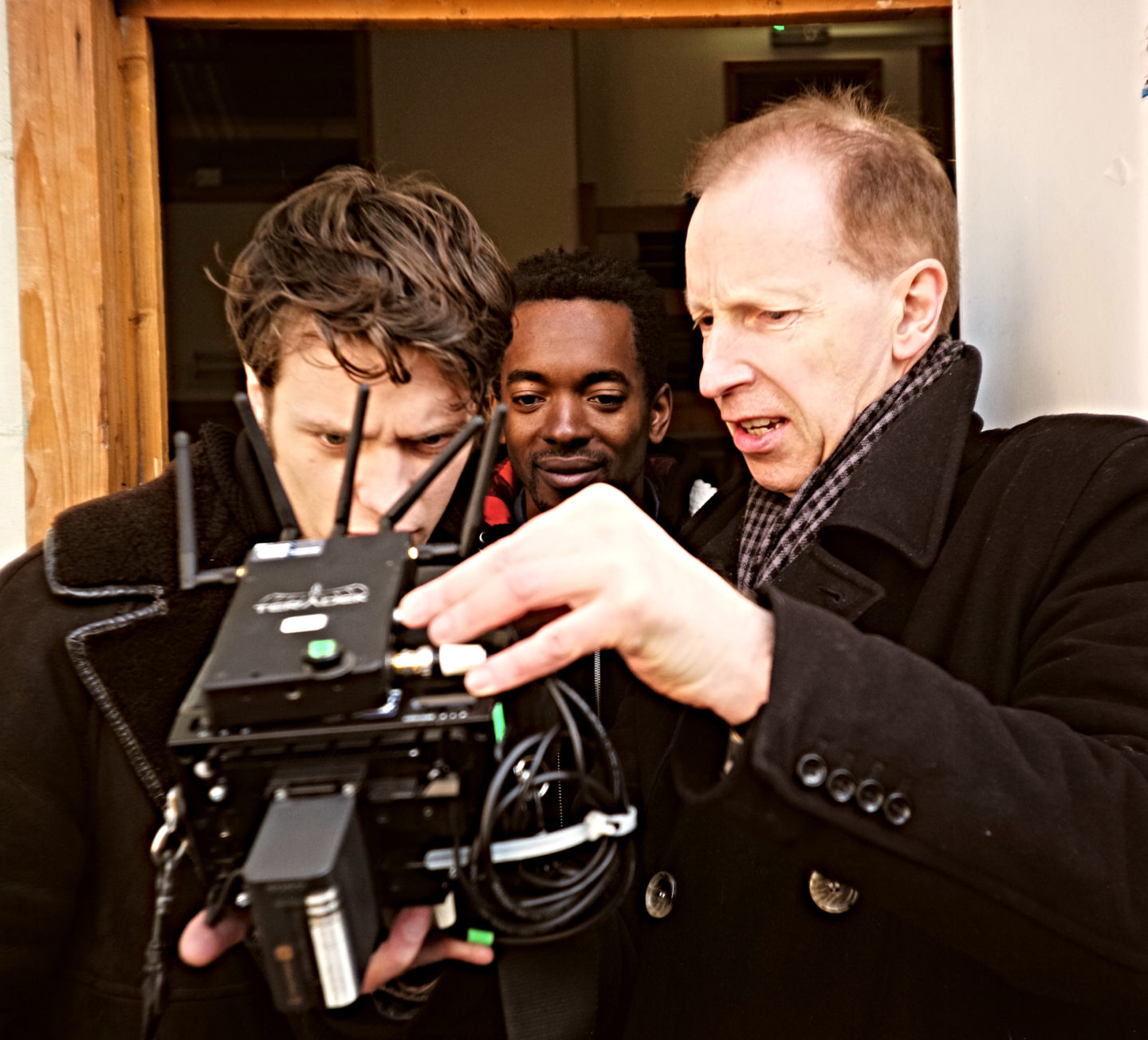 The cast on the set of the film with director Jeremy Wooding.

How does Burning Men compare to previous work you’ve done?

For loads of reasons, Burning Men is really quite different. I’ve done a lot of period dramas, so in that sense it’s nice to have a modern character to play with and a modern woman. The way I would describe the whole experience for me is that it just felt so free. Jeremy was keen to not have marks for the actors and to not contain us that way. We were free to move however we wanted. That was one of the joys of POV because the camera was never locked down, it was essentially always another character, so it meant that we were always so free to move exactly how we wanted. Nothing was set, we weren’t having to cheat camera shots. So, it was a fun experience to be able to just jump into the world and you’re away. There wasn’t much of a technical aspect for us to think about apart from the occasional POV-blocking issue. It was probably the most innovative job I’ve done. On the road as well, we managed to follow it almost completely chronologically, so we were on an actual road trip ourselves really. We didn’t stay longer than two nights in each location and it really was like, we’d shoot half of the day, and then we’d all get on the road for the second half of the day, arrive at a location, shoot a little bit and then crash for the night, wake up, and then we were on the go again. It was fast paced, but fun and beautiful, actually. I didn’t realise how gorgeous the east side of England was.

Burning Men will be shown in select cinemas from the 1st of March. What are the hopes for the film?

We really hope that it finds its people. It’s a unique film, it’s kind of genre-less in a way. It crosses quite a few genres, but we hope that the British public can enjoy seeing a classic road trip film set in Britain. Equally, audiences from elsewhere will enjoy it also. It’s relatable for a lot of people as well, you know, it’s that whole theme of being young and feeling lost essentially. Finding your world and your people and succeeding.

What I find interesting is that it’s a genre that’s very American, but the film itself feels very British….

Yeah, I think it’s kind of part of the fantasy for the boys in the film that it’s that rock ‘n’ roll, cool vibe, but they live in England. So that’s their world, it’s the whole aspiration of their wanting to go to Memphis, but, you’re right it [road trip] is a very classically American genre, but I think Jeremy has done a really good job of that twist of making it a British version.

One of the key elements of the plot is a sought-after vinyl record. What’s your most prized album?

Very sadly, I don’t own the physical album, but my favourite album is by David Ramirez called I’m Not Going Anywhere. I actually went to see him live, performing in St Pancras church, not long after we shot, with my dad. It’s an album I always come back to: I have listened to it to death, but it’s still not old for me. He’s incredible, his voice is just so atmospheric and he’s an amazing storyteller.

As we’re based in Cardiff, and you’re a Welsh actress from Cardiff, I wondered: how do you view the prospects of people in Cardiff, and by extension Wales, looking to get into the film industry and acting?

There are two veins to my thoughts on this one. First of all, we’re such a talented country. Our roots are so deep into theatre and the arts, music and drama. There’s so much talent in Wales. I think, yes, you’re always at a disadvantage if you’re not local to London. However, I think there’s no reason why we shouldn’t be up there in the industry. Welsh productions like Hinterland and Keeping Faith, which are amazing things are being made here. In fact, I presented a BAFTA Cymru award and it was an amazing evening and just the talent, and the atmosphere, at that event was unlike anything I’ve ever felt. It was supportive and there was such community. Yeah, I feel like it’s so rare to have that much goodwill at an event like that. Equally, it’s so, so frustrating when a lot of productions, I find, even with things that are set in Wales, half the cast are English. Either putting on a Welsh accent, or they’ve somehow written into the script that all these English characters live in Wales. Sometimes, it’s more than half. Sometimes, the majority of the cast isn’t Welsh, and it just really affects me because there’s so much talent in Wales. There’s so much talent and there’s just no need to be casting outside. I think hopefully the opinions, or maybe the impression, of Welsh talent is changing slightly with these amazing productions we’re coming up with. Hopefully, the industry can recognise the talent here in Wales and not be so dominated by England and London.

Burning Men is released in select cinemas on 1st March, with a regional tour across the country. For more information, please head to http://bit.ly/BurningMenTour 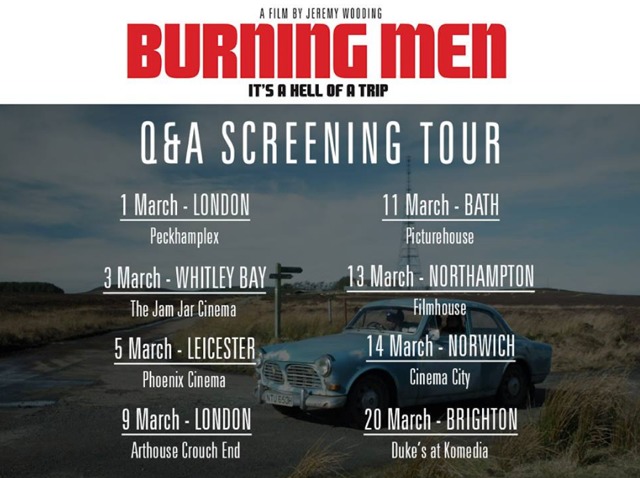 You can watch the trailer here: https://youtu.be/v7RkhpEiKWw

How to hang out with your mates virtually