So, the moment that 5,000 expectant patrons of Cardiff’s Motorpoint Arena had been waiting for finally came as The Big Yin himself, Scottish comedian and living legend Billy Connolly slowly made his way out onto the stage to glorious applause and cheers from all those in attendance.

My brother and I have been looking forward to sharing this moment together for some weeks now, for what we are about to see is history. This could very well be one of the last times that Connolly not only performs in Cardiff but one of the last times he performs in general. There is a very real possibility that this time next year Connolly could be in no fit state to perform. 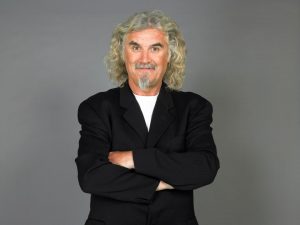 But I put these thoughts from my mind for I am determined to enjoy this evening no matter what happens. When Connolly does finally come on-stage he comes across looking more sheepish than usual, like a white-haired cowardly lion doddering into motion. But it only takes one minute before he’s off and running.

Eventually Connolly decides to make reference to the fact that he does indeed have Parkinson’s disease by acknowledging a slight tremor in his left hand. He deals with this in classic comedy style by making light of it then regales the audience with the tale of how he spoke with actor Ian Holm, who also has Parkinson’s, who told him not to worry.

“If your hand starts shaking Billy, he said, just put it in your pocket.” Connolly reminisces, “What I didn’t realise until later was that he meant my jacket pocket.” With an appropriate hand gesture Connolly has the entire audience in fits of laughter only to finish them off by saying, “And if you think that was bad wait till you hear about the cancer.”

From that moment onwards Connolly continues in top form regaling us with tales of his encounters with Aberdeen police and drug dealers, of his displeasure of encountering having to work with the FX men on The Boondock Saints and a funny tale related to him by Brian Cox and Liam Neeson whilst on the set of Rob Roy about a FX man, his van and two rather unfortunate cats.

When it comes to talking about the new generations obsession with selfies ,Connolly shows himself to be incredibly accommodating, saying that “I don’t mind taking selfies, since it takes considerably longer to explain why you don’t want to take one than it is to just take one.” He has one condition though which is “If you ask me make sure you’ve got the thing out when you do, or else if you take time looking through your bag to find it then it looks like I’ve asked you for one.”

“Make sure you’re ready to take a selfie if you ask, or else if you waste time looking for it in your bag then it looks like I’ve asked you.”

Connolly continues in this fashion, popping in and out of his tall-tales, having everyone in the audience in tears and fits of laughter for two hours straight. There were times when I myself, though I wanted to, was incapable of laughing as I no longer had the girth to do so.

It is true that Connolly has come a long way from the Glasgow shipyards, working with Gerry Rafferty as amateur folk artists, to his first hysterical appearance on the Michael Parkinson show in 1976 which made him into the national star that he is today, to working in Hollywood with the likes of Tom Cruise, Sharon Stone and Dustin Hoffman going from strength to strength.

But this most recent tour of his will cement his reputation right to the very last of being one of the giants of comedic performance as well as one of the greatest performers full stop ever to have come from out of the British Isles.