Horrifyingly brilliant! A quirky and kooky musical experience that anyone can enjoy!

I can’t get the songs out of my head!

As a child, The Addams Family movies had to be some of my favourites. As with most female millennials, I identified with (and still do) Wednesday Addams, so I was really excited to go and see The Addams Family Musical at Wales Millennium Centre. As I took my seat I looked up at the stage and saw the big ‘A’ and the spooky set and couldn’t wait for the show to start. Suddenly, a very familiar piece of music started up that had everyone snapping their fingers before we were treated to a truly ‘spooktacular’ opening number – ‘When You’re an Addams’ as Act I began. 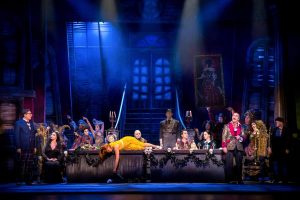 The plot is an interesting concept. Wednesday Addams is now a young lady and she has met a boy (by shooting a pigeon with her crossbow in front of him – classic Wednesday). It’s a coming of age story told in true Addams Family style with Gomez trying to come to terms with his daughter growing up and also dealing with keeping a secret from his wife when Wednesday confides in him. Overall, the story is the typical cliche ‘coming of age’ trope but with a lot of twists and turns on the way that I didn’t see coming. A very original twist on an overdone trope. 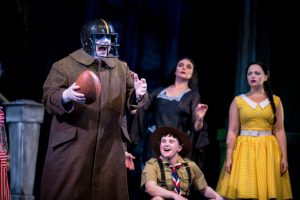 All singing, all dancing!

The cast has been put together really well and was one of the first things I noticed. I did feel like some of the minor characters were better actors, singers and dancers than a couple of the main ones who, I don’t think quite managed to do the writing justice. However, this is just from my critical ‘reviewer’ point of view, for the average person going to see The Addams Family Musical, I don’t think it would be something you would notice.

Carrie Hope Fletcher, as Wednesday Addams was not what I was expecting at all and at first I really couldn’t see her in this role, but once she started to sing, all of my concerns vanished. She is an amazingly gifted singer and performer and her talent really does sine through on the stage. Les Dennis had the role of Uncle Fester and it was eerie how on point he was. He embodied every part of his role and really brought the character to life, I honestly could not fault a thing about his performance (although, the side plot of him falling in love with the moon was… strange). 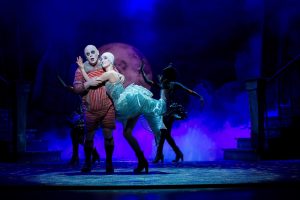 Cameron Blakely as Gomez was a real treat to see on the stage, he brought so much energy with him and nailed the role. He had the audience’s full, captivated attention and had them constantly reacting which was brilliant to see. Although I appreciate Samantha Womack as an actress, I don’t feel this as the best role for her. She did a good job, however, I think the role of Morticia is a hard one to pull off for many actresses and she didn’t quite have the raw and seducing qualities that Anjelica Huston did in the movies. From a critical point of view, I could see her trying to act too much which was distracting at times, however, I still believe she did a really good job with such a challenging role. 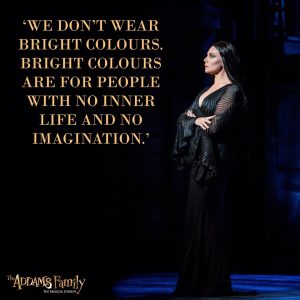 For me, I think the stand out performance has to go to Dickon Gough as Lurch. His comical timing was spot on and he had the audience in constant fits of laughter. He appeals to the older generation and the younger one and anyone in between. It’s a timeless comedy he brings to his role and if they ever remake the movies, I really hope he gets the part of Lurch in them.

I am by no means a dancer but when it comes to musicals, I absolutely love looking at the choreography. Alistair David did an amazing job of bringing the cast together and getting some really good energy out of them. The ensemble flowed so effortlessly across the stage and looked so natural as they moved while the cast all moved as one during the bigger numbers and had a very unique way of dancing that was particular to their individual characters. 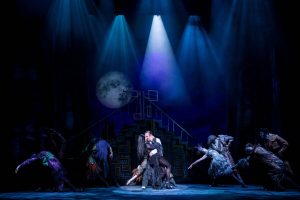 What Do You Think?

Speaking to a member of public, Andi, who saw the show on the same night as I did, Andi had this to say:

“It was a great story and certainly not what I was expecting. Mind you, I’m not sure what I was expecting! My favourite Character was Wednesday. I felt she was the strongest character and a very good actor with a strong voice. Saying that I also thought Gomez was really good. My favourite song was probably the opening number, “When You’re an Addams”, however I loved Les Dennis singing to the Moon (“The Moon and Me”).

Top 3 things. Hmmmm
The “Full Disclosure” scene was brilliant! As I mentioned, Fester singing to the Moon sketch! And as daft as it sounds, the ending as Lurch leaves the stage and wiggles his bottom for the audience!

I would recommend it without a doubt!” 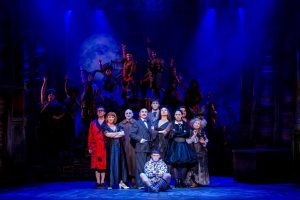 It was a really good night out and an excellent show with some truly superb actors. Everything as put together beautifully. The lighting, scenery (and transitions), music, choreography, writing, directing and of course, the acting, singing and dancing. If you’re in Cardiff I couldn’t recommend it enough! Tickets are available on the Wales Millennium Centre with shows until the 12th of August – Tickets!

Special thanks to the WMC for providing press tickets.

All images taken from The Addams Family – A Musical Comedy Facebook page.

REVIEW: Grease is the Word @ WMC