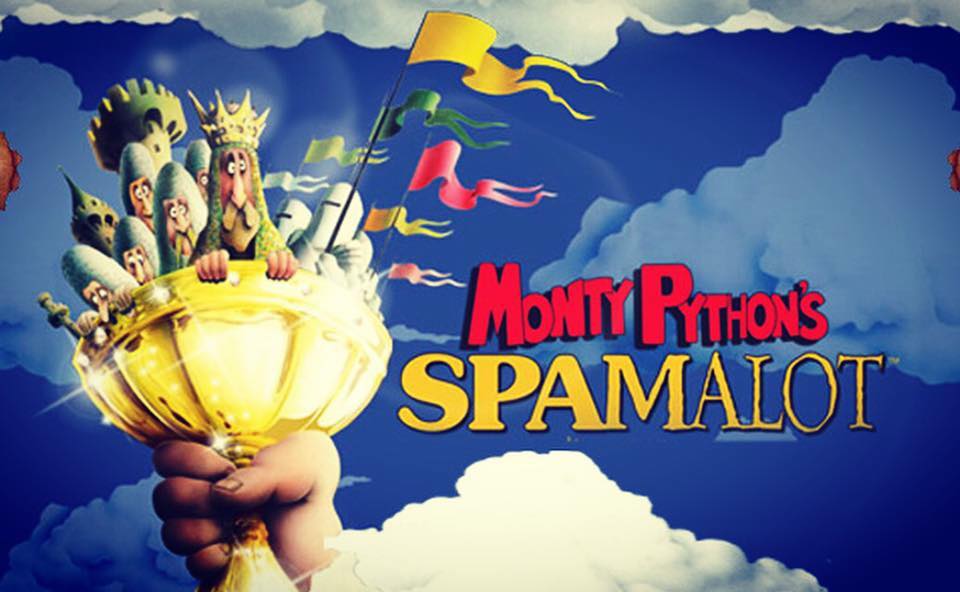 Around a year ago, I remember hastily searching for my purse (as well as the permission and accompaniment my mother!) to catch the penultimate showing of Everyman Theatre’s 2016 summer musical Into The Woods. No regrets were made in my decision to see it, to put it simply. As I enjoyed it so much last year, I knew I had to return to the festival this year as an already avid theatre lover, but especially after seeing a quite well known musical title – Spamalot!

Spamalot is a musical comedy adapted from the Monty Python classic Monty Python and The Holy Grail and follows a parody of King Arthur as he aims to set up his famous Knights of The Round Table. Many musical numbers later, a fearful closeted homosexual, a cowardly musical hopeful, a heavy right-wing political radical and an inept scholar join his clan – imagine being at that Christmas dinner! – with a God-given quest to find the Holy Grail used at the Last Supper – with many, many obstacles. 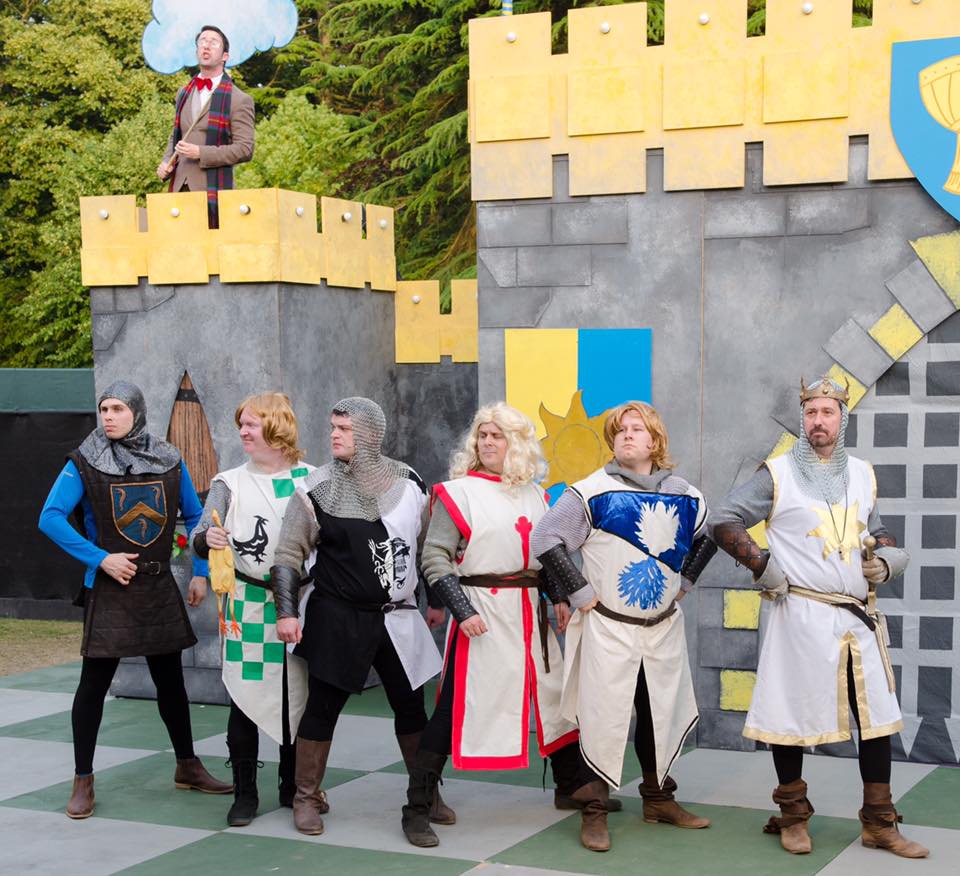 Opening the production, we have a brief history lesson from a historian dressed in 1980s secondary school teachers’ attire introducing us to the context of the England situation at the time of the piece  – spoiler! a lot of plague! – however, that was clearly lost in translation as a group of Finnish dancers race on stage performing their ode to Finland, Finland, Finlaaand (with a lot of fish slapping).  The entire play is full of extreme stereotypes (i.e. the exuberantly happy Finnish and the stripy-shirt-and-beret-wearing French) which did cause a few giggles, however, would it truly be a Monty Python without it?

All four knights’ unique and somewhat contrasting personalities created the perfect social mishmash – even though the political radical, Sir Dennis Galahad, had a complete change of personality and became almost a royalist! This was hilariously shown through a switch from a northern common accent and farmer boy stance to stereotypical male protagonist superhero (quite similar to the actor’s character in Into The Woods last year) all within the space of a minute. For me, Galahad, portrayed by Lewis Cook, was the funniest of the characters due to all the bad yet insanely hilarious lines that made the audience howl with laughter. Never have I ever heard anyone so protective over their forename – and I disown all who misspell my name! 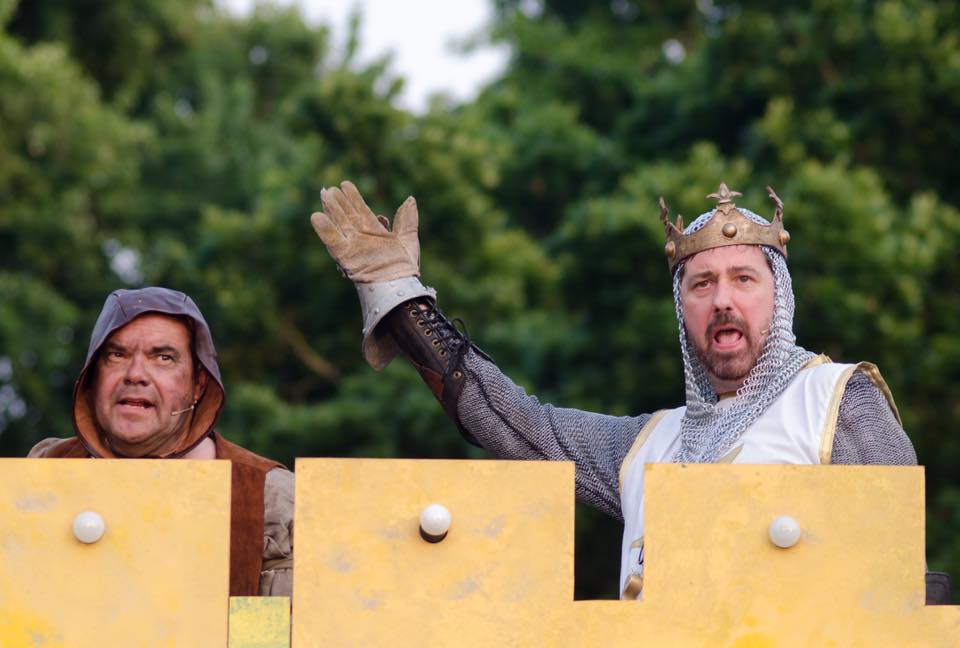 Also playing a part in the satirical comedy for some of the time (and according to them, clearly not enough!) is the Lady of The Lake portrayed by Laura Phillips. I am adamantly sure that she is a real life goddess. In Into The Woods last year, she portrayed the Baker’s Wife, soft and timid to an extent, however, it was in this production that I felt she truly found her Grail and released her inner diva (all good connotations!). The high level of power in her voice shocked me in the sense that I was shocked she was not the Lady of The Lake in the West End!

To redo a satirical comedy and make it suited to the purpose, you need current political events to mock and thankfully our country is bursting at the seams with this sort, so I can only imagine the party which occurred in the drawing room. Even though some was used (eg “Show Theresa May the door” as opposed to “We’ll be shot by Michael Moore”), I somewhat expected more focus on the EU referendum but the loud cheers heard after the call for resignation made by Not Dead Fred gained a heavy amount of cheers – which implied the political standpoint of many of the audience members! 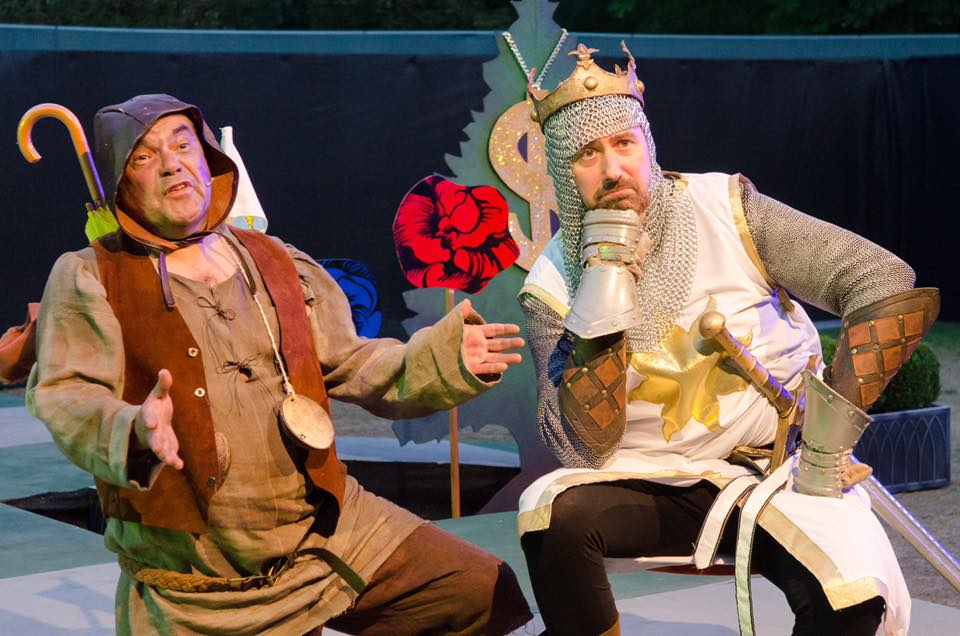 My favourite song in the production, performance wise, has to be His Name Is Lancelot. I have sung it every day since so far! Herbert, portrayed by Daniel Ivor Jones – also the Historian, was full of so much fun, joy and hilarity I would be heavily surprised if a smile didn’t break out on all the audience members’ faces. I applaud the costume department as well for the fantabulous pink frills and hats on the male dancers – it worked so well! That and Lancelot’s glittery body suit. The upbeat, Copacabana vibe really set the feel good element which is needed in every show like this.

Also, in every show, there comes a different sort of song like this (that was the best reference I could do, I’m sorry) which starts off soft and low, then ends up with a kiss – first sung by Lady of The Lake and Sir Galahad’s after his enlistment in the first Act then Galahad is replaced by King Arthur in Act 2.

“Spamalot is the perfect musical for those who love musicals or for those that like to take the mickey out of musicals – or even in between!”

I enjoyed every minute of this performance however as I saw it twice (Friday 23rd then Saturday 24th as a volunteer) there were some moments which were different in each of them. Therefore on the second night I saw it, I was expecting to see a replica of the previous performance, not a new show as I usually view things. This made it a bit difficult for me but it did not take away the enjoyment factor as I still gave a standing ovation for both nights.

Richard Tunley, director and choreographer, and Rob Thorne Jr, musical director, heavily outdid themselves in putting together the funniest of shows I have seen in a long time!

I highly, highly, highly recommend seeing this show while you have the chance because there is the perfect amount of sass, fire and lack of political neutrality needed to do a Monty Python justice!

To end, a comment from my aunty and uncle who joined me on Friday night and also managed to see Spamalot at the New Theatre in 2015: “I enjoyed that [Everyman’s] performance a lot more than the other one”

And remember, support local theatre and always look on the bright side of life!

Reviews: WNO – Figaro Gets A Divorce & In Parenthesis @ WMC