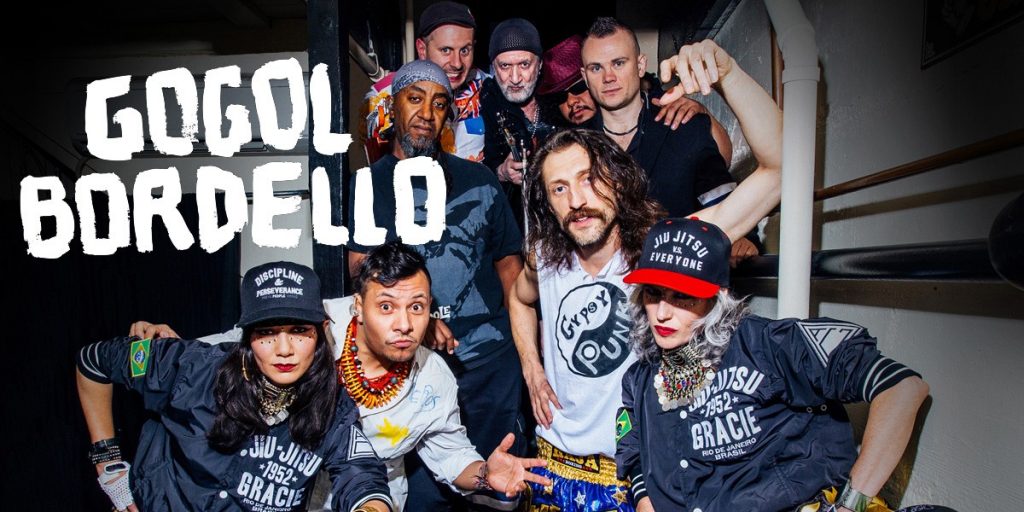 On Monday 3rd July gypsy-punk group Gogol Bordello played a fantastic show at Tramshed in South Cardiff. The gig itself was the only Welsh show in a handful of performances in the United Kingdom in anticipation of their 8th album, Seekers and Finders. It’s due to be released on August 25th on Cooking Vinyl Records with the first single Saboteur Blues available on YouTube.

Tramshed is a grade 2 listed building and was formerly an old tram depot, but it’s now been beautifully restored into a music and arts venue a couple of years ago. The show had sold out, with a lively atmosphere ensuing both inside and outside.

The support for Gogol Bordello was Dave Hause and the Mermaid, a rock and roll band from Philadelphia. They played an upbeat set of punk-inspired rock music including the title track from their third album, Bury me in Philly.

Gogol Bordello came on stage at 9pm. Their set was a surprisingly equal mixture of songs from their later albums, something difficult to do with such a formidable back catalogue. Songs from Trans-Continental Hustle such as My Companjera to warm up the crowd before playing some bluesy-sounding songs from their new album, which were very well received. Some older gems from the first few albums were performed such as my Sacred Darling, Alcohol and Sally. But the highlight of the evening was definitely Start Wearing Purple, much to the delight of the crowd.

The group are made up of eight or so different members fronted by Eugene Hutz, who is a very charismatic and energetic front man. The live shows of Gogol Bordello are well known for their energetic nature, but I’m not sure I’ve ever seen a show like it or seen a group that so genuinely enjoyed being on stage. It’s one of the best shows I’ve ever gone to. Gogol Bordello played for two hours, and played three different encore songs. It’s an experience like no-other.

These 8 Hottest Music Festivals Will Make Your Summer Unforgettable