It may be hard to resist being encaptivated by the gaze of Patrick Swayze and the spin of the potters wheel in that iconic scene in 1990 Oscar-winning film, Ghost, but how would this memorable and supernatural love story be recreated on stage?

On the 19th October 2016, I went to find out for myself, by seeing the musical stage production of Ghost at the New Theatre, Cardiff. The original film tells the story of a couple, Sam (Patrick Swayze) and Molly (Demi Moore), who are attacked whilst walking home one night. Sam is murdered and then becomes caught between this world and the next, where he attempts to avenge his own death whilst protecting Molly from harm. 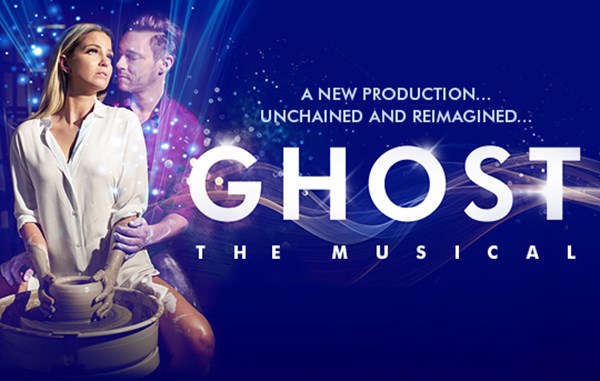 In the musical adaptation, Sam is convincingly portrayed by Andrew Moss, recognisable from daytime soaps, Hollyoaks and Doctors. The acting is believable, with surprisingly powerful vocals and bringing an element of humour to the part. I particularly liked one of the opening scenes where Andrew adds an Elvis style twist to Unchained Melody, famously associated with the original film.

Molly is played by Sarah Harding of Girls Aloud fame, who, in her musical theatre debut, conveys the sweet and sensitive nature of the character. However, she perhaps lacks some depth of emotion and vocal range for some of the ballads. The relationship between the two central characters is somewhat unconvincing at the start, lacking the sizzling chemistry seen between Swayze and Moore in the film, however, this does develop throughout the performance, becoming more believable towards the end.

The highlight for me is the memorable performance by Jacqui Dubois

The highlight for me is the memorable performance by Jacqui Dubois, who plays the character of Oda Mae Brown, a phoney psychic who can hear Sam and is reluctantly roped into helping him. The entertaining and comedic performance, with some rather impressive vocal ability, stole the show and was spot on to the screen character played by Whoopi Goldberg. Dubois’ performance really did deserve the cheering audience ovation at the end.

The story works fairly well as a musical stage production with appropriate introduction of song and use of choreography, however, I felt that some of songs were slightly over-the-top and perhaps a bit ‘cabaret’, which removed the element of drama and emotion from the scene. This turned the production into more of a comedy than a romantic drama at times.

The creative set design was effective and believable, with smooth and seamless transitions between scenes. In the original film, the special effects were somewhat impressive for the time, featuring objects flying through the air and ghosts walking through doors, and this is cleverly and convincingly depicted on stage. The scene that stands out for me is when Sam meets another ghost, played by Garry Lee Netley, who is clearly angry that Sam is encroaching on his territory and tries to get rid of him. This features The Matrix-style slow-motion choreography, synchronised with sound effects, which is visually very effective. The use of sound and lighting effects throughout the production is particularly powerful in highlighting the supernatural element of the story.

Overall, I thought that the production was dynamic, immersive and entertaining. The story works well as a musical with the script and characters deviating little from the original film, however, I couldn’t help but compare and feel that it does lack the emotive, romantic energy and drama of the film. Perhaps this would be enjoyed more by someone who has not seen the film and so has less expectation.