Though tonight’s show was not as heavily sold out as previous shows in the Festival of Voice, like John Cale and Van Morrison, and although the New Theatre was a somewhat smaller and less impressive space than either the WMC or St. David’s Hall, that did not detract away from the magnificent and almost cinematic sound of Anna Calvi and her guitar.

Born in Twickenham in 1980 to English and Italian parents, Calvi since 2005 has proven her talent in the masterclass of both singing, song-writing and guitar-playing, releasing two albums (both of them Mercury Prize Award nominees) and an EP in quick succession between 2011 and 2014. 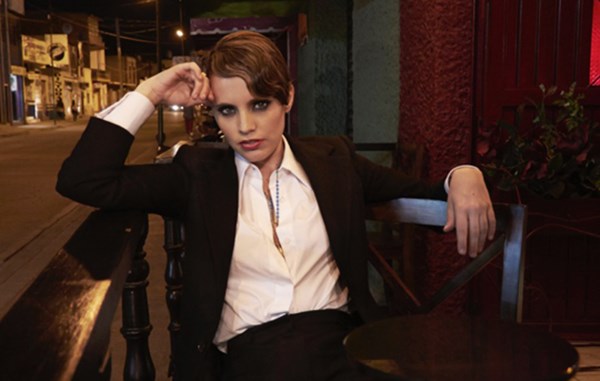 Her musical collaborations include artists such as David Byrne of Talking Heads fame and Brian Eno who played and performed backing vocals on her first album, Anna Calvi.

It is true that Calvi presents something of a contradiction to her fans and to those who know her. When in interviews and talking to her audience, Calvi’s voice and demeanour come across as very mousy, that is until she starts to sing, straining her lungs to burst forth with such lush and operatic overtones.

But it is her guitar-playing that evokes so much emotion. It proves just as enigmatic a performer as the young woman who wields it, the reflection from the stage lights on the control knobs on her guitar searing out through the mist into the front rows of the audience like some heavenly searchlight.

Calvi has often been quoted as saying that she likes to create new noises from her guitar and tonight she proved herself the most immaculate and technically-gifted of guitarists to grace our stages since the likes of Mark Knopfler and Pete Ham.

| “One of the finest performances of this entire festival” |

And, in tonight’s performance, that operatic voice and those visceral guitar tones were supported by the choral symphonies of eight distinctive voices from the Heritage Orchestra, who melded perfectly with Calvi’s sound and style, reaching a crescendo of light and power on songs like Blackout and Desire.

Although one was disappointed by the fact the performance was ended somewhat earlier than had been anticipated, that still does not take away from the fact that, tonight, Calvi played what I believed to be one of the finest performances of this entire festival. How?

By using, so evocatively, those voices available to her. Her own voice, loud and as proud as a lioness; the voices of the choir, ethereal and always majestically rising; and, finally and most important of all, the voice of her own soul, which she manages to bring to life so passionately through her guitar.

REVIEW: Escape The Scaffold @ The Other Room