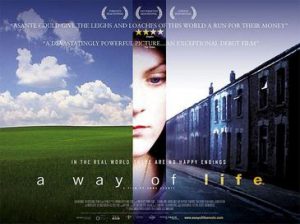 Poster of A Way of Life

On Wednesday 12th July, Bafta Cymru and Chapter hosted award-winning Amma Asante for a very special showing of “A Way of Life” at Chapter Arts Centre in Canton. The event was part of Bafta’s debuts tour which is showcasing different Bafta-award winning films to audiences in venues such as cinemas and schools to mark the 70th anniversary of Bafta.

Filmed nearly 13 years ago, A Way of Life explores the life of teenage mother Stephanie living in South Wales. The film deals with themes of gender, race and everyday portrayal of the shocking poverty that Stephanie and her family lives in. “A Way of Life” filmed widely across Cardiff before the regeneration of Cardiff city centre and the docks, a glimpse into another world long gone. It won over 15 awards upon its release and carved out Amma Asante’s reputation as a phenomenally talented British director. Asante has gone on since to direct Belle and United Kingdom, both of which were released to critical acclaim.

The film showing was organised additionally as an homage to the film’s producer, the late Peter Edwards, who passed away last year. It marked a rare opportunity to see such a groundbreaking film on the big screen at an extremely special and intimate event.

Following the film, there was a Q+A with Amma Asante hosted by CEO of Ffilm Cyrmu Wales, Pauline Burt where they discussed the film industry and Peter Edwards’ legacy in Welsh film and television.

Bafta frequently organise events not only in Cardiff, but across Wales. The next event in Cardiff will be a showing of the Oscar-winning “White Helmets” on Wednesday 9th August .