We received two reviews of this play. Be sure to check out Weeping Tudor’s review as well.

It was Tuesday 31st May, on a boiling hot night, that the audience at the Sherman Theatre, fanning themselves with their theatre programs, were introduced to playwright Patrick Jones’ new play Before I Leave, with one of the play’s central characters, the union stalwart Willie “Rocky” Stroker, asking if the heating could be turned up on the library radiator. The laughs went forth appropriately from that point onwards.

Right from the start, Before I Leave’s story smacks of a feel-good comedy about a group of people living (not suffering, as they say) through various phases of dementia, who are brought together to sing in a choir that practices regularly at a local library threatened with closure, based on the real life Cwm Taf choir in Merthyr Tydfil.

But, before I go any further, allow me to state clearly that this is not a play that the whole family can enjoy. Even though it contains gentle moments of pathos and of awkward comedy, there are moments of great bleakness when the audience is constantly reminded of the whole point of the play, with scenes reminiscent of the Welsh care homes scandal and even a saddening murder.

But, all the same, this sort of confusion brought about through a blend of light-hearted comedy, musical numbers and kitchen sink realism does not take away from the play’s greatest strength, the characters. 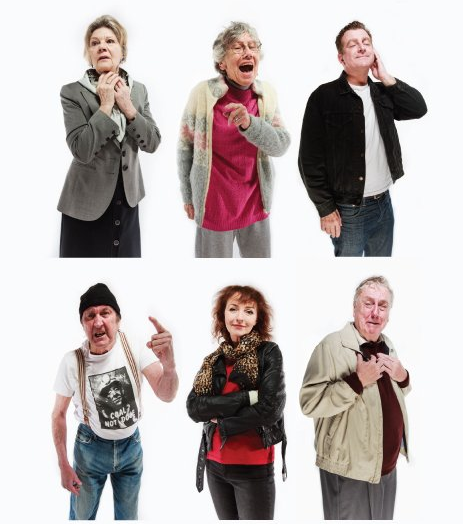 The old punk rockers, Joe and Dyanne (the latter played by Melanie Walters of Gavin and Stacey fame); Rocky Stroker, a former miner still resolutely and doggedly stuck in the world of the 1984 Miners’ Strike; and Evan James, often in conflict with Stroker, an ageing former police officer whose mental deterioration becomes very rapid after an emotionally distressing argument with his scheming daughter.

Each of their stories and the stories of their fellow characters are what drives this play from one moment to the next; whether it be the choir’s humble beginnings in their local library, a marijuana freak-out immediately before their Britain’s Got Talent audition, or a tearful reconciliation between Rocky and Evan with their singing of Calon Lân – the most beautiful of all Welsh choir songs – together in the freezing cold.

The show comes to its final emotional apex with the singing of one final song. It is a song newly written for the show by the playwright’s brother, Nicky Wire, lyricist and bassist for the Manic Street Preachers.

The song takes its name from the show, Before I Leave, and features some of the best lyrics that Wire has ever written in his career. With lines like these, it’s difficult not to feel a lump in one’s throat as the song stirs one’s spirit into ideas of hope:

“I’ll sing this song until I die,

Sing it softly with some pride,

Before I leave, I’ll leave you some memories,

The good and the bad the happy and sad.”

In conclusion, this is probably one of the greatest plays to come out of Wales in the last few years. It contains all that you might want out of Welsh dram; laughter and love, sadness and anger, heartache and hope, and – what’s more important – a deep emotional resonance with the voice and song and the unique role that they can play in our lives.

Before I Leave continues to show until June 11th 2016 at the Sherman Theatre.