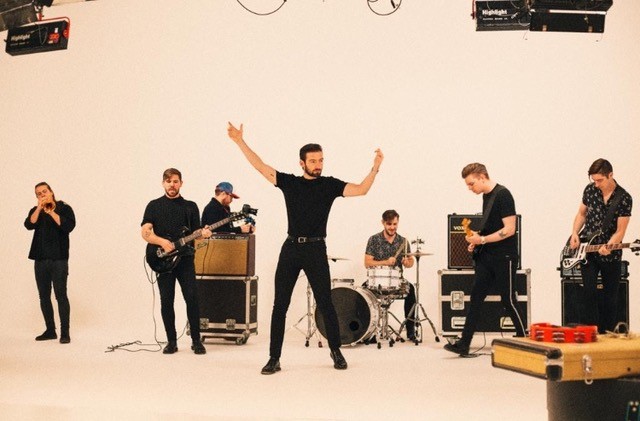 Inspired by director Quentin Tarantino, these pseudo-desperados challenge you to witness a duel between mariachi brass and indie rock ‘n’ roll. a melding of genres which Tarantino is famed for, Red Rum Club have applied this ethos to music. A sextet, Red Rum Club aren’t your typical alternative rock group, which features a trumpet in the mix. Along with further influences from the ’80s, including from fellow Liverpool band Echo & the Bunnymen, and a splattering of poetry, Red Rum Club have carved an identity that is authentically theirs.

An example of the cinematic influence is the single ‘Angeline’ which sounds like a likely candidate for a Tarantino soundtrack. Once Upon a Time in Hollywood is coming out soon you know. Frontman Fran Doran says of the single:

“Angeline” is the first song that was written after Joe “The Blow” on trumpet joined. It’s a combination of the Bunnymen-esque guitar lines that we’re known for with powerful mariachi brass. We thought it would be a boss song to drive to as it has an undeniable raw power and so we initially named it “Gasoline”, which was later changed to “Angeline” to make the tune more personal… It’s always been a big feature of our live shows to open with and it’s definitely seen as a fan favourite. There’s just no other song better to set the mood for a RRC gig.”

What better way to spend a Thursday evening than the party Red Rum Club has to offer?

Red Rum Club play The Moon, Cardiff on Thursday 14th March at 19:30. Tickets can be purchased from This Feeling here: https://www.seetickets.com/tour/this-feeling/

Album Matador is out via the Modern Sky UK label now.

Electric Wave Festival is kicking off this weekend!

Peace First: What is it and how can I get involved?