In the final of our RAWFFEST countdown articles, Edward Lee, the man behind the Sprout’s Strangetown podcast, tells us about his input to the youth arts festival.

RAWFFEST, the Welsh Youth Arts Festival, is going to be held in the Wales Millennium Centre in Cardiff Bay this year and is full of amazing workshops, shows and art from Welsh young people. 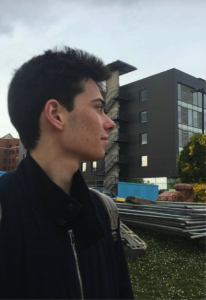 Where do you live?

Check out my exploits @edwardlee_writer

Are you a Placemaker?

For RawFfest I work as a Placemaker and as one of the heads of the festival’s literature strand. During the festival itself, I’ll be leading a workshop on how to write comic books, as well as performing in Media Academy Cardiff’s Bard In The Bay theatrical piece.

How did you come to be involved in organising the festival in the first place?

I was attending an open day event last year for ProMo-Cymru, the organisation which runs The Sprout, where I met one of the heads of RawFfest. I am relentlessly awful at networking, but we wound up having a little chat and I soon joined the project as a Placemaker!

As a graduate, the post-university world can seem a pretty daunting and contradictory place, full of trainee opportunities which demand extensive experience, or organisations which merely engage with young talent on a surface level as a kind of quota-meeting virtue signal. Thankfully, however, groups such as RawFfest, Radio Platfform, and Chapter Arts’ Youth Programmers are changing this and offering genuine opportunities for young creatives in Cardiff, with RawFfest in particular accommodating and engaging with talent across the wider country.

For me, RawFfest being led by young people is a crucial part of its dedication to offer something original, quirky and daring to the arts scene in Wales. Personally, it has allowed me to feel that I have truly contributed something towards Cardiff’s cultural community, and allowed me to work for opportunities I could not have found elsewhere. Starting as a Placemaker out of faint intrigue to see if I could help out, my roles now as a literature programmer and workshop leader both developed naturally from my time with the RawFfest team, and the youth-led nature of the group means that anyone else can develop and go through a similar journey to me, or begin a journey uniquely their own.

What event as part of the programme would you like to attend as an audience member?

Not to blow my own trumpet too much, but of course the workshops and performances of the literature strand! We’ve got a distinct and unconventional line-up of workshops, all adapting young creatives to our modern world of evolving mediums and platforms. With workshops on arts criticism, self-publishing, professional storytelling, folklore, poetry, DIY Zines, illustration and, of course, my own workshop on writing comic books, our mission is to introduce people to different ways of thinking about literature, provide them with new skills to take out into the world, and most importantly to have a great time!

Get your Rawffest tickets now. We may also be able to arrange some press tickets through TheSprout.

FREE Things to do in Cardiff: 26 July- 1 August