AFTER getting into trouble for sneaking into places he shouldn’t be, Lee Nelson is back where he most definitely should be – live onstage!

Under his real name, Simon Brodkin first burst onto the UK’s comedy circuit in 2004 and soon became a familiar face on Al Murray’s Multiple Personality Disorder in 2009 whilst portraying a range of diverse personalities including the cheerful chav, Lee Nelson. 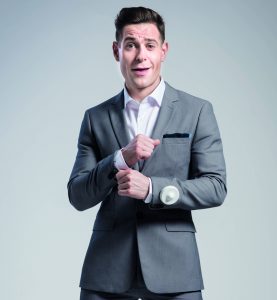 In recent years, Simon has established an infamous reputation as a serial prankster at worldwide events leading to the Channel 4 documentary broadcast earlier this month entitled Britain’s Best Hoaxer.

In March 2013, Simon was arrested whilst in character as Jason Bent when he warmed up with the Manchester City before their clash with Everton at Goodison Park. The following year, he went one step further by donning a smart suit and attempting to board the plane to Rio with England’s World Cup football squad.

Later that year, Simon would endure yet another skirmish with security when he pretended to perform alongside Stereo Kicks on The X Factor. But the stage invasions didn’t stop there as he gatecrashed Kanye West’s headline set at Glastonbury 2015.

However, his most daring wind-ups were still to come. Firstly, he showered then FIFA President Sepp Blatter with dollar bills on live TV in July 2015 amidst the organisation’s corruption scandal, which inevitably led to another arrest. Then in June 2016, he hijacked future US President Donald Trump’s re-opening of his golf course by controversially handing out free Nazi golf balls to the crowd.

Guaranteed to be no-holds-barred, Lee Nelson’s new show Serious Joker is not for the faint-hearted!

Tickets are priced £20 (plus a £3.95 Ticket Service Charge per transaction and an optional £1 postage fee).

Minus the Bear Announce Cardiff Show