“The land of my fathers

Is dear to me,

Country of poets and singers,

These are the first few stanzas from our national anthem, Land of My Fathers. Appropriate words I think to describe a country so enamoured with the musical voice. Our Male Voice Choirs are internationally renowned, our Eisteddfodau date back hundreds of years, and our history continues to inspire the songsters with the stories of Welsh martyrdom and sacrifice.

This year, the Wales Millennium Centre‘s (WMC) brand new Festival of Voice embraces this cultural heritage with open arms. The events, which include plays, operas and musical performances from a variety of artists, are taking place in various venues around Cardiff across ten days in June 2016. These venues include the WMC itself, St. David’s Hall, the New Theatre and the Sherman Theatre.

The musical performances include artists from various walks of the musical life, including Charlotte Church in a contemporary version of The Last Mermaid between June 4th and 12th at the WMC; noted Northern Irish performer, Van Morrison in a show at the WMC with a special guest performance from Welsh opera singer, Bryn Terfel on June 7th; and Canadian singer-songwriter, Rufus Wainwright also playing at the WMC on June 5th.

You may also be interested to hear that MOBO award-winning British singer-songwriter, Laura Mvula will also be gracing the Millennium Centre stage, on 11th June, as part of this major new international festival. 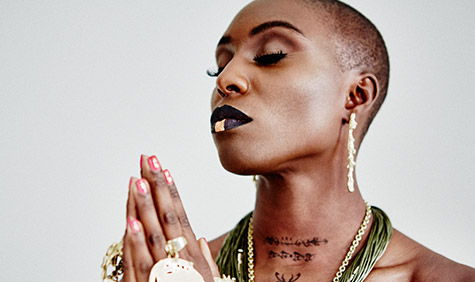 Laura Mvula will be performing as part of the inaugral Festival of Voice. Image source: WMC website.

At the New Theatre, Mercury Prize-winning artist, Anna Calvi will be performing a set list of her songs along with a Male Voice Choir on June 8th; and at St. David’s Hall on June 3rd, famed cult and underground artist, John Cale shall be performing songs from his latest album, M:FANS.

Elsewhere, a world premiere of a play by Patrick Jones called Before I Leave, which tells the story of the Cwm Taf Choir in Merthyr Tydfil and features new music written by the Manic Street Preachers, will be performed by Sherman Cymru at the Sherman Theatre on 27th May and will continue until June 11th.

The brand new Before I Leave. Image source: Festival of Voice website.

This contributor, I am happy to say, shall be personally reviewing three of these fantastic shows: Before I Leave, John Cale and Anna Calvi. I look forward to seeing them and I look forward even more to telling you all about them in the articles to come next week. In the meantime, if any of you should like to browse through the other shows available, you click here.

TheSprout has teamed up with Festival of Voice to provide young people in Cardiff with the chance to review many of the shows for free. See ‘Get Involved’ below.

Free and Cheap Things to do in Cardiff: 20-26 June