Gablafa Youth take the Community by storm with a spectacular Christmas party.

Gabalfa Christmas party was on 22nd December at Gabalfa Hyb. It had been planned for many weeks and was organised by Gabalfa Youth Club. We made a flyer to advertise the event and many of the people who were involved also performed on stage. The DJ’s included Ffion, Shane and Ethan.  Abbie and Terri-Mae both hosted the event and introduced the acts. They both performed as vocal artists and Terri-Mae danced. We played lots of games and were given chocolate for the prizes. After, we had chip butties. 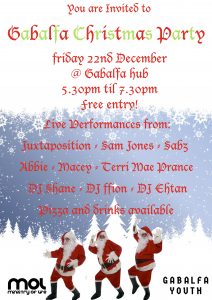 Riding off the back of the success of Cardiff Youth Council’s Folli Fest at Castle Coch, guest rap group ‘Juxtaposition’ made an appearance. This group, who comprise of Cardiff homegrown artists Jamie and Cameron, performed their album tracks:  Zonin Out, Better High, Live This Once and Poor Little Me. Spoken word artist ‘Sabz’ showcased one of her classic tracks, and last of all, female vocal artist Sam sang. This brought what was a truly spectacular Christmas party to a close. 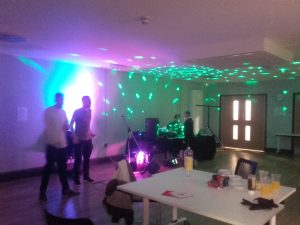 Everyone who took part will gain a certificate for their achievements which will be given out at the MoL Youth Awards 2018. The Gabalfa youth have got lots of ideas planned for 2018 so stay tuned for some great things. We meet in Gabalfa Hub on Tuesdays 4-6pm and on Fridays 5.30-7.30pm so please get in contact to learn about coming along.

Game On To End Youth Homelessness