This Russian fervour recently marked from the centenary of their revolution is turning many heads. Although 1917 has gone down in the books, 1953 will also remain a potent year for them, since their tyrannical leader Josef Stalin died unexpectedly.

Directed and co-written by Armando Iannucci (most famous for creating The Thick Of It and Veep) and based on the graphic novel of the same name, it is no surprise this film has had no plans to be screened in Russia (Read The Guardian’s telling article for more information).

Whilst the conflicting views over Stalin in his triumph in WWII remain, this would never outdo his diabolical reign of terror, with millions upon millions of Soviets being sent to the gulags and killed. Even the slightest doubt about your character could have you put on the fearsome list, for you to be never seen again. Stalin’s death so consumed the nation, they never even realised that on the same day, they had lost one of their great composers: Sergei Prokofiev. With a score by Christopher Williams, he does a super job in evoking the colours of Prokofiev and even more vividly with Shostakovich in its urgency and gripping tendencies. 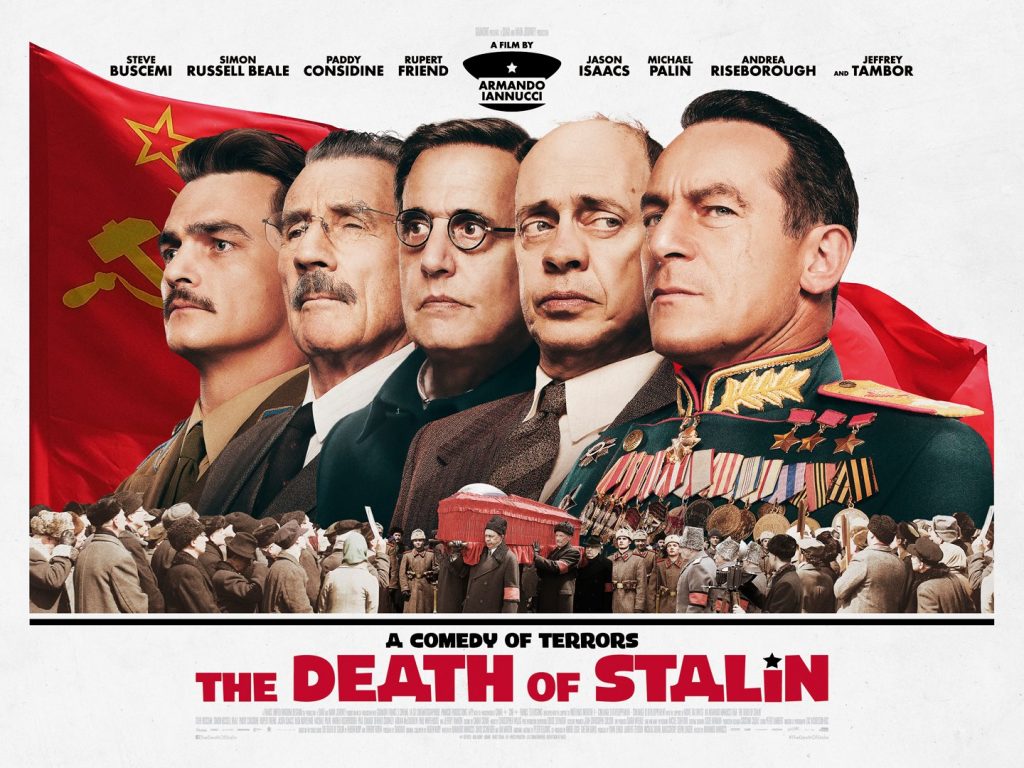 Stalin here is reduced to a waxwork cutout who just wants to hear Mozart on a newly recorded vinyl, before falling ill, having a slight recovery and then dying. The musicians who played live on radio then had to repeat the same concerto so it could be put on record for the leader. Whilst frantic Paddy Considine as Andreyev tries to keep everything together, he knows it would be his head if things don’t turn out well. Olga Kurylenko is the stubborn pianist Maria Yudina, who refuses to replay the piece for a man she despises so much. With half the audience gone, they manage to get the vinyl off to Stalin, including inside a barbed note from Maria…

There are many funny moments in this. It’s jarring to hear British and American voices come out of real life Russians. Somehow the film washes away this absurdity and makes the film more accessible, even if the country where it’s based is not finding the humour acceptable. The satire against those who rule us has always existed and should never be considered taboo. It can make for brilliant comedy.

The lunacy of the film can be summed up in a handful of scenes. One which lingers is the replacement conductor who arrives on stage in his dressing gown, having already settled down for the night before being escorted to the concert hall (the evening’s conductor having fainted). This can easily sum up the regime in its “Heard and not seen” mentality. If they can make the leader think they recorded the concerto without seeing who was in the concert hall (they even dragged people in off the streets) and what the conductor was wearing, then they can get away with it and for the meantime they appear to. 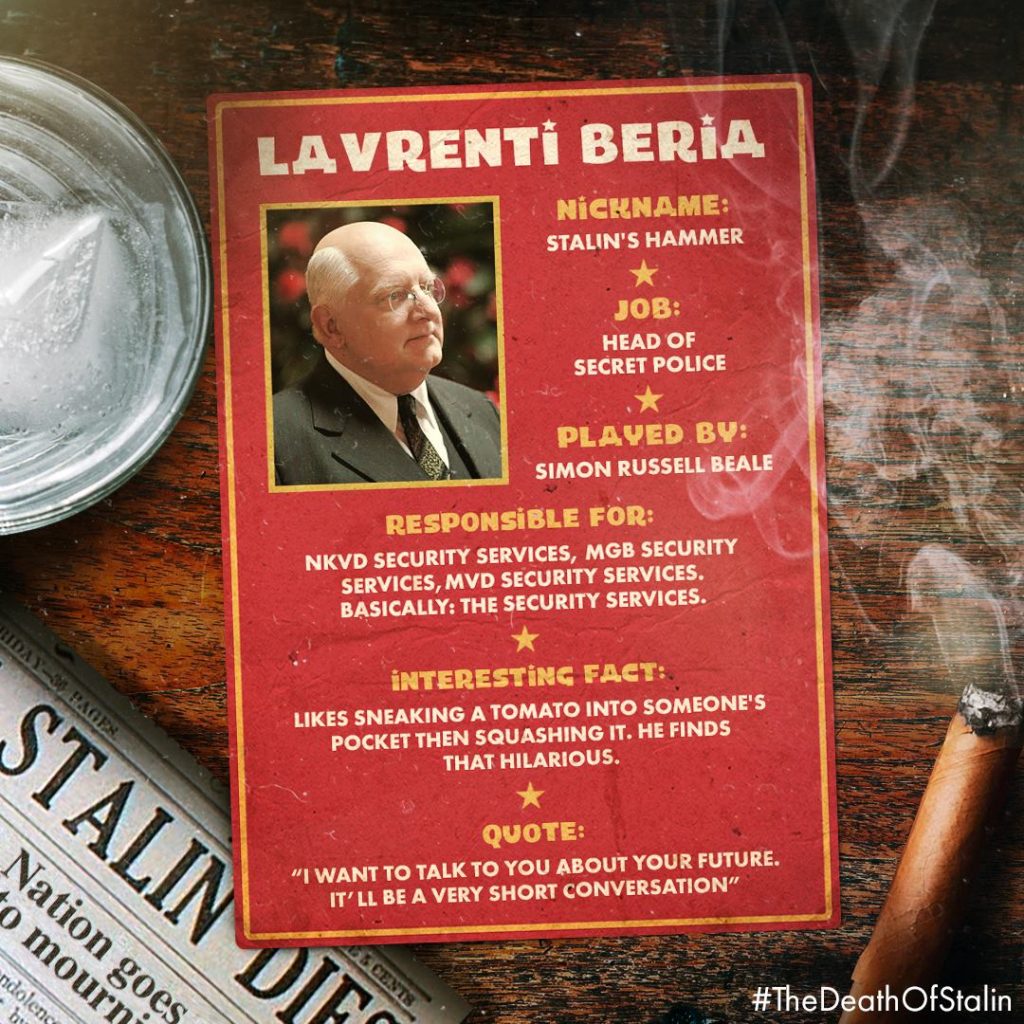 The majority of the film pulls the focus on Stalin’s right-hand men. It’s predictable in how the men react to each other. The plotting, threatening behaviour and stark manipulation is mostly executed by Lavrentiy Beria, here played brilliantly by Simon Russell Beale. The man is a true viper, setting people against one another, all for his own gain. His jabs, his sly remarks, easily provoke the people around him. It’s extremely satisfying to see a character get his comeuppance in such a startling way. All I’ll say here is that he got what he deserved.

The rest of the ensemble are also exemplary. The list of actors is surreal, but somehow work mightily well together. Steve Buscemi is Khrushchev, prior to becoming the new leader. Always the underdog, Buscemi is an oddity actor who also was plays to our feelings with his everyman persona. Jason Isaacs is Georgy Zhukov, the military man who acts like a tough Northern English fist to the proceedings. As Stalin’s daughter, Svetlana here by Andrea Riseborough is heartfelt in her way of dealing with the grief and the men surround her father’s corpse, quite literally. As his son Vasily, Rupert Friend is the unpredictable upstart, who thinks he might take over the country, all the while swigging booze and being an unpleasant figure lurking in the background. 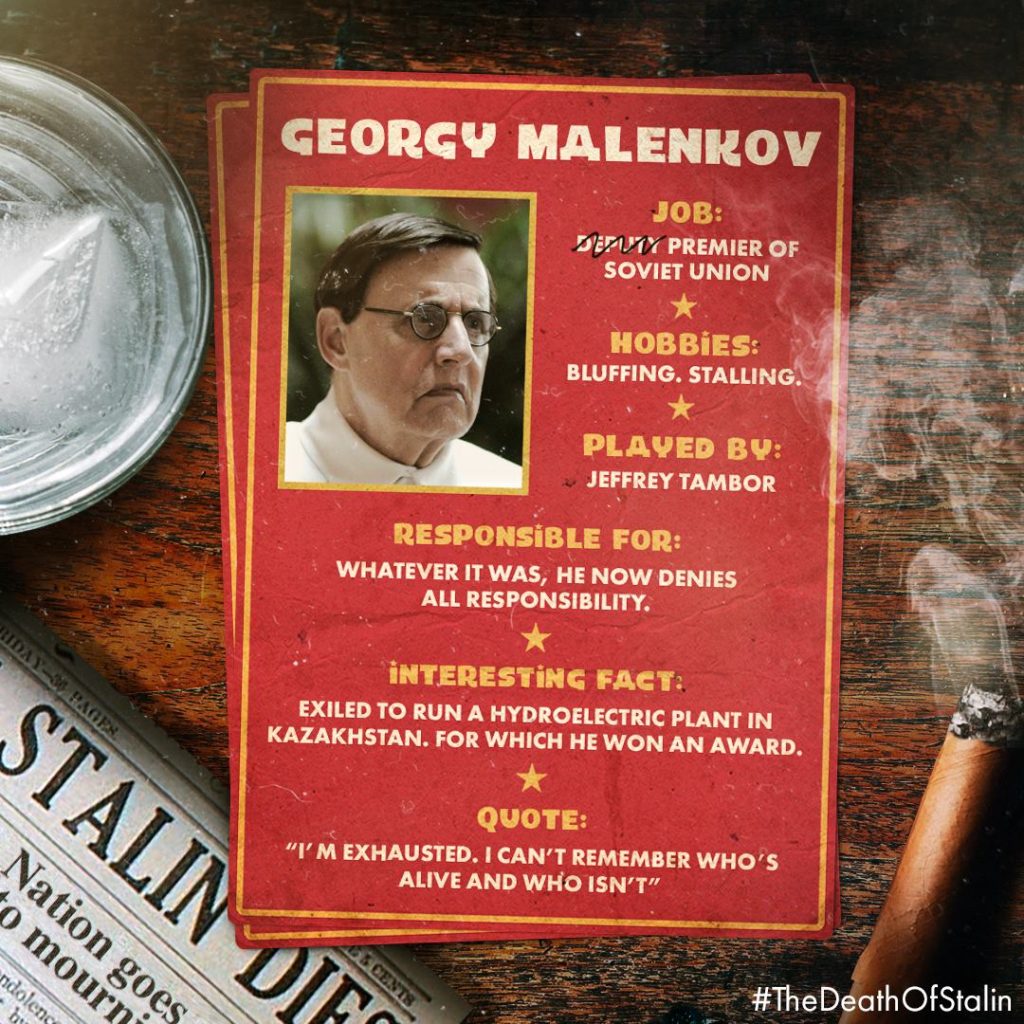 Stealing the film was Jeffrey Tambour, as Malenkov. With his dry, deadpan delivery and solemn facial phases, he never fails to delight and leave us in hysterics. His moving up in the world in politics is counterbalanced with his fraught insecurities that we can all relate to. Michael Palin as Molotov also has tragedy written on his face, since his wife was sent away, only for her to return via Beria, in a nasty exercise in manic manipulation. In another telling scene, Beria asks Molotov why his wife was sent away (it was understood he deified the state), he says his wife did wrong, only for her to come in from the other room to finally see her husband again. Molotov almost had the chop when a joke went wrong with Stalin, but was safe due to the quick death of the leader. Palin is a lesser dramatic component in this plot, but does play a vital part in the downfall of the ghastly Beria.

A quote I have come up with has felt like the predominant theme of this film:

The time and clothes of men may change, yet they will always kill one another for power.

A must see for all comrades.