It usually an emotional encounter when we see the final performance of a renowned actor. Harry Dean Stanton is no exception, as we get one last glimpse of this tightly concentrated artist, in all his reserved glory.

Well known for his work on David Lynch films, his defining role was in Paris, Texas. You always got what you saw with Stanton, a more real than real examination of the American underdog, quietly raging against society. It was hard enough to see his final television performance in Twin Peaks – The Return, so how could we bare to do it all over again?

Lucky is a film of little action, but rather a meditation of the day to day journey of its main figure, the perhaps not so fortunate namesake. Our first glimpses of Stanton are uncompromising shots of him getting out of bed, washing himself and most surprising of all, doing yoga. His body is a sight to behold, a symphony of wrinkles, veins and liver spots: a rare sight in American cinema. You almost feel a hashtag about older men’s bodies catching on. He potters about and meets locals in a quiet Arizona town, not doing a great deal, to be fair.

These twilight days for Lucky are also the same for Stanton, as dialogue at times blurs with reality, or the realism he looks in his crossword puzzle. His realisation of death and dying, is triggered from a trip to the doctor, being stubborn in his ways and not really wanting people to know he had a fall. Through this, the film harks back to Lynch’s The Straight Story, a quiet, American idyll about ageing and making wrongs right, before it’s too late. Although there is no driving force like that here, we do care for Lucky like we would a grandparent, even with the insufferable attitude. A scene with a fellow veteran (Lucky was a cook in the Navy) is a sobering reminder of warfare. This scene is perhaps best summed up by Leonard Bernstein in one of his recital songs: “They must die, you understand? ‘But they’re so pretty…I don’t understand’”

David Lynch gets a laughter fuelled stint as Howard, a man desperate to find his lost tortoise, called President Roosevelt. This is easily an extension of Gordon Cole, his character from Twin Peaks and it is a jarring sight to see Lynch in a full white suit. Some of the dialogue of his is rib tickling, as I predicted it would be and his speech to Lucky is a stern reminder about life, death and the universe. The film is very much Stanton’s, though Lynch being in front of the camera is always welcome in my eyes. 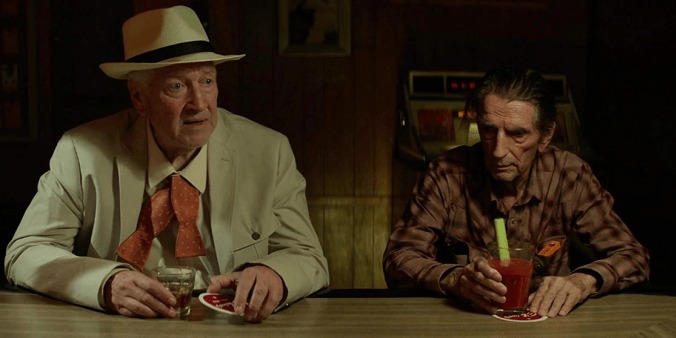 John Carroll Lynch (no relation) has created a stunning film, with some exquisite landscape shots, especially at nighttime when the sky seems to glow on the trail of the setting sun. Perhaps the most exposing shot was of Lucky singing (out of nowhere) a song in Spanish at a Mexican boy’s party he was invited to. If you don’t cry here in the film, then you may not at all.

As the film wraps up, we see Stanton take one final look at the camera and at us as an audience, for a lingering moment. He walks off into the harsh desert and leaves us all forever.

A wonderful swan song from a staggering character actor.