The Woman in Black

There aren’t many plays that are as impressive as The Woman in Black and when I say impressive I do of course mean in the manner in which the play is pulled off. After all a two-act play with only two primary actors (one of whom is constantly passing between different characters), dependent upon sound effects, lighting and other theatrical cues. A million different things can go wrong. But somehow here it doesn’t and the production team and the cast manage to bring it about perfectly.

The play is adapted from the book of the same name by Susan Hill, famous for her other ghost stories which include Dolly, The Travelling Bag and The Mist in the Mirror. Unlike the recent film adaptation by Hammer Horror starring Daniel Radcliffe, the play stays true to the format of the original story, albeit in a slightly tweaked format so as to make it acceptable for the theatre format. The play’s writer, the now deceased Stephen Mallatratt, even goes so far as to employ a Shakespearean appeal to the audience for them to employ their imagination:

“And so, imagine if you would, this stage an island, this aisle a causeway running like a ribbon between the gaunt grey house and the land.“

In the classic Gothic style the play evokes a haunting and chilling feel to its atmosphere through the use of appropriate lighting and setting. The play at first lulls us into a fall sense of security. Arthur Kipps, played here by David Acton, has decided to hire the Actor (played by Matthew Spencer of Nineteen Eighty-Four fame) to perform a version of his story of supernatural haunting for his friends and family. He does so in the belief that it will help him to exorcise the spirit of the Woman in Black. 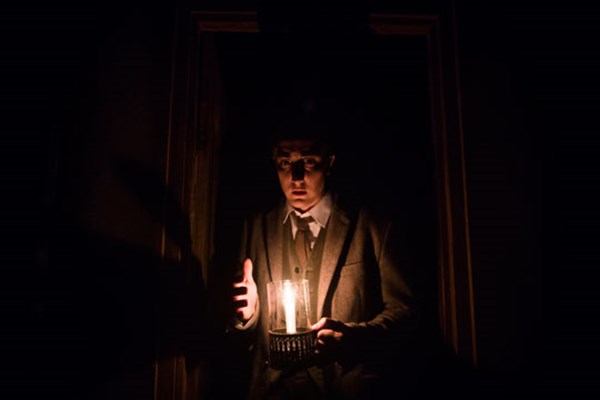 Surprisingly for a play that is infamous for its sudden “bangs and flashes” in a dark theatre space where every single sound is suspect, the first of many said bangs doesn’t take place until halfway through the first act. It jolts all in the theatre awake, with laughs of relief quickly accompanying the sudden flashes of surprise and terror, putting the entire audience on their guard for the rest of the performance.

Thankfully for the sake of the audience and their psychological welfare we are grateful that the format of tonight’s performance is that of a play within a play. For as soon as one is thrown into the deepest darkest pits of terror, we are drawn back out again into a calm familiarity of the interplay between Kipps and the Actor. One is calm and at ease again, before being once again plunged into the Gothic nightmare that is The Woman in Black.

So a word to the wise, if you are of a feeble disposition and are contemplating going to see The Woman in Black, which I highly recommend that you do, then my advice to you is that you make sure that you do not go alone. For there is a very good reason why The Woman in Black is the longest running play in the West End after Agatha Christie’s The Mousetrap. It is because it is a spine-chilling roller-coaster ride of thrills and chills that will leave you wanting more like any good ghost story should.

The Woman in Black‘s run at Cardiff’s New Theatre continues until Saturday 10th June 2017 – go get your tickets now.