In no way, shape or form would anyone consider farming as an “epic,” yet that’s what Giants Software seem to want you to believe every time you start up Farming Simulator.

As the music swells and the pre-rendered trailers demonstrate the plethora of vehicles that’ll be at your disposal as well as showing off their skills in a series of slow-motion shots, It’s hard not to feel a little bit of excitement for what will be my new life as a farmer.

While it’s not remotely as epic looking as its trailer, I was actually very impressed with just how realistic Farming Simulator is whilst being every bit as accessible as a video game should be.

To best describe this point, it helps to draw comparisons to other games such as Animal Crossing or the more recent Stardew Valley, two games that feature elements of farming and agriculture, however in their simplest forms.

Planting crops only requires plantings seeds in dirt and waiting a few days to reap the harvest, selling your produces is as simple as talking to an NPC and livestock only need to be fed and interacted with.

Farming Simulator sees this and laughs as it puts you to real work.

Before you even think about plantings seeds, the land needs to be cultivated and prepared in advance, This is a job for one of the game’s many licensed vehicles followed by another to actually sow the seeds.

Vehicles are expensive however as on top of standard fuel costs, you are charged per day for each vehicle and any repairs they may need.

Keeping in mind that seeds, provisions, worker’s wages, land rental and livestock are also rather costly and you’ll find that you’re losing a significant amount of money from the moment you start playing.

You can also forget just popping to the local store to sell your items, there are multiple stores and an in game economy, So it is up to you to do your research on which place will offer you the most for your harvest.

Sound daunting and stressful…? That’s because it is!

As someone with a full-time job and my own bills to pay, having the added worry of maintaining my virtual farm just wouldn’t have appealed to me had it not been for the game’s surprising amount of options.

Aside from the game’s obligatory difficulty levels, you can alter the settings to fit the game around your life and particular play style.

For example, you can determine just how much work your hire-able workers can do on your farm ranging from the task in front of them or in my case more complicated/expensive jobs such as refuelling and cleaning vehicles.

Other options allow you to decide how quickly your crops may wither, how often your vehicles will need cleaning, the game’s currency and even whether you prefer to start up your vehicles manually or not.

The best option, however, is the timescale.

This option allows you to decide how slowly or quickly the in-game days will progress.

Days can my last between minutes or hours dependent on your preferences but in my case I preferred to play in real-time, allowing me to complete some tasks with my breakfast then coming home from work to see the results.

It is this freedom that makes Farming Simulator a perfect match for Nintendo’s hybrid console, It allows for players to spend hours managing their farm from the comfort of their homes whilst giving others the option to micromanage their farm over small time periods.

Playing the game on handheld also has touchscreen menus which make sifting through menus, options and the in-game map a lot easier than trying to navigate with a control stick.

As well as that the game does run smoothly regardless of which mode you’re playing in. even if there are some textures unrealistically pop into existence when you approach them.

So considering the game’s impressive scale and player adaptability, one question still remains… why wasn’t I actually having any fun?

Well first off, the tutorial levels are just as stressful as the main game itself.

The first couple of levels teach you the basics of each vehicle type and what they’re used for.

I got through these segments unscathed but not without a frustrating amount of trial and error due to the game’s tendency to explain what you can do but not how to do it.

The worst case of this was with the “pigs”

You are given the simple task of buying pigs and delivering them to your farm, yet for some reason when I drove my trailer to the store and bought the animals, the game simply refused to acknowledge that I had actually completed the task, thus would not offer me instruction on what to do next.

I restarted multiple times and even tried driving the pigs to the farm to spur the game into working, however, I still had the same result. 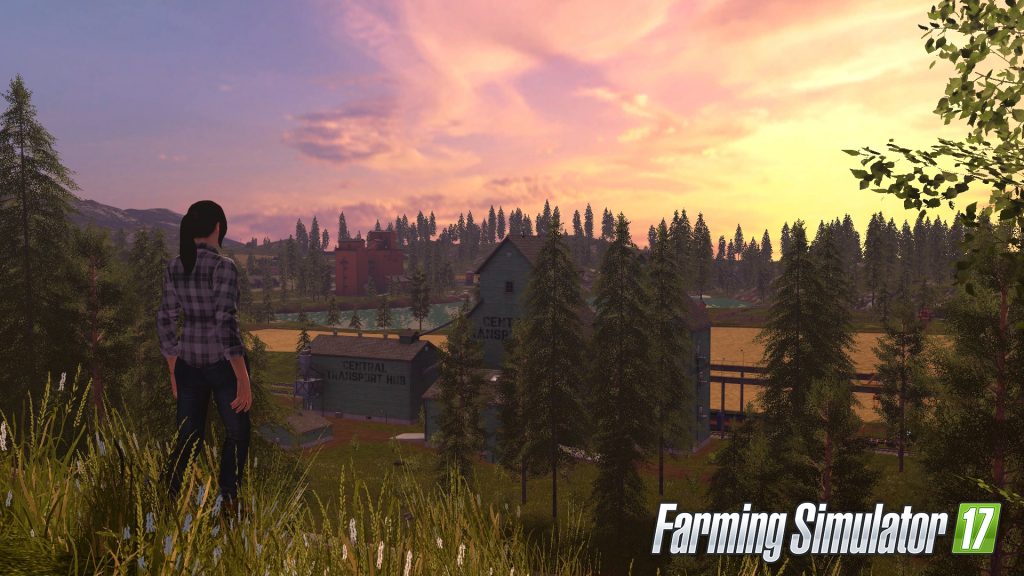 Frustrated I decided to just get on with the career mode which helpfully offers you the “guided tour” which showed me my farm, how to hire workers and where I’d sell my produce… and that’s it.

From that point onward, I was left to my own devices, I spent a couple of hours waiting for my workers to harvest the fields then slowly driving my produce to the store (because despite all options, making your character and vehicles move faster is not one) until I had completed my task.

However, instead of feeling satisfied, I was just left wondering; “What Now?”

I had no money for new fields or vehicles and no money to warrant buying livestock.

Admittedly speeding up the time to give myself something to do was a viable option but no part of me actually wanted to repeat the slow and ultimately tedious process all over again.

And it’s a game like this that just reminds me of how games like Animal Crossing and Stardew Valley provide an overall better experience despite their lack of realism.

Everything is quicker paced, better held together and there is always something to do and even on the off chance you feel yourself aimless, you can ultimately progress to the next day and continue from there.

Meanwhile, Farming Simulator gives you very little to do from the start, then expects you to just sit around and wait for something else to do.

Multiplayer could have made this game a bit more interesting, as you could double your profits and production. However, it is oddly absent from this version of the game, despite the Switch being proven to be capable of online cross play with the likes of Rocket League and Doom.

Farming is not for everyone and  I can appreciate just how far Giants Software have gone to try and bridge this gap by demonstrating that it can be fun.

At the same time, however, due to it’s tedious and often stressful game design, it seems that this game will seem to only appeal to those who actually have a form of interest in farming anyway.