Parasite made history this year, becoming the first foreign language film to win an Academy Award. The story of a poor family strategical getting themselves hired by an oblivious rich family combined well written comedy with a tragic story of class division and the harsh lives of the poor. 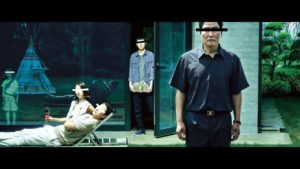 Needless to say, the film has given South Korean director Bong Joon-Ho quite a bit of international attention and many might be interested in seeing some of his other films several of which share core themes and concepts with Parasite. Bong has made 8 films in total but here are just 3 to get you started. 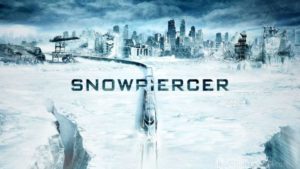 Of all of Bong Joon-Ho’s film, this is probably the easiest to get into for an English-speaking audience. It was a collaboration between South Korean and American film studios and features actors from both countries, the majority of whom speak in English. You’ll notice some well-known Hollywood actors in the film including Captain America himself Chris Evans.

In the near future, a project to stop global warming went horribly wrong, causing a new ice age too cold for any life the remainder of humanity are forced a live an a large ever running express train that runs across the entire world. The first-class passengers live in luxury while the oppressed lower class are forced to live in inhuman conditions. We follow Curtis (Evans) as he leads a rebellion up to the front of the train to overthrow the mysterious conductor. We can see Ho’s belief is class warfare was present even in his earlier films with the truly deplorable treatment of those in the slums.

The core ideas of the privileged not knowing or understanding that hardships of those lower than them are front and centre. The train presents a truly claustrophobic setting which adds to the tension of the situation but also serves as a metaphor for society at large, it’s cold, mechanical, narrow place where it’s hard to push to the front.

The film for the most part however is a well written actions movie with creative yet brutal fight scenes that take great advantage of the setting. The cast of characters are very likeable, a rag tag group of freedom fighters who play of each other well. One thing you’ll notice about Bong’s work however is that is not afraid to give characters a pretty unhappy end, and this film very much shows it.

This one is also available on Netflix, so it’ll be pretty easy to find. 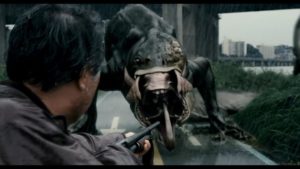 If you’re a fan of kaiju (giant monster) movies like Godzilla or Pacific Rim, this one is a must watch. After an American military base carelessly pours toxic chemicals into Seoul’s Han River, it mutates a local fish into a giant monster. As the creature rampages, it kidnaps the daughter of Park Gang-Du a local stall owner.

If that’s not enough, the monster is believed to be spreading a deadly virus, leading to the American military wishing to test a new chemical weapon: Agent Yellow to kill the creature. Gang-Du and his dysfunctional family must come together to save his daughter despite the government wanting them quarantined due to having contact with the virus.

While Snowpiercer, presenting the themes of class warfare, The Host shows themes of family. The Parks have a rocky relationship; with some of them just getting over personal failures however ultimately unite to save their loved one. The relationship feels believable, the way that real siblings and relatives act around each other and you truly come to route for them by the end of the picture.

The monster effects are spectacular. The creature, referred to only as Gwoumul (The Monster) is highly original animal, a giant fish creature running on two legs, a whip like tail and overlapping several jaws of teeth. Watching it rampage is the highlight of the feature. Underneath all this however is the social commentary about American military expansion and the incompetence of the South Korean government that enables it in a time of crisis. 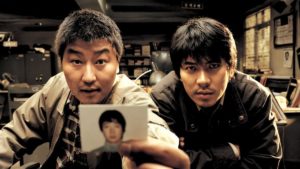 This film is based on the true story of the Hwaseong serial murders, often seen as the South Korean Equivalent of the Zodiac Killer murders both in terms of the brutality of the crimes as well as the mystery of who the killer was. It was only last year that they actually found the murderer Lee Choon-jae after 20 years since the killings.

The film presents a city police officer brought to a small country town to investigate the series of murders of young women. It’s unfortunately not that easy, the countryside has outdated methods with evidence collection mishandled and forensics analysis non-existent. The police also are woefully unprepared for such a serious case and resort to police brutality in order to squeeze information out of suspects.

It’s easy to see them police force as incompetent but the film does a great job of explaining how harsh their conditions where and just how unexpected this case was. Korea had never seen murders like these before and the film goes to lengths to show just how shaken everyone involved becomes. The film builds a constant tone of dread and frustration, never letting you forget that a killer is on the loose which only gets worse with every suspect proven false. It’s a slow burn but stick with it and you get a bleak yet enduring detective story, a great start of Bong Joon-Ho’s career.

If you enjoyed Parasite, these are worth a look

Trains, Monster and Murder. From the mind that made Parasite.

Will Varley Gig in Photos

Royal Composer’s First Requiem to Have Its Welsh Premiere