There is always an acceptance that there will be a disconnect between myself and men in dinner suits with moustaches that you can see through. As I entered the red ridden room, I was greeted with a name tag and a Star Trek translation device as some of the speech would be in Welsh. I got a glass of water as I didn’t want to accidentally pay for something and sat down. Chicken liver spread on tiny toast came around, it tasted like quavers so I ate five and tried to mingle to minimal success. I seem to identify with the server and not the served, the man holding braised beef on spoons was called Ethan.

I took my seat, sipping from my newly grabbed complimentary Coca-Cola with tote bag flopped on a chair. The main issue that we need to face is a loss of empathy and honesty in politics but some of my fears would be put to rest. 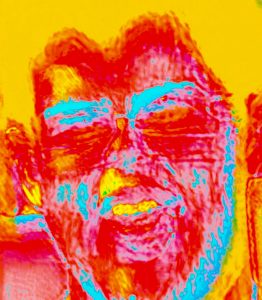 As I cleaned my glasses while trying to balance the translator around my neck Huw Thomas, the new leader of Cardiff Council, appeared with a wry grin and an infectious enthusiasm. He spoke with a confident and a self aware nature, he had a grasp on his surprising win but seemed to understand the power of his position.

He commented on the fear of culture death that has swarmed Cardiff recently, his passionate stance on the arts and culture but seemed to lack ways in which to turn these feelings into reality. I fear that his varied points of passion may lack a focus, can he cover it all?

My one major concern was if I was going to see a political parrot, repeating the most common points heard from the public. There may have been moments of this; from jokes about riding his bike, to remarks about housing. It is difficult to determine passive passion and passion with purpose.

After his admittedly long speech, the Q and A session began. I had my main question written on my hand in biro.

Q and A Session

Q: What are you plans in terms of supporting Cardiff’s LGBQT+ community throughout the year?

A: Equality, diversity, respect and tolerance are fundamental values to have as Cardiffians. Sadly, these may not be values that are integrated as much as we would want them to be. There is a lack of respect for different religions, genders and sexualities and we need to recognise that. We need to face up to prejudice and call it what it is, unacceptable. We do not have specific plans at the moment but I am open to talking to people within the community about these issues.

This is always my fear, there is a focus on gay rights when it is lucrative but it fades away afterwards. I believe the openness he presents to be genuine but I fear that this will be another issue that disappears from view.
I was burning to ask a second question, not because of my enthusiasm but the complementary coke was twisting my bladder in knots. I wanted to ask him more about his stance on the arts and that’s exactly what I did.

Q: Cardiff is based on the arts, I have seen a lowering in funding in these areas. Is it a priority of yours to give more chances for young people who are creative?

A: Yes, is the answer I must give. Everyone has a right to impact culture whatever your background. We need to allow people who do not get the chance, the opportunity to experience our culture. We should allow everyone to flourish; artists, musicians or scientists. We want to see everybody in Cardiff get the opportunity to succeed.

He has a strong belief in exploring new grounds and wants to see Cardiff develop, he believes that ambition is vital but we must stay humble in our pursuits. I only hope this to be his direction.

I was able to talk to Edward Jones who plays a large part in the youth council. He seemed to have many of my main concerns. These were his feelings on the event.

“I welcome lots of what they bring forward but I do worry whether all of it will be achieved. It is very ambitious. I am worried because he didn’t mention mental health, which is a priority. I am excited about working with the council on this and hope I get many chances to do so”

I stayed behind after to gain a real understanding of who he was and why he has the career he has. I asked him to give me a couple of sentences about himself and his feelings.

“ I want to have made a positive difference on this world. Politics can make the difference. I’m passionate about giving people the best chance. Helping people who can’t help themselves. Being a councillor allows me the chance to do this”

I believe that you can judge a person on their favourite album so I asked; he paused and nodded his head in fear that he was cheating by saying “Oasis – Live at Wembley”, fitting that he would choose a band with a nostalgic feeling but with a strong structure as this is what his political personality seems to be.

As I left for the train station, he went by on his pushbike and I thought to myself “he does ride a bike but does he actually care about housing?”

#ICYMI: The best Sprout articles you missed in 2018