Reaching the halfway point through this year’s Experimentica, I realise just how much the festival has inspired me. They can certainly expect a few more applications from me next year!

Beginning the day was What it is Not, a selection of weird and vexing film work from around the world. None of these are new work, perhaps the festival would like to commission new work for 2018? Death Mask 2: The Scent by Ed Atkins was a well crafted, strikingly textured film, highlights including paint falling on a cantaloupe melon and a self standing calculator. Mark Leckey and his Concrete Vache is an infuriating art film, automated voices and random imagery. It felt very Dada (even sauerkraut is mentioned) and does have some witty moment.

Mark Aerial Walker’s Phantom Avantgarde tackles the physical aspect of film-making and how to recreate what has been filmed with cardboard cutouts. This is a fantastic idea and friends spoke highly of this film. Lauren Prouvost’s piece The Artist is a bizarre experience where you feel the person in question is going a bit insane, all the while showing us her art work. Ending the set was Conroy Ramon Requilman by David Raymond. The work tries to be all meta, but through a poor execution, we are listening to Requilman at home on record, rather than live, and then the reveal that we were all watching on a computer is a nice trick, but little else.

Following on from this, we had a brief stint in Media Point for Rhiannon White and the Common Wealth Class for The Elephant in the Room. Part warmup, part performance and part reading, the mixture was a highly stimulating and thought provoking presentation on how the middle class’ claim to own the arts. No doubt, this was is a touchy subject…after all couldn’t the middle class simply put blame on the upper class for similar feelings of blame and insecurity?

The warm up was a classic: The Sun Shines On… and whatever is proposed (such as who is ginger or defines themselves as working class) then run around to room of la musical chairs. This got things of to an exciting start (I spoke of those who had shaved in the last three days) and we we’re then treated to testimonies delivered by two young actors. The words were mostly rich in the doubt that they didn’t feel as if the arts was for them. One story which rang true was an opera lover who had never been to actually go and see one. As an avid opera follower, I always take someone new each season, just so they can experience for themselves the glory of the art form. Opera is for everyone and no one should be feel intimidated into not going. 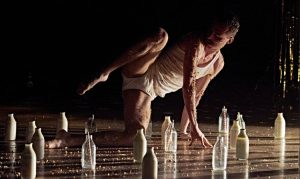 The class struggles expressed here are not only confused to the arts. There are so very many class issues seen today; I should point out that the middle classes are not to blame for everything. I observed a friend during the show, who appeared in a state of humoured ecstasy, the words ringing true to her about the snobby nature of theatre, later on encouraging applause from the audience when certain statement hit home. We need to bridge the gap between us all, not just in the arts but life itself.

After that bombshell, Gareth Chambers quenched our thirst, in his piece Llaeth (or Milk in English). Delving into the relationship between mother and child, the work is a hair raising dance featuring Cheerios, a disco ball and said milk. The score is an extended disco number pulled to its extremities as Gareth revealed himself from the cereal mound and relentlessly collapses back on to it. He crawls around the space in elegant and disbursed choreography, ending into a jarring dance number, as the disco track is snapped back into normal speed. The addition of blonde wig drags the work into absurdity, though it masks  his face in mostly terrifying moments. The child form here is a sort of parasite, sucking through elongated straws to obtain the life drink, as if the studio itself is the mother and the milk bottles are her teats.

Ending the halfway day was Kung Fu a project by both Yoanna Bilkman and Dan Robert Lahiani. This marvellous fusion of dance, Kung Fu, photography, home video and live editing may sound daunting, but is a brief and transfixing experience. Yoanna is a terrific dancer, with keen focus on her movement and has a grip on us all in every step she executes. Dan observes her, scouting every move, as old footage of Yoanna as a child is seen at at martial arts competition. Looking like a young Meridith Monk (pony tails and all), she’s wins 1st place, such is her power even then as an artist and athlete. In one hilarious and funky moment, two frames from her victory jump are remixed into a silly dance that she creates live in front of us. This is a special piece and a true highlight of the festival.

When is hidden language discovered once more?

What it is Not: Artist Films: 2 stars
The Elephant in the Room: 4 stars
Llaeth: 4 stars
Kung Fu: 5 stars