Who first springs to mind when you hear the word “Godfather”; Michael Corleone, an estranged relative, or your favourite family friend? Well, Richard Cowie might now be the answer on many people’s lips. Best known by the stage name Wiley (or Wiley Kat to real connoisseurs of UK garage), the early pioneer of London’s underground hip hop scene has seen a career span over a decade and across a number of styles.

Despite his incredible stylistic versatility as a rapper, Wiley’s name has become synonymous with the grime movement where he is undisputed as a crucial player in its birth, alongside the prolific names of Dizzee, Kano and Lethal B. Now releasing his eleventh studio album, Godfather, Wiley certainly has claim to the title.

From the humble, home-produced eskibeat sounds made popular on pirate radio, Wiley grew a unique style which steered garage from its house roots through the electro genre and into the origins of raw, 140bpm grime we recognise today. 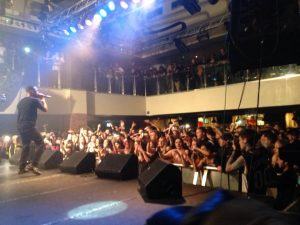 Wiley founded rap collective Roll Deep in the early 2000s as a platform to experiment with and grow this new style. Along with BBK, to which Wiley is naturally affiliated, Roll Deep is firmly ingrained in grime’s history and its success has been incredibly far-reaching. The roster of current and former members still reads like a who’s who of UK rap, with many names regularly charting and breaking into the mainstream.

Wiley headlining the Cardiff SU one year on from receiving NME’s Outstanding Contribution to Music award is testament to how grime has embedded into popular consciousness. With the advent of social media, it has become much easier for independent artists to circulate their work to a new audience. Shut Up and Shutdown are two prominent examples of underground music being opened up to the masses in a cultural shift. Not everyone is happy about grime’s newfound popularity, with some commentators suggesting underground music is being suffocated or sold-out for the popular success of a few. Without digging too deeply into music politics, I feel that Wiley’s consistent and popular success have never divorced him from the genre he created.

Following on from Astroid Boys and President T’s enthusiastic support, Wiley wasted no time with familiarities and leapt onstage to Back with a Banger. His performance was alive and energetic. Wiley was unquestionably man of the hour, but he stayed pleasantly grounded; with each track came a shout out to loyal DJs and stalwarts of the rap game. Nonetheless, Wiley was against the clock and music was top of the night’s agenda. His set list seemed very fluid and improvised, often consulting with his crew and changing tracks midway through. As the evening closed, he seemed endlessly distracted by the time, and kept stopping to calculate how many tracks he could fit in before the night ended. This detracted from the performance and could have been mistaken for someone reluctantly fulfilling an obligation rather than hyping up a new album. At worst, Wiley was counting down the minutes left before he could leave the venue and crowd behind him.

I understand the unforgiving demands of life on the road will have blunted the novelty after 11 years at the top of your craft, but September’s frustratingly short appearance at Inside Out Festival left Cardiff fans hoping for more. Despite a great show, Wiley was never really present or engaged with the crowd the way grime fans have become accustomed to. But then again, who knows this better than the man who wrote:

“When it’s straight from the heart you can’t go wrong”.