Experimentica finally returns for its 16th festival at Chapter Arts Centre and the theme this time round is Hidden Language. Things have changed a bit with no festival brochure and all events carry a Pay What You Feel stance, rather than a pre paid booking system. No doubts the latter will break down theatrical barriers, though it’s a pain for critics to have to have a ticket for every desired event, as opposed to the well missed festival pass.

For the few who ventured to see the first piece: Round and Round and Round, Sheree Naqvi presented a startling work of performance art. The small but keen spectators brushed past ballet recitals to make it to Peilot, a small but warm space rarely used for public performance at Chapter. A circle of chairs was half full as concerned audience members sat by walls, unclear of the following proceedings. Sheree, who appeared in a state of meditation, then entered the space, let down her hair and begin to crawl around brushing our shoes with said hair. 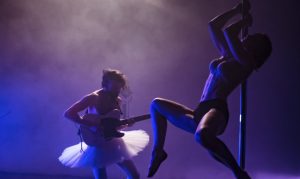 At first, the experience is beyond intimate, yet as she did her rounds, we become more clear in our perception of what was going on. We played with her, I took my shoes off and she brushed both my feet and pair of shoes, I sat on the floor and she still aimed for my feet and had there been more time I would have sprawled out in the floor. Other patrons felt alarmed and also curious to see how she would handle a change in the environment.

Her hair along is a thing of wonder…how it veils her head like black saturn. The statement reflects women’s roles and the expectation of those roles. At times it had an intense religious quality, as of we were having our feet cleaned by Mary Magdalene, (or for opera fans out there) as if having Kundry from Parsifal at our feet. A truly bold start to the festival and one that won’t be forgotten anytime soon.

Moving on swiftly to the next show, a returned ticket from the box office allowed me to see BADASS GRAMMAR, an odd show involving pole dancing and an electric guitar. Performed by Rose Biggin and Keir Cooper, the piece lagged at times, even if the athleticism and musicianship of the pair can’t be shot down. Various stories about being a Beatles fan, Schöodinger’s cat and a surreal scene with the pole and guitar talking leaves eyes glazes and some witty observations considered. I think the show requires some trimming down.

To end the night was GETINTHEBACKOFTHEVAN with their piece FRANKENSHOW. The theatre at Chapter was plastered with ladders, toys cameras and other bric a brac in an hour of bafflement and hilarity. An acquired taste for sure, the night was spent really just being a child again and having a good times with toys. What’s wrong with that? The scenes with the recorder alien plushy, mirroring Trump speeches and frequently running off when trying to be recorded into we’re highlights. The toy is a must buy and the moments spent with it are some of the funniest I’ve had for some time. The rest of the playtime time may drag, but it felt like a fair amount of effort had gone into what might not be perceived as such. Nice effort.