We come to the end of Cardiff Dance Festival for this year. This extravagant festival lasting a week and a half, has left its mark on the Cardiff scene and it only their second outing. So how did it all wrap up then?

The work of Jo Fong is always a treat. Here, in the largest piece from the entire festival, was a gathering of local artists, dancers and movers. Some familiar faces included Gareth Clarke, Matteo Marfoglia and Eddie Ladd, others I’ve seen around though names remained a mystery. The near-psychedelic imagery of bodies relentlessly in motion, twirling around the space in an ongoing flux, was the vision we had for some time. I felt a knee-jerk reaction that you could almost join in, falling into the work and you’d be welcome with open arms (maybe?)

The blurb for Ways of Being Together was as such:

This is a choreography for many people

It’s not a dance

The act of bringing people together

The art of bringing people together

With this in mind, it helped understand the piece better. No one was more of a dancer than anyone else in this work (even the trained professionals). The work had the appearance of a formless gargantuan performance that would last for three hours. A young conductor demonstrated some of his craft to Mahler (in silence), a mother and child showed off their own lovely duets, everyone rocking out in their own crazy way in another moment and a guitar player spoke of how much being in a band meant to him, only to then play the first part of Smells Like Teen Spirit. This and other moments were tantamount to the talented offerings from various company members. A signer who signed to all the sound taking place during her meta section was also a highlight. 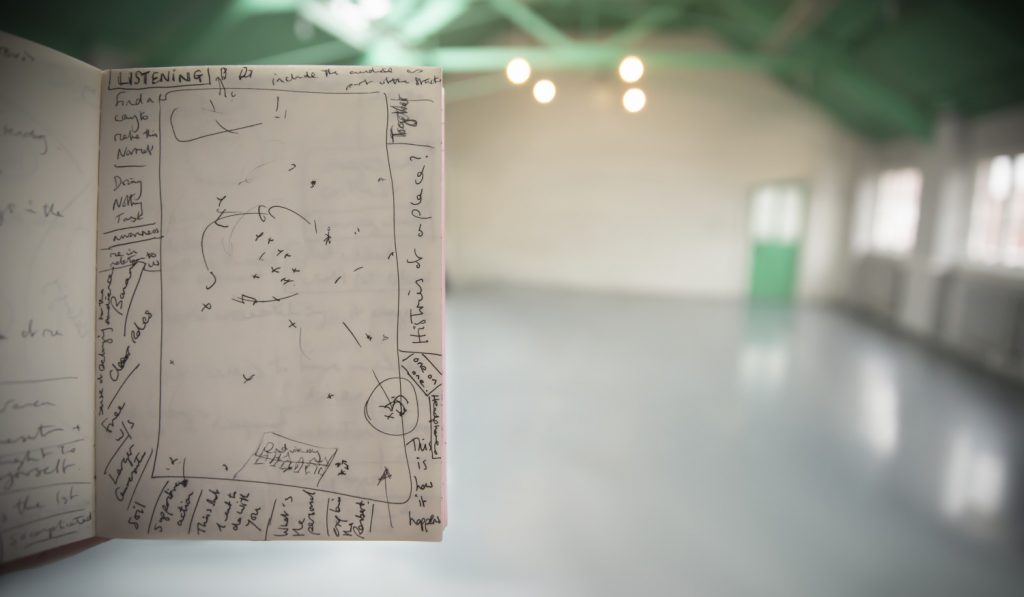 At times jarring, in other moments functioning like a well-oiled machine, Ways of Being Together had been promised as a special event and it was. The halfway point was made apparent by the end of the show and the sharing of a meal of curried chickpeas and flatbread. I quickly realised that THIS was the true way of being together. I munched on food, spoke with a few of the artists and found the relaxed atmosphere calming after the performance. It was the perfect way to wrap up the festival.

Jo’s swinging moves to Every Breath You Take is another moment, which will stay in our memories, as the child from before began to circle the space in his little car. The joy of movement was alive in Ways of Being Together. I’ve yet to feel and experience anything else like it. I’d be keen to know what Jo is up to next and how I could be a part of it.

Review: Trainspotting with the Cardiff Players