CDF would be interrupted by Basement 21 on many occasions throughout the second Friday of the festival. Granted, most people would not flock to see them dance at Cardiff Market for 8:30am (I’m very much a night owl), a decent audience formed at the ATRiuM, University of South Wales for noon. I scoffed at the plaque saying the uni had been opened last year (when it has been open for over ten years, being University of Glamorgan for most of this time) and admired the large painted canvas clinging the floor.

Things kicked off outside, with students using the white block benches and in formation, sat and turned towards other dancers in a half decent work. Heading indoors, we saw the odd musician playing crazy improv and the dancers used the brilliant spiral staircase the uni is famous for (see my video work using said staircase here). Each dancer formed a poetic unity with each other and brilliantly ascended all four floors in a systematic, visual splendour. Work after this was much more intimate with a few artists spread across the ground floor, as awkward students tried to pass them. These movements were much more subtle and not wanting to be late for the Fidelio Trio (review on the way), I sadly departed too soon.

Popping back later, their next Interruption was on the fifth floor of Cardiff Central Library. Whilst this is not a great space for vertigo sufferers (like myself), the dancers eventually made their way up to the top floor, joined by the musicians. If was both fascinating and hilarious to see the reactions of unsuspecting visitors who had no idea what was going on. Those using computers had the sight of invading females dancers caressing the space around them, making their own bodies meet the shape of the tables, book shelves and even iPad holders. It felt very Zen and half of these visitors met the work with philistine like indifference. The music here was more brittle and dense and carried on as the dancers descend in a lift and continued to move and form underneath the ugly, metal sculpture outside the library. I missed their last piece back at the market and I would have liked to have seen what Marega Palser and Gareth Chambers had done on the day.

More Interruptions to our day, I say. 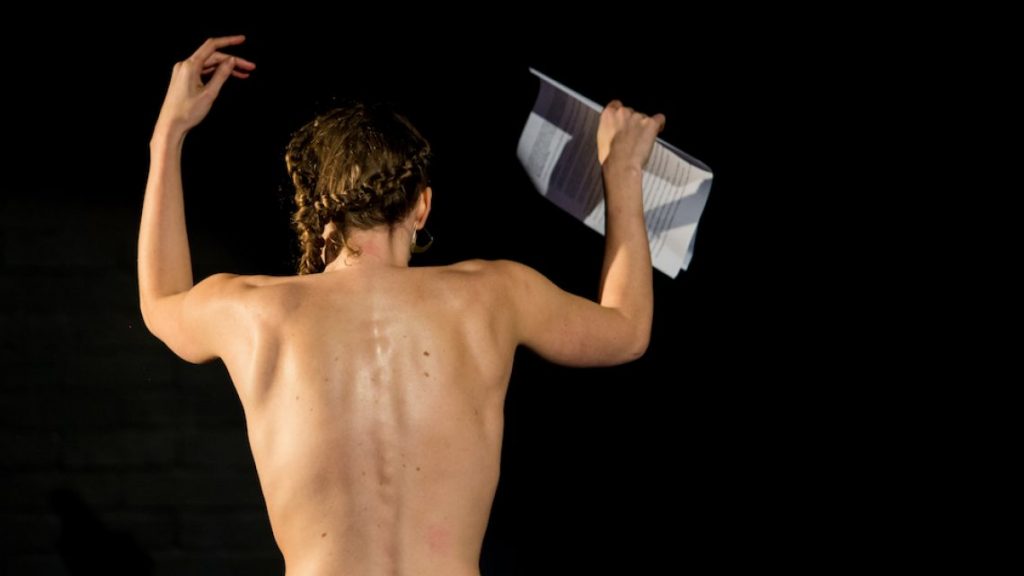 The next night, this exhausted critic, was delighted to reach the penultimate work of the festival. Going into Hardy Animal by Laura Dannequin, I had no context for what it was about nor did I read any blurbs. Presented to us was a touching and funny show about pain and how it can affect your artistic and personal life. Laura expressed the chronic back pain she has been afflicted with and for some time has had to comprise her practice.

Yet, Hardy Animal is two fingers up to pain and Laura tackles the subject in such an accessible way, it banishes away any pity or sympathies the audience might channel to her. We see her, standing still in the middle of the space, with a pre-recorded monologue, all meta and witty, making us feel at ease with the piece. She then turns from us, removes her top and bra and addresses us through a mic, this being the bulk of the work. Turmoil is expressed her, the false hope she has had, the con-artists who thought they can make her better and the dread of not being able to perform again tinged her every word.

Later, it becomes a lecture, as she speaks more of experts who even today, don’t have all the answers on pain. Her right arm begins to move of its own accord, whilst talking about the mind and body in lack of connectivity. Yet will she dance for us? She does…and it’s a very moving moment, made all the more so by playing Bach. Afterwards, in a post-show talk, I was intrigued by the con men who thought they could heal her. Laura pointed that when you are in so much intense pain, you go to them purely because you are so desperate in that moment to feel better. I nodded in agreement.

It’s a personal story for me as well, since my mother has in the past suffered with awful back problems and more seem to be diagnosed even today. The talking of pain in Hardy Animal makes her the title sake of the show, but for all of us as well for considering how much pain we can take and especially how we handle others who are in pain.

*Our extended reviews for CDF are for a few reasons. Along with the breadth of work seen, I’ve had to put into review form (I do believe I am the only critic who has reviewed every evening show at CDF this year) and also a change in Editor at theSprout.*

The Killing of a Sacred Deer