Some work at CDF has admittedly been of a more stimulating nature than other pieces. Ths review shall cover some of the work I found to be the best part of the festival.

maribé – sors de se corps came from Quebec to perform in Cardiff. BESIDE is the final piece in a three-part series. Sadly, the time of their workshop (the piece is not complete and is prone to change I should add) was changed from 8pm to 4pm. Due to this, more people would have no doubt seen their incredible work, though young dancers were present and it did have a nice intimate feel to it.

The utilising of radio performance is an ingenious idea and is something I just might steal for my own practice.

All the artists were adjourned with large headphones, each connected digitally to the local radio. Each of them acted out what they heard, be it song lyrics, adverts, discussion or interviews. Noticeable topics included the current climate in Zimbabwe and the legislation of gay marriage in Australia (about time as well). These random encounters with local radio also proved a barrier for these French Canadian artists, as they struggled with Welsh place names and local banter that only we in Cardiff would get. The gaps in their repetitions help prove that it’s really hard work to both listen and recite at the same time. Hats off to them for this. 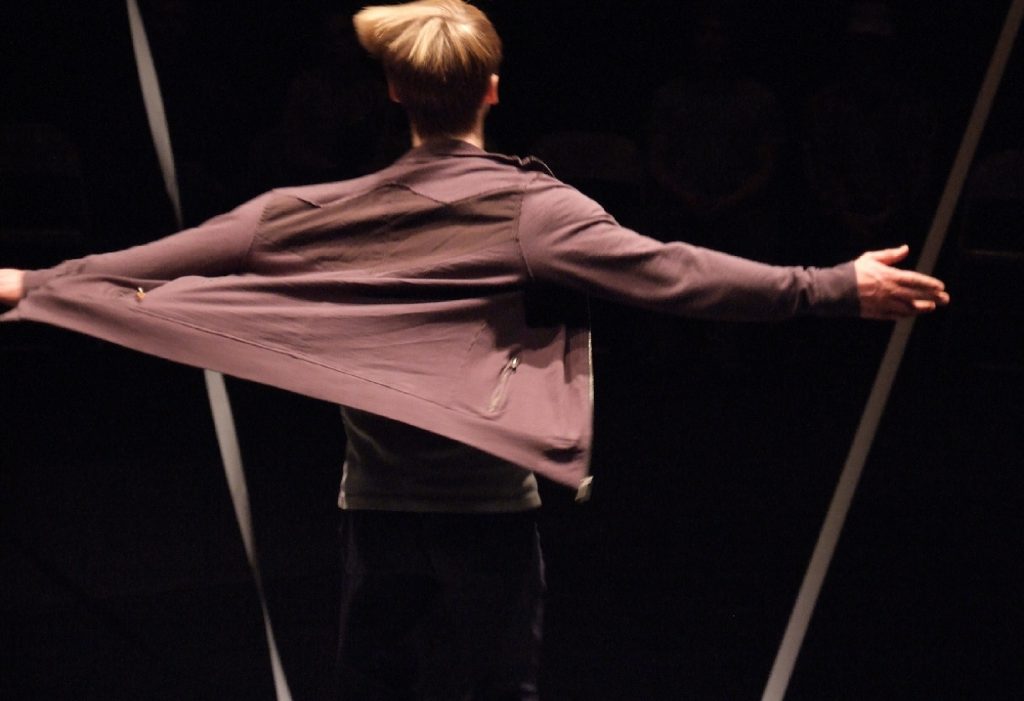 The work was electric. If a little overdone, it has a snappy quality transforming the banal pop songs and dull travel reports into sensational works of art. The frantic, pressurised movement along with the speech is at times chilling and in other moments hilarious. One dancer, appearing to have a panic attack during her solo, as her hands are covered with finger lights was one highlight of many. Another with a head torch began to speak furiously over political commentary, as he thrust his hands around the table, robotic like in his head flicks and sensory tics. To see the same females dancer recoiled in submission underneath the table from the verbal abuse from a male dancer was another powerful moment.

The Overture to The Barber of Seville went perfectly to the clean up of the space, even though it was not intended. This is a work which could go on for much longer and the art of chance remains intriguing, with the limitless possibility that the airways can provide.

Another grand work was Not About Everything created by Daniel Linehan. Performed at the Dance  Studio, we sat in a circle of fold up chairs awaiting his arrival. Daniel comes into the space, moves towards the centre and begins to spin… a lot.

It’s a rare occurrence at the theatre when you fear for the health of an artist during a performance. Staggeringly, he has done this piece for ten years and found the dizziness goes whilst rehearsing the work. He repeats the phrase “This is not about everything” and a flurry of other statements relentlessly. Clearly in denial, it IS about the things he says. His body in motion soon become hypnotic. He even advises that if we felt unwell to avert our gaze at him, to relieve the nausea.

He even pulls out a few surprises: a reading of an actual letter addressed to himself, alarming a random audience member by saying their name out loud (he has asked for a name prior to the show) and always having a petition to send off for a good cause. I wasted no time, got up and took the letter from him, missing it the first rotation and grabbing it in the second. See my tweet below to see his letter go on its amazing journey from Wales to Australia:

This incredibly stimulating work feels like the moving, choreographed ballad [not ballet] of a gay dancer who is beyond determined to see things through. His recorded voice (of a younger self) haunts the space and create Reich like loops in many bursts of minimalism in the piece. You half expected Phillip Glass to come on. Yet, his declarations of “Stay the course, stay the course!” and “Stay thin, stay thin” speak for themselves.

In a post-show talk, a note was made of how Not About Everything has similar qualities with Profundus, a work created by Nationa Dance Company Wales earlier this year. Each dancer would say “It’s not about…” and then strike a pose related to the chosen word. Was it inspired by Not About Everything, which is now ten years old as a piece? Daniel also has a calm and charing demeanour, very pleasant in his answers to intense post-show questions.

We’d sure like to see more of his work and even this piece back in Cardiff.