Young people from Wales up for UK Royal Awards 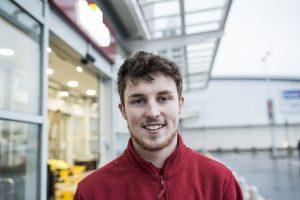 Adrian, 20, lived with his family to the age of two. When his parents divorced and the family broke up, he moved away with his mum but difficult circumstances led to him being taken into care. This marked the start of a chaotic and unstable home life and Adrian spent his childhood moving around foster care. Involved with drugs and experiencing depression, he decided to return to Wales. He was put into a supported hostel, where he found The Prince’s Trust’s Team programme.
He made friends and was able to be himself. Every day brought a change for the better in Adrian and he was determined not to let his past affect his future. He has permanent employment at Wilkinson’s and his own flat. His long term goal is to have a house with his girlfriend and a family of his own.
He says, “The Prince’s Trust has had an overwhelming effect on my life. My Team Leader gave me the support that I had needed for so long, they saved me. They helped me believe that there was still hope for things to get better and they surely did.”
Ian Stuart, CEO, HSBC UK, “We are the proud sponsors of the Breakthrough Award. Adrian has done exceptionally well in developing new skills with the help of The Prince’s Trust. We wish him all the best on the 15th March!”
Alisha Mardon – nominated for the HomeSense Young Achiever Award 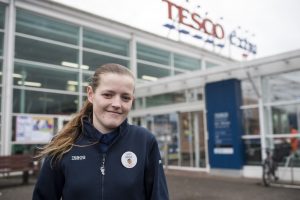 Alisha, 24, experienced a difficult childhood which led to the breakdown of relationships and behavioral issues both in and out of school. She was deliberately confrontational in lessons, started to truant regularly, and left without any qualifications. Then Alicia found herself homeless and was forced to move into a hostel. She was anxious, depressed and lacking self-esteem. By the age of 23, she had been unemployed for seven years.
Then she joined The Prince’s Trust Get into Retail programme, in partnership with Tesco. With a can-do attitude, she was extremely helpful and respectful to customers and colleagues. The transformation was stark. On completion of the course, Tesco offered Alisha a contract. Alisha has turned her life around completely. She has a routine and a salary which has enabled her to move into a flat.
She says, “I am extremely grateful to The Prince’s Trust for believing in me and for giving me that chance when no one else would. You made me believe in myself and I no longer feel worthless.”
Thabo Khumalo – nominated for the Delta Airlines Rising Star award. 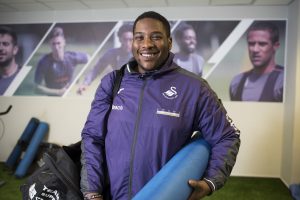 Thabo grew up hanging about the streets. His only aim was to remain out of trouble and get home safely. He left school without any qualifications and found himself unintentionally involved with London gangs. When his best friend was brutally stabbed Thabo knew he had to make a change and he headed to Swansea.
However after a period of unemployment, and away from his family, he began to feel isolated and disillusioned. Then, at his local Jobcentre Plus he was introduced to The Prince’s Trust Get Started with Football programme, delivered by Swansea City FC. He threw himself into every aspect of the course and his confidence and employability skills started to emerge.
Thabo saw a future as a football coach. He took up volunteer coaching roles at Swansea Academy, before being offered a part-time job as a community coach, which was soon made permanent.

“I realised that The Prince’s Trust had opened the door to the rest of my life and I just had to walk through it. The Trust gave me a new outlook on life and it gave me the confidence, motivation and ambition to succeed.”

Thabo is just one of over 25,000 young people who have been helped over the last 20 years by The Prince’s Trust Football Initiative which, in partnership with the Premier League and the Professional Footballers’ Association, helps develop confidence, motivation and team working skills through sport.

Nat Pieper, Delta’s Senior Vice President Europe, Middle East, Africa and India, said, “We are proud sponsors of the Rising Star Award. Thabo has faced substantial personal obstacles, worked hard to overcome them and is now in sustainable employment as a result of a Prince’s Trust programme – a fantastic achievement! We wish him all the best on the 15th March!”

6 Festival Struggles And How to Deal With Them @Sziget 2017