“I was conscious of a most horrible smell of mould, and of a cold kind of face pressed against my own, and moving slowly over it, and of several — I don’t know how many — legs or arms or tentacles or something clinging to my body.” The Treasure of Abbot Thomas

When one looks over the genre of supernatural fiction there have been many celebrated names. Among them H. P. Lovecraft, Algernon Blackwood and of course Stephen King. But the source upon which they all drew is undoubtedly Montague Rhodes James, the father of the modern ghost story.

Provost of King’s at Eton College and a noted medieval scholar in his own right, M. R. James wrote ghost stories in his spare-time. He would traditionally unveil his new stories at a special gathering in his rooms on Christmas Eve.

He would invite several of his close friends, colleagues and students for a glass of sherry in his study and then afterwards would read aloud by candlelight two of his latest stories of supernatural horror. The very first of these events took place in October 1893 and became a regular occurrence from Christmas Eve 1894 onwards. On that first occasion the stories that James read aloud were two of his best.

The first, Canon Alberic’s Scrapbook, is the archetypal James’ story. It concerns an amateur antiquarian and his trip to a monastery in France. He spends the weekend there and stumbles across some ancient supernatural evil. The evil appears with malign intent towards the end of the story, only to then disappear at the last moment. 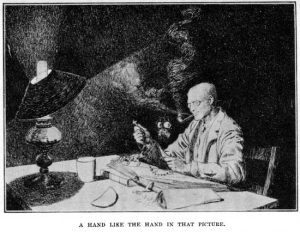 Whereas the second, Lost Hearts, is a fish out of water as far as James’ style goes. It tells the Faustian story of an orphan boy sent to live with his elderly cousin. A cousin whose lust for life has led him to devour the hearts of the Gypsy orphans in his care. Only their spirits come back to haunt him and hunt him down for their vengeance.

“The moon was shining through the window, and he was gazing at a figure which lay in the bath. A figure inexpressibly thin and pathetic, of a dusty leaden colour, enveloped in a shroud-like garment, the thin lips crooked into a faint and dreadful smile, the hands pressed tightly over the region of the heart.” Lost Hearts

It was stories like these, along with other such classics as Oh Whistle and I’ll Come to You and The Treasure of Abbot Thomas, that James collected in his first volume of stories, Ghost Stories of an Antiquary, published in 1904. From there James would publish three more collections: More Ghost Stories of an Antiquary (1911), A Thin Ghost and Others (1919) and A Warning to the Curious and Other Ghost Stories (1925). All four volumes were later anthologised into the 1931 book Collected Ghost Stories, a copy of which adorns my book-shelf as essential reading.

And they are without doubt the best stories of their kind. The 26 ghost stories that James wrote in his lifetime are as timeless to the supernatural genre as the 56 Sherlock Holmes stories of Conan Doyle are to the detective genre are. And the reasons for their longevity are as plain as they are for the Holmes stories.

For it was through these stories that James modernised the ghost story. First by taking them out of the Gothic clichés of castles and dungeons and dangers by candlelight. And then by invigorating them with a terrifying sense of realism that lends a genuine terror to the stories.

“Let us, then, be introduced to the actors in a placid way. Let us see them going about their ordinary business. Undisturbed by forebodings, pleased with their surroundings. And into this calm environment let the ominous thing put out its head. Unobtrusively at first, and then more insistently, until it holds the stage.” M. R. James

The stories are characterised by their first-person narrators. These are the stuffy, intellectual types whose travels take them to isolated locations. To places like the Norfolk coast or the marshes of Denmark. Or the medieval monasteries of the past, for not all of James’ stories were contemporary.

It is then that a discovery of some ancient and mystical artefact is made, an artefact that the protagonist in his arrogance mistreats. It is then that the unsuspecting fools unleash the supernatural evil upon themselves. The protagonists then try to undo the harm they have done, but it is to no avail and the spirits they have disturbed mercilessly hunt them down.

It was these first-person narrators that James used as the most terrifying weapon in his story-telling arsenal. His intention was always to put the reader in the same position as the narrator. To make them wonder how they might respond to such unrelenting terror.

So if we are to think in the vein of a classic James ghost story, the most archetypal of these come from two very different periods in his life. These are Oh Whistle and I’ll Come to You and A Warning to the Curious, from his first and last collections respectively.

In Oh Whistle and I’ll Come to You a stuffy college professor goes to a hotel near the Norfolk coast. During an excursion into a graveyard he discovers an old whistle carved from bone. It is inscribed with a Latin phrase that reads “Who is this who is coming?” He then makes the mistake of blowing into it and from that moment on he is terrorised at night by a supernatural presence both in his dreams and in his rooms. 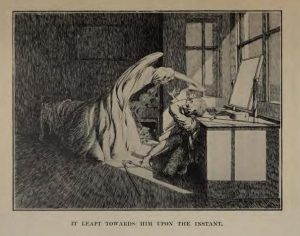 Oh Whistle and I’ll Come to You

In A Warning to the Curious we find a similar situation. An amateur archaeologist heads down to an isolated Norfolk village. He is looking for an ancient Anglo-Saxon crown, unaware that it is watched over by a dreadful curse. He finds the crown but is then pursued by the spirits who protect it. He tries to placate them by putting it back but the spirits are not satisfied and take their revenge.

“When I was making the tunnel, it was worse… Like someone scraping at my back all the time: I thought for a long time it was only soil dropping on me, but as I got nearer the — the crown, it was unmistakable. And when I actually got my fingers into the ring of it and pulled it out, there came a sort of cry behind me — oh, I can’t tell you how desolate it was! And horribly threatening too.” A Warning to the Curious

But that’s not to say that James was a one-trick pony when it came to his ghost stories. For James could be very elusive with the supernatural qualities of some of his stories. Sometimes only alluding to the horror that our protagonists are suffering through as shown in the stories The Stalls of Barchester Cathedral and The Mezzotint.

The former is noted for being out of the normal Jamesian style with two narrators. The primary one is relating his discovery of the papers of the venerable Archdeacon Haynes, whilst the secondary one is Haynes himself. He speaks to us from the past through his diaries that tell of a horror that haunts him during the dark nights of winter. A horror that is never fully explained but only hinted and alluded to.

“My hand was resting on the back of the carved figure of a cat which is the nearest to me of the three figures on the end of my stall. I was not aware of this, for I was not looking in that direction, until I was startled by what seemed a softness, a feeling as of rather rough and coarse fur, and a sudden movement, as if the creature were twisting round its head to bite me.” The Stalls of Barchester Cathedral

But it is the latter, The Mezzotint, which snatches the grand prize for the most chilling of all James’ stories. It describes a college professor who one day discovers a new mezzotint in his room. Upon closer inspection he discovers, to his horror, that it is a living picture that depicts the terrifying kidnapping of a landed lords’ baby in vengeance for those he’d hanged for trespassing on his land.

“What he saw made him very nearly drop the candle on the floor… In the middle of the lawn in front of the house there was a figure where no figure had been at five o’clock that afternoon… Crawling on all fours toward the house… Muffled in a strange black garment.” The Mezzotint

Time and time again James proved himself the master of the ghost story. And few can claim to have come close to him in their description of terror. He is a man who, in the words of Stephen King, could perfect all three levels of supernatural writing (terror, horror and the gross-out) into one single story and still leave us wanting more.

Like Conan Doyle in the detective genre, M. R. James is a source of constant and lasting inspiration to the writers of today. And by injecting realism into his stories James was able to take the ghost story, which had hitherto been derided as the source of the penny dreadful novelettes of the past, and bring it into the 20th Century as a work of literary art.

The Big Music Project Is In Cardiff This Saturday!